Herne Bay keeper Jack Delo hangs up his gloves: I’ve always said that when I feel I’m not performing to the best of my ability and this will consequently have an effect on the team, then that’s the time to call it a day

HERNE BAY goalkeeper Jack Delo has decided to hang up his gloves and take a break from playing football.

The Bay suffered a 3-0 defeat at their bitter rivals Whitstable Town on Bank Holiday Monday, which leaves the club in eleventh-place in the Isthmian League South East Division table with four points from three games. 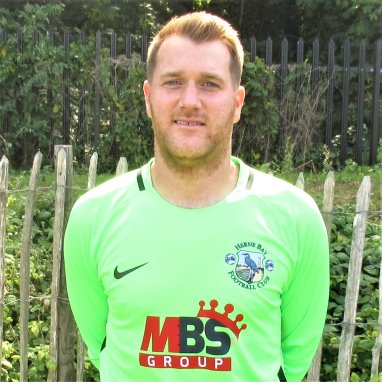 “It is with a heavy heart that I have made this decision,” Delo said in a statement that was published on www.hernebayfootballclub.co.uk.

“Football has always been and always will be a huge part of my life.

“I’ve always said that when I feel I’m not performing to the best of my ability and this will consequently have an effect on the team, then that’s the time to call it a day.

“It’s not fair on the management, team or the fans and I’m certainly not one just to stick around and pick the money up.

“I wish everyone at Herne Bay nothing but success, a club close to my heart and thanks for 400 plus games and the memories.”

His manager, Ben Smith, added: “With over 400 appearances for the club and many more with Folkestone Invicta and Canterbury City, Jack has been engrained in the local non-league scene for a long time and was always regarded as one of the stand out keepers at these levels.

“He rolled back the years last season playing a leading role in an against-the-odds FA Vase Semi-Final run showing form is temporary and class is permanent and showed me personally fantastic loyalty in the most testing of times.

“It is unfortunate but things come to a natural end and that is exactly the case here.”

Smith takes his side to third-placed Cray Valley (Paper Mills) - the side that denied Canterbury City a place at Wembley last season -  on Saturday (15:00).

Smith has found a replacement in former Thamesmead Town goalkeeper Rob Budd, who has transferred from Hullbridge Sports in the Isthmian League Northern Division, having played for Brentwood Town last season.