The celebrations will live long in the memory and we’re already looking forward to testing ourselves at the next level, which we know is a big step but hope to continue surprising a few people, says title-winning Welling Town chairman Kevin Oakes

WELLING TOWN chairman Kevin Oakes promises his club will surprise a few people next season after celebrating promotion at the weekend.

The Boots claimed the Southern Counties East Football League First Division title after winning 5-1 at Lydd Town at the end of their debut season at this level. 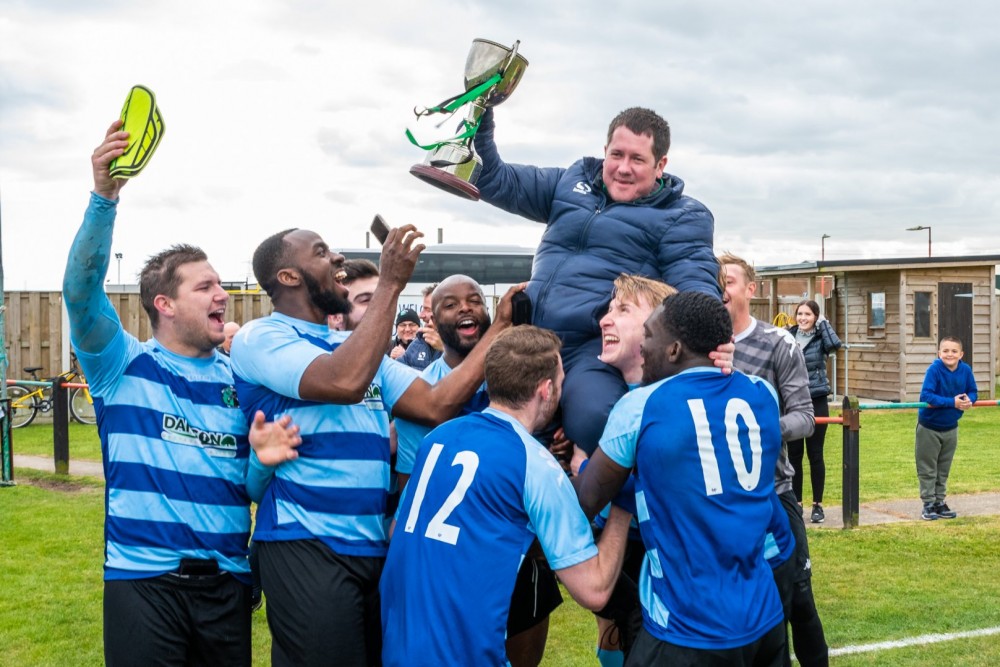 Welling Town fought off Erith & Belvedere by winning the title by just one point and will be playing in the Southern Counties East Football League Premier Division when the season kicks off again in August.

“The players and management, past and present, have helped make us successful and this is a reward for their hard work and dedication,” Mr Oakes told www.wellingtown.co.uk.

“The time and sacrifices made to work full-time and then train and play two or three times a week is not easy, but that commitment was there and the lads have rightly got their rewards for everything they have put in.

“The celebrations will live long in the memory and we’re already looking forward to testing ourselves at the next level, which we know is a big step but hope to continue surprising a few people.”

Welling Town finished top of the pile on 78 points from their 34 league outings, followed by Erith & Belvedere (77); Kennington (74); Bridon Ropes (69) and Sutton Athletic on 64.

Bridon Ropes were top of the table going into Easter but a stadium ban for their manager James Doherty, saw his side suffer three league defeats on the spin, including losing 4-1 after extra time to Erith & Belvedere in the London Senior Trophy Final at Champion Hill on 24 April.

“Our thanks and commiserations must go to our close rivals Erith & Belvedere, Kennington, Bridon Ropes and Sutton Athletic, who have all contributed to making the season a fantastic one for the neutral and taken things right down to the wire,” added Mr Oakes.

“All four of those club’s are more than capable of competing on and off the field at the upper end of the division as they have clearly demonstrated all season, not just when we have faced them, but also when we have been to watch their games and the rivalry between us and them is what competitive football at this level is all about.

“We’ve made new friends at management and board level and they have always been very respectful towards up.

“We’re disappointed that it appears the re-structure of the pyramid may make it difficult for any of them to join us this time around but we hope they’ll all be joining us in the near future at Step Five as they are deserving of that opportunity.

“And that you again to the Southern Counties East Football League officers and all member clubs for making us feel so welcome in our debut season.”

Manager Louis Dean replaced Richard Dimmock at the end of November 2018 and was in charge of 17 games, winning 12 of them.

Striker Ryan Golding was their leading goalscorer, having notched 35 goals this season.