For the first time, the visit allowed an opportunity to reflect and it started to dawn upon us that this is actually a reality, says Wembley bound Cray Valley boss Kevin Watson

CRAY VALLEY (Paper Mills) manager Kevin Watson says it was a privilege to step on the hallowed turf at Wembley Stadium on Tuesday ahead of the Eltham based club’s biggest game in their 100-year history.

The Millers face Chertsey Town in The Buildbase FA Vase Final on Sunday (12:15), having celebrated winning the Southern Counties East Football League Premier Division title on the final day of the season. 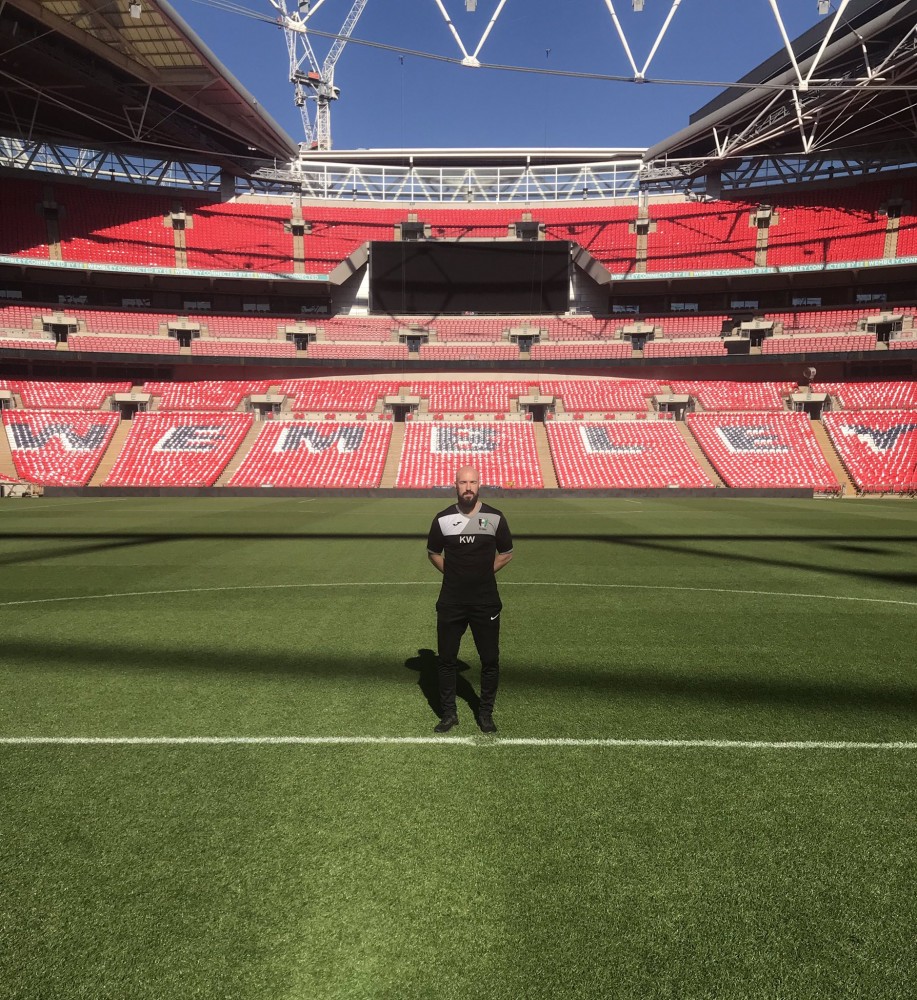 Watson’s side came away from Canterbury City with a 2-0 win on 27 April.  The Millers beat Canterbury City 2-1 on aggregate in The Buildbase FA Vase Semi-Finals to set up Sunday’s date against Dave Anderson’s men.

“The majority of the squad and management visited the stadium on Tuesday,” said Watson.

“We had a tour of the ground and had 10 minutes on the pitch.  Whilst the public can pay for a tour they are not allowed on the pitch and so that was a privilege in itself.

“Some players could not get out of work and others chose not to attend as they wanted to wait until Sunday for that experience.  I fully respect their decisions.

“It was my wife’s birthday on Tuesday and her present was me sending a selfie on the pitch.  That went down well, as you can imagine!

“The pitch is even more spectacular than you could imagine.  I would describe it as nothing short of perfect.  The players found it humbling to see where their family and friends would be sitting and the great view they will have.

“For the first time, the visit allowed an opportunity to reflect and it started to dawn upon us that this is actually a reality.

“Although most were brought back down to earth when back at work on Wednesday!

“I don’t think that the achievement has truly sunk in yet and possibly won’t until after the event, when it becomes a memory.”

Watson’s players, meanwhile, have been ticking over ahead of their big day.

“We have trained twice a week and had an in-house behind closed doors friendly on Saturday at Dartford FC,” revealed Watson.

“We selected a group of players to play against who were all Bostik League and National League South standard. I thank all those players, as well as (Cray Wanderers’ assistant manager) Joe Vines who managed the side.

“It was a good practice for the players and the match was played at a good intensity.

“Our final training session before Sunday will be this evening. We will travel to the hotel on Saturday and watch the FA Cup Final (Manchester City v Watford) together at the hotel.

“I'm sure it will be a surreal experience watching a match and players of that calibre on the pitch that our players will grace the following day.”