We can achieve something special and get this club in the League, says Bromley boss Neil Smith

BROMLEY manager Neil Smith says he wants to get the club into the English Football League.

Smith, 47, has been at Hayes Lane since the summer of 2011 and during his time as Academy boss, Mark Goldberg’s assistant and now manager, the club has progressed both on and off the field. 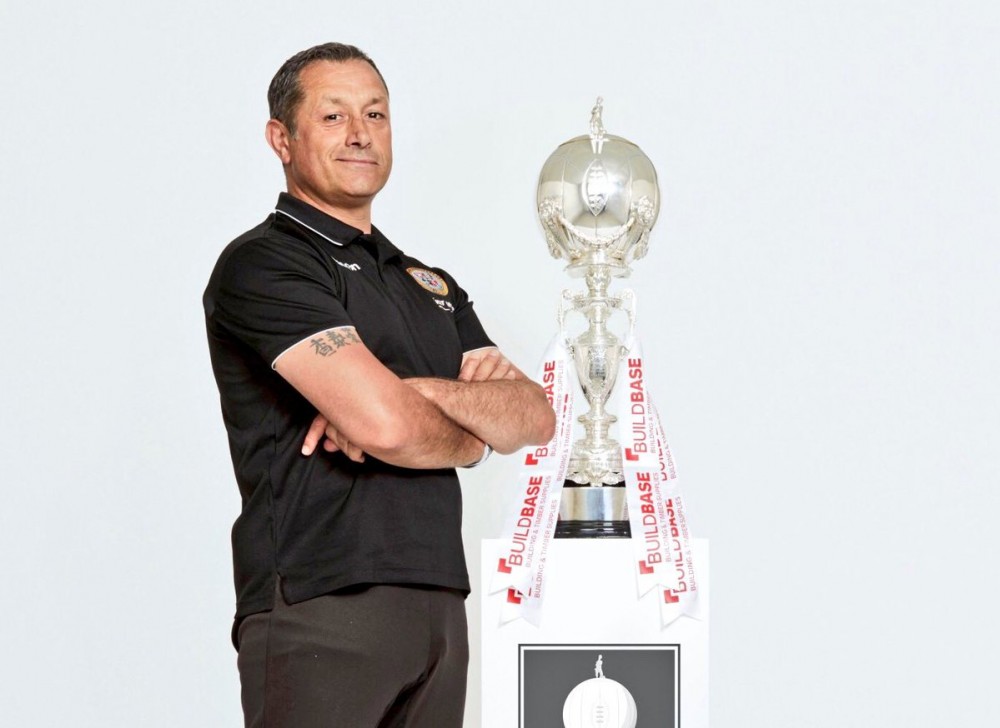 Bromley manager Neil Smith guided his home-town club to The Buildbase FA Trophy Final in May 2018 but lost to Brackley Town on penalties at Wembley Stadium. Smith now wants to guide the club into the EFL as he prepares for their fifth campaign in the Vanarama National League.

The Lillywhites are now preparing for their fifth season in the Vanarama National League and Smith is keen to make it their greatest yet.

“We highlighted the players towards the end of the season that we wanted to bring in who would improve our squad and give us a chance for this season,” Smith told season ticket holders at a meet the manager event.

“The season before we had the Cup final to deal with and we finished so late.

“We wanted to get our business in a lot earlier because you see this division now, it’s getting stronger and a lot harder to get out of this division each year, so we highlighted the players we wanted and got them in as soon as we can.”

Smith added:  “Nothing’s guaranteed on paper but I think I’ve got a very good, competitive squad.  It’s going to come down to how hard we train until the first game of the season.  You also need that luck, which I didn’t think we had last year with injuries and everything else.

“The only thing I’ve ever wanted at this club is to produce a team that the supporters are proud of.  I’ve highlighted players who are going to give their all, they’re good quality and they’re good guys as well.”

Smith revealed that Salford City – promoted alongside champions Leyton Orient after beating AFC Fylde 3-0 at Wembley Stadium in the Promotion Final – had a four million pound budget – and Bromley are classed as one of the smaller clubs in the full-time fifth-tier of English football going by history, stature and crowds.

“Last year we probably stood still and in this division it’s as good as going backwards, not in a bad way,” admitted Smith.

“I want to strive to get better and better every season.

“We’re trying to bring in players who keep bettering this club.  We have got ambitions that are way above just staying in this division.  I want to get this club in the League, it’s a big ask.”

Bromley were the thirteenth best supported club in the National League last season with average crowds of 1,470.

“We took 20,000 to Wembley and I want to get this place buzzing and a hard place for people to play, like when we were playing against Leyton Orient and the last game of the season.

“I want to fill all those seats up and when we get the (main) stand extension, this club really wants to go places and producing a team that you’re proud of.”

Bromley have finished in fourteenth, tenth, ninth and eleventh-place in the National League and when asked what success and failure will be this coming season, Smith replied: “Failure is getting relegated!  My own opinion and my own desire and I’ve expressed this with the boys, we want to be up and around that top 10 and around the play-off hunt.

“The club’s in that little group are getting bigger and bigger and I generally believe we can be competing at that level so I want to be in and around the play-offs.

“I know it’s a tough division but to be staying in that top half for the last three years has been an immense job that the boys have put in because this league is not non-league any more, it’s a professional league.

“The club’s we’re playing against. It’s not easy for us to be competing where we are and I think it’s a massive achievement for this club.

“Ultimately I want to get promotion. How or when we do it we’ll see every season. Failure is relegation but I don’t want to be any lower where we finished last season. I want to be looking at top half, if I can.”

Smith admitted that his home-town club have come on leaps and bounds since the first time he walked through the door.

“This division is becoming more and more professional, more full-time club’s, more League players. What I’ve leant how difficult this division is, it’s getting stronger and stronger,” said Smith.

“What Salford did they had this ideal that players are worth a certain amount of money and you’re competing against all these clubs.

“What we try to do, we’ve tried to become a professional outfit, without the money, so we’ve got the (training) facility at the back.  We used the gym next door and we’ve got the (new South) Stand.

“We’re better equipped this year than we’ve ever been.  It’s the best this club has ever been, it’s the most professional it’s ever been.

“The club has grown since I walked through the door.   We trained at Norman Park until the sun went down so in October we’re scrambling around for a five-a-side pitch to come and train.  We haven’t got that anymore, we’ve got our own facility. We’re based at Bromley Football Club, where we work and where we train.  It’s an open training session for supporters to come and watch us train. We’re an open club, we don’t hide anything from anybody.

“What have I learnt? I’ve learnt that you have to keep moving, keep adapting.  You’ve got to get the best you can and if it’s not the best money terms, it’s the best training.

“But we will keep growing and keep evolving as a club. If you were here when I walked through the door eight years ago and I know we’ve got supporters here who were a lot earlier than me, you won’t recognise this place but we will keep growing and adapting until we get into the League because once you’re in the League I don’t want to come out of it. I want to go again.

“I know all the directors and an owner that wants to get into the League. The ambitions of this club is to go and achieve the ultimate dream and to get this club, Bromley Football Club, in with the big boys.”

The Hayes Lane faithful want to watch players who put their heart and soul into the club and continue to upset the big boys in the National League by pulling off some shock wins.

“I think the one thing that you’ll get out of the squad this year is they play for this club, they play for each other and play for success.  No one’s coming here for any other reason than to better themselves and better this club.

“You always need that luck.  We’re going to make this a special season. I said this three years ago and I was talking about it the other day with (my assistant manager) Mark Hammond.  I wanted to get this club to Wembley and I achieved it.

“I now want to get this club in the League. It’s the goal of the management, the team, the owners of this club and if we stick together, there will be sometimes where we pull each other through, and we can achieve that dream, I really do. We can achieve something special, that’s our aim.”

Bromley open their pre-season campaign with a visit of relegated Championship club Fulham, who come to Hayes Lane next Saturday 6 July (15:00).