My target is to rebuild a team and see where it takes us, says Whitstable Town boss Will Graham

WILL GRAHAM says he is really happy to get his first shot in management at Whitstable Town.

The 29-year-old was given the opportunity by chairman Gary Johnson to promote himself from first team coach to manager after Jim and Danny Ward decided to return to Ramsgate. 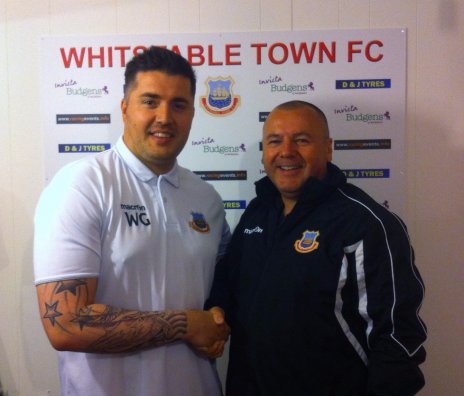 CONSOLIDATE: Will Graham (left, pictured with chairman Gary Johnson) says he has completed his apprenticeship and is ready to take charge of Whitstable Town.
Photo: Whitstable Town FC

Whitstable Town finished in a personal best of eighth-place in the Ryman League Division One South table in what was to be the Ward brothers’ only season in charge at The Belmont.

“I’m personally happy to get my first shot in management,” said Graham, 29, who got the job on 7 May.

“It’s disappointing that Jim and Danny have decided to go to Ramsgate, that’s where they see their career going.

“I saw my career venturing into management at some stage and the opportunity arose at Whitstable and that’s’ what I’ve walked into and I’m happy and ready to go.”

Graham fulfilled a hands-on approach as first team coach last season and is ready to make the step up.

“I’ve done a lot of work with the first team last year,” he said.

“I took on a lot of responsibility as a first team coach trying to get the boys’ to play a certain type of football.  I’m not saying it was all down to me but it was our most successful season as a Ryman League team at the club and I’d like to think a lot was done to the work I did with the boys’.

“I learnt a lot from Jim and Dan and the ways they particularly manage as managers and I’ve taken a lot of that and took it into my own.”

Ramsgate have confirmed that goalkeeper Luke Watkins, central defender Joe Kane and striker Tom Loynes have put pen to paper having played for Whitstable Town under the Ward’s last season.

Striker Ian Pulman has also been approached and there’s talk that he has been offered a lucrative deal to return to Southwood Stadium.

Graham said: “It’s disappointing that the players have decided to go to Ramsgate – I think the lure of the bigger financial packages have cushioned the blow for them sort of going.

“It is a squad rebuild. It is a new manager into the club but it’s something that Whitstable done last year with Jim, Danny and myself. We had to rebuild the club’s three teams last year because we had no reserves, no under 18s and we had three squad members left from the first team.

“The club as a whole rebuilt last year and we’ll rebuild this year. Ok, it may be tough but it’s something that the club’s not done before. It may take time but it will be rebuilt and it will be something that we’ll be looking to do, to build foundations for the next couple of years’.”

Graham is tying up some loose ends and will be in a position to unveil his management team shortly.

He said: “I am talking to a couple of people at the moment but I’m looking to finalise over the next couple of days really. Everything’s is in place with the management team.  I’ll be able to let people know what management team I’ve got in place.”

The new Whitstable Town boss admits he is looking to consolidate in the Ryman League Division One South next season.

Graham said: “My targets for next year is to consolidate – that’s not relegation. I’m not looking to sit above relegation but with the rebuild of a new team it’s going to be tough.

“Every single team in Kent at the moment are looking at the same players. It’s a competitive market. I won’t overspend on players. Players’ will get paid what I can afford and what I feel they’re justified to be paid.

“This year will be suck it and see as it was last year. Our target last year as a management team was to beat the club’s record positioning and points.  The highest place was fourteenth. My target next year is to consolidate and see where it takes us. That’s not relegation, that’s not promotion. My target is to rebuild a team and see where it takes us.”

When asked what he is looking forward to the most, Graham replied: “I’m looking forward personally to show what my ability is within football. I may be only 29 but I’ve been involved in the game for over ten years’ and I’d like to say I’ve done my apprenticeship. I’ve learnt from the bottom up and I’ve learnt my role and spent a lot of money to get training.

“I’ve been ready now to be in this level for the last couple of years now and I’m ready to manage.  I’m really looking forward to looking to get among experienced managers and show them what I’ve got and what I can offer them as well as a rival.”

Meanwhile, Graham reacted to the news that his former Ramsgate team-mate and fellow Margate resident, Danny Wisker, 29, is a contestant on the latest television reality show Big Brother.

He said: “Yes, I know Danny Wisker very well. I played with him at Ramsgate under Jim and Danny (Ward).

“He literally lives down the road from me so I see him quite often. We both live in Margate so we go to the same gym as him.  We see each other quite often, so I won’t be seeing him for quite a while!”