WELLING UNITED captain Ricky Wellard has told his team-mates not to have any regrets when they leave the pitch on Sunday.

The Vanarama National League club welcome Sky Bet League Two outfit Carlisle United in The FA Cup at Park View Road, with a place in the Third Round up for grabs for the winner. 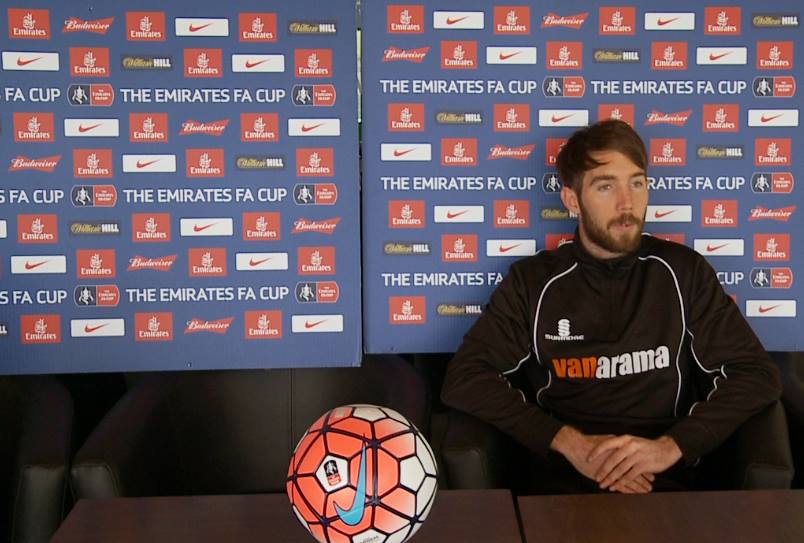 BATTLE CRY: Welling United skipper Ricky Wellard has told his team-mates not to have any regrets during their FA Cup Second Round tie against Carlisle United on Sunday.
Photo: Tom Riding/Welling United FC

Wellard issued a rallying cry to his team-mates ahead of the winner-takes-all showdown, which could see the Kent club come up against a Premier League giant in the Third Round in January.

“Have no regrets,” was the message coming out loud and clear at Friday’s press conference at Coldharbour Leisure Centre in Mottingham.

“Make sure when we come back in to the changing room after the game, just make sure we can look at each other in the eye and you’ve got no regrets for yourself because to come back in and look at yourself in the mirror and have regrets, it’s not a nice experience in football so just have no regrets.

“Keep calm! Emotions will be high but it’s important that we keep a clear head and we carry out our jobs the best we can.

“We’ve been given good information from the management team about Carlisle and it’s down to us to carry out those instructions on the pitch so while emotions are high and the passion and the blood is flowing, it’s important to keep a cool head so you can play to the best of your ability.

“Someone’s got to get in that Third Round and get a Man United away and get to the Emirates (to play Arsenal) – why not us? It can be us and we’ve got to try our best to make it us.”

Wellard, who signed from Sutton United, is relishing the chance to lead the Kent club out in their fifth Second Round appearance.

“Very proud moment for me. I’ve played in the Second Round before but not leading the team out as a captain so it’s a big moment for me on Sunday,” he said.

Welling United will have one last training session on Saturday ahead of their biggest game of the season so far.

“I think there’s excitement around the place,” said McEntegart.

“I think we can go into that game as the underdogs, at home, maybe not feel the pressure is on us.  We can just try to take the game to them and hopefully get the result.

“You can tell in training everyone’s got the extra yard in their legs and the sharpness has gone up a little bit and the intensity and the work-rate and everything.

“You can have some great memories in The FA Cup and everyone is all built up now for Sunday.”

Wellard wants Welling United fans to give their side passionate support from the open terraces at Park View Road.

“It’s a great opportunity for us to play in front of our own fans. Hopefully Carlisle will bring down their hardcore supporters for the long trip so everyone’s just geared for a good performance and hopefully a great day for the whole club in general and the fans.

“I think all the players would love the fans to get behind them. I’m sure they will.

“We can nick a goal and get in front and maybe the fans can encourage us more.

“It’s a great opportunity, especially with it being a home draw.

“Carlisle have got to travel a long way, a slightly earlier kick-off as well. It might mess up some preparation for the game so hopefully the fans can get behind us and we can just get the result.”

Wellard scored the first goal in Welling’s 2-0 win at Evo-Stik Northern Premier League Barwell and is keen to be Welling’s hero on Sunday.

“As a group and as individuals we’ve got players who can rise to the occasion,” he said.

“I think in the previous round (at Grays Athletic) we’ve gone away from home, even though we haven’t necessarily played well, we’ve managed to hang in the Cup tie and then we’ve put in a battling performance away at Barwell so I think as a group we’ve definitely got it in us to rise to the occasion.

“You can be that non-league hero to get the winner in the last minute or score the goal to get your team through.

“It’s a dream, isn’t it. I’d love to. I’ll be very focused in trying to score. I need to add a few more goals. I’ll be trying my very hardest to make sure I get myself a goal.”

The Welling management team have been positive leading up to the game and have drilled confidence into the players to go and cause a FA Cup upset.

Wellard said: “The tie’s very much up for grabs. I don’t see any favourite in the game. We’re good at home. We enjoy playing at home. Our fans will get behind us again, like they always do. Our league form is generally good at home apart from Southport. It’s all geared up for a great day and hopefully a great day for the club.

“The management has given us good information on them, on our jobs during general play and set pieces and it’s just down to us individually and as a team to take that information on board and perform.”