FA CUP SPECIAL: It's a great opportunity for us to get to the magical Third Round, says Welling United boss Loui Fazakerley

WELLING UNITED manager Loui Fazakerley says his players can pull off a FA Cup upset against Carlisle United on Sunday.

The Wings were in upbeat mood at the press conference at the club’s hired training ground at Coldharbour Leisure Centre in Mottingham on Friday ahead of the winner-takes-all Second Round showdown at Park View Road. 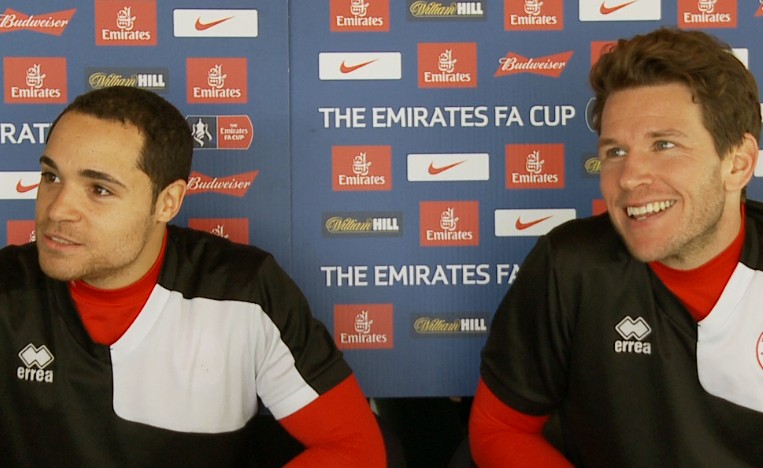 
Welling United are in the bottom six in the Vanarama National League table on 24 points from 23 games.

Carlisle United play in Sky Bet League Two and arrive in Kent sitting in the top six on 33 points from their 20 league outings.

A crowd of over 2,000 is expected to flock through the turnstiles at Park View Road to see if Welling United can reach the Third Round for only the second time in their history.

The Wings started their FA Cup campaign in the Fourth Qualifying Round and needed a Sam Corne salvage act to force a replay, after escaping from Aveley’s ground with a lucky 1-1 draw against Ryman Premier League side Grays Athletic.

But four goals from Xavier Vidal ensured the Wings reached the First Round after winning the replay 4-0 at Park View Road.

Welling United came away from Evo-Stik Northern Premier League side Barwell with a 2-0 win in Leicestershire to set up a tie against Keith Curle’s side.

“Of course, we’re all looking forward to it, massively,” said Fazakerley.

“It’s going to be a great occasion for everyone involved in the club and it’s a great opportunity for us to get to the magical Third Round.

“It’s a good achievement, I think it’s only the fifth time (in the Second Round) in the club’s history so it’s an achievement in itself.

“The Third Round is obviously that big round when the Premier League teams come in so it’s good motivation for the lads going into the game.

“We know (the players) are going to be up for it. We know they’re going to give everything they’ve got and if they do perform on the day, as we know they can, we can pull off an upset.”

Fazakerley revealed he’s got a selection headache going into the game and has some big decisions to make.

“As it stands now, we’ve got a full squad available, which is great,” said the Wings boss.

“It’s a good headache to have. We’ve got a lot of players to choose from so yes, it’s good.

“The boys have trained well this week. We’ll go away and we’ll pick what we think is our best 11 to win the game on Sunday.

“It’s a one-off game so we’re not going to go for the draw because we definitely don’t want a replay up on a Tuesday night, so we’ll look to win the game in normal time. We’ll come up with a game plan to do that.”

Welling United have scooped £30,500 in FA Cup prize money after beating Grays Athletic and Barwell and will claim a further £27,000 if they send Carlisle United crashing out of the competition.

Carlisle United travelled to Plymouth Argyle in the First Round making the long trip worthwhile by winning 2-0.

The Wings will scoop a further £12,500 for broadcasting rights as the game will be shown on several television channels around the world as well as being covered by BBC Five Live.

“The financial side of things is massive as well so it’s going to be great all round,” said Fazakerley.

“If we go and win that game, the players will have the opportunity to go and play in potentially a massive game.

“Financially for the club it’s going to bring in more money as well so it’s a win-win.

“Of course, there’s always a giantkilling and they (the national press) like a cup upset. Yes, if we play as well as we can play, there’s no reason why it can’t be us.

“It’s a good opportunity for the lads on the pitch and it’s also a great opportunity off the pitch for us to pit our wits against league opposition and league management so it’s a game we’re looking forward to.”

Fazakerley and his coaches Matthew McEntegart and Paul Barnes have done their homework on Carlisle United, who have scored 38 goals and leaked 36 goals in the League this season.

“We know that they’re doing well in the league and they’re scoring a lot of goals,” he said.

Fazakerley has this message for his players going into the big game.

“Be brave and positive. The players’ believe in themselves and having the quality to go and score goals.

“We’ve seen areas where we can go and expose. We’ve got to work on exposing those areas.

Terrace tickets are available on the day of the game, although seating has been sold out.  The game is NOT all-ticket but fans are asked to arrive early.  The game kicks off at 14:00.