FA CUP SPECIAL: It will be a battle but we're up for it, says Welling United midfielder Sam Corne

WELLING UNITED’S saviour Sam Corne says he is ready for the battle against Carlisle United in The FA Cup Second Round on Sunday.

Corne, 19, popped up with eight minutes remaining to save Welling United’s bacon in their uninspiring 1-1 draw at Ryman Premier League side in the Fourth Qualifying Round, before they finished off the job at Park View Road with a 4-0 win, courtesy of Xavier Vidal’s four goal blast. 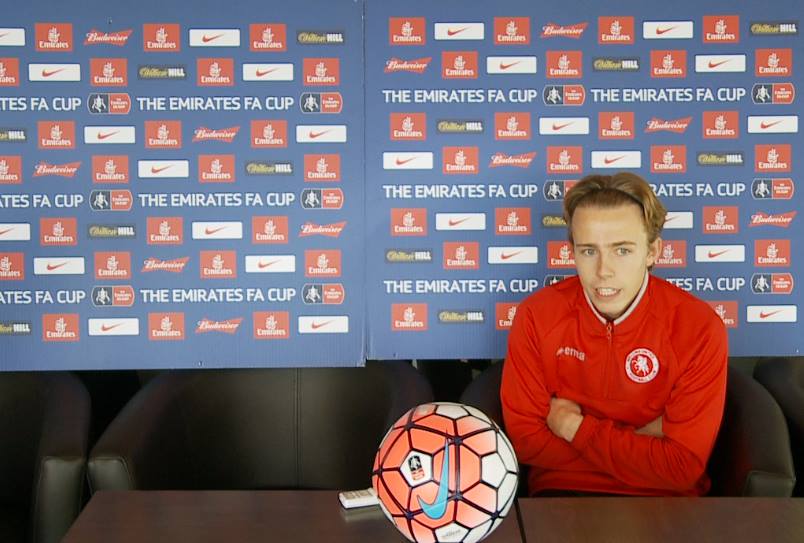 The central midfielder and vice-captain is looking forward to the Park View Road winner-takes-all showdown.

“We’re definitely going into it as the underdogs against a big side,” said Corne at Friday’s press conference.

“We’ve got no pressure really so it’s basically like a free Cup Final, just got to try to get the result that we want to get into the Third Round.

“Carlisle are a big side. It’s going to be a massive game for us. It will be a battle but we’re up for it.”

Welling United’s players train three mornings a week and Corne and his team-mates are looking forward to impressing inside the shop window.

“It’s a great opportunity for all the lads, especially when a majority of the boys want to go higher and get into the League. It’s a great chance to show what they’re capable off as a team and as an individual.

“As we’ve seen anything in The FA Cup goes. You’ve seen lower league teams beat League sides so we’ve got to be on our game at the weekend and hopefully get that win that we want so bad.

“Because it’s a FA Cup game we’ll have more people turn up to support the boys and the bigger the crowd I think there’s more motivation we get behind us to show what we’re capable off.

“It’s the first time I’ve played in the Second Round and if we do win it’s a big achievement to get into the Third Round and having a big dog.”

Welling United’s only time in the Third Round came back in 1989 when Blackburn Rovers won 1-0 at Park View Road.

“We haven’t done it for a long while and it will be a good achievement for the club if we can do it and financially wise a bit of money for the club as well,” said Corne.

“Yes, anything’s possible. The FA Cup is full of upsets and I don’t see why Welling as a team, if we’re on our job we can make an upset on Sunday.”