Jamie Day returns to Welling United as coach: I have failed to commit the time required to be as thorough as I have been in the past as a manager at the same time as all has been required of me as the new owner, admits boss Mark Goldberg

The 37-year-old has almost unbroken success with the Wings, having first returned to the club as a manager in 2009 when the club were fighting relegation in Conference South. 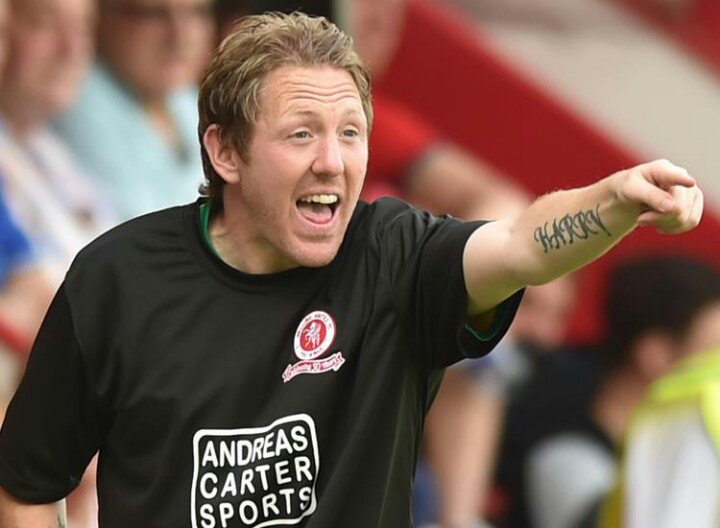 “It has been no secret that I have been looking for the right man to bring in to assist Harry Wheeler and I,” Goldberg told www.wellingunited.com/wp.

“In Jamie Day (pictured, above) I think we have found the missing piece of the jigsaw.  Jamie had fantastic success as manager of this club in the past and is on record expressing his love of our club and also the supporters.

“I am sure our fans will welcome him back as much as I do.”

Goldberg feels that Day’s appointment will help him provide the attention to detail that has been missing due to his commitments of the pitch and will be a big boost for the club as they bid to climb out of the relegation zone.

"I have failed to commit the time required to be as thorough as I have been in the past as a manager at the same time as all has been required of me as the new owner,” admitted Goldberg, who guided his old club Bromley to their first title in 54 years when he guided The Ravens to the Conference South title in 2015.

Goldberg added: “Jamie’s appointment will ensure that we have all bases covered as we strive to push up the league.

“I did not want to dismantle what I believe is a squad with a good foundation and having first tried to bring Jamie into my management team four seasons ago at Bromley, I am delighted to have agreed terms with him to join myself and Harry.

“I have confidence that we are now equipped to provide the coaching and support to our squad that will enable them to get results and improve our league position to where it should be.”

Day return to Welling United with the club struggling in the bottom three of the Vanarama National League South table, having collected two wins, two draws and 10 league defeats this season, three points adrift of safety.

Day is a fans’ favourite at Park View Road.  He led the club to the Conference South title despite financial restraints in April 2013 and has since managed Ebbsfleet United and Braintree Town during short spells, which was sandwiched by a stint as Adrian Pennock’s assistant manager at Forest Green Rovers last season, where the pair helped the Gloucestershire outfit towards the play-offs, before they were controversially sacked before the end-of-the-season lottery could take place.