We'll give everything we have to get the job done, says VCD Athletic boss Tony Russell

VCD ATHLETIC manager Tony Russell says his side will give everything that they’ve got to maintain the club’s Ryman Premier League status on Saturday.

The Crayford-based club pulled off a shock result when they came away from Margate with a 3-0 win last weekend. 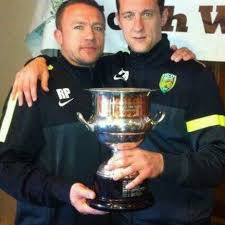 SURVIVAL BID: Ray Powell and Tony Russell will keep VCD Athletic in the Ryman Premier League with a home win over Billericay Town on Saturday.


Goals from James Duckworth, Leigh Bremner and Michael Power’s fifteenth-goal of the season sealed the victory at Hartsdown Park and The Vickers will take their survival bid to the last game.

They are in nineteenth-place in the Ryman Premier League table on 50 points and they must claim at least a draw to beat the drop.

Tonbridge Angels, in sixteenth-place on 51 points are safe, but Harrow Borough, Canvey Island, VCD Athletic and Lewes are on 50.

Peacehaven & Telscombe, who were promoted last season, are below the safety line on 48 points and Witham Town (who came up with Vickers as play-off winners), AFC Hornchurch and Bury Town have been relegated.

If Peacehaven & Telscombe lose or draw against at home to Hampton & Richmond Borough, then VCD Athletic are safe.

Russell knows his side must claim a point on Saturday, but a win will definitely keep the Crayford outfit in the Ryman Premier League for a second season.

But if the Sussex side win and VCD lose then it could go down to goal-difference and The Vickers may face a hearbreaking final day relegation.

“We continued the good form with a 3-0 win away to Margate on Saturday,” said Russell.

“Margate have a really good side so to go there and control the game and limit them to very little is very pleasing but we can’t get carried away as we haven’t done anything yet!

“What we have done is given ourselves a chance. Five games ago we were dead and buried!”

Billericay Town visit Oakwood on Saturday and the club have given fans’ an opportunity to pay what they want to watch the game.

“It’s in our own hands so we need to make sure it stays that way and that means getting something at home to Billericay on Saturday,” said Russell.

“I’ve watched them twice in the last couple of weeks and they will be a handful.  The front three are a problem if you don’t deal with them.

“We will train tonight and work on a couple of things to try and negate them.

“The club are doing a “Pay what you want Day,” it would be a great help to have a big crowd cheering the players’ on.”

Russell guided VCD Athletic to the Ryman League Division One North title on a dramatic final day of last season and admits he’s going to put chairman Gary Rump through the mill once again.

Russell said: “I must apologise to the chairman for once again taking things to the last game! I know he will be a bag of nerves but me and the boys will give everything we have to get the job done.”