Tonbridge Angels boss Steve McKimm signs new contract: I'm very pleased the board have shown their faith in me

TONBRIDGE ANGELS manager Steve McKimm has signed a new contract that will keep him at the club until the end of next season.

McKimm’s first season at Longmead Stadium was a period of transition as the club finished fifth-from-bottom in the Ryman Premier League with a league playing record of 13 wins, 13 draws and 20 league defeats, finishing four points of the four clubs that suffered relegation. 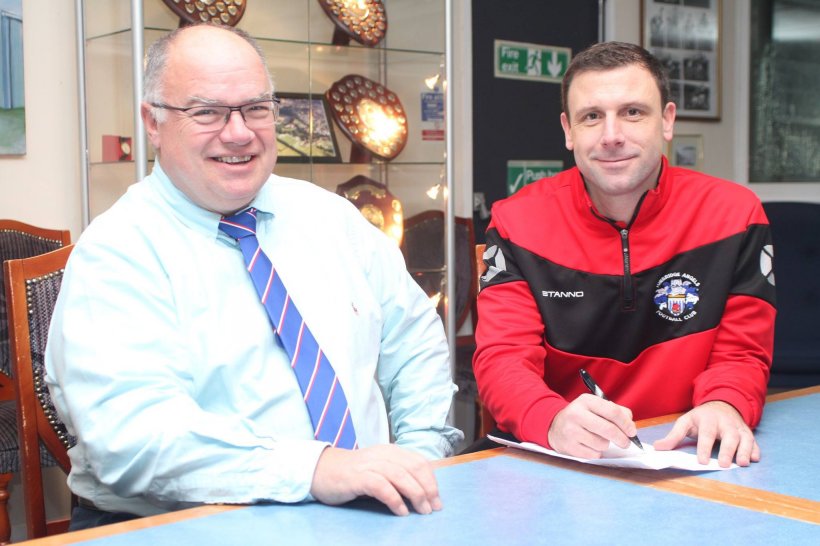 DONE DEAL: Steve McKimm (right) signs a new contract
that will keep the Tonbridge Angels manager at Longmead
Stadium until the end of next season. He is pictured next
to chairman Steve Churcher.
Photo: Tonbridge Angels FC

However, McKimm turned things around last season as the Angels finished in fourth-place with a league playing record of 24 wins, 13 draws and nine defeats.  They finished 10 points adrift of promoted champions Hampton & Richmond Borough but were defeated 2-0 by East Thurrock United in Essex in the semi-finals of the play-offs.

This season, Tonbridge Angels are on course for another finish in the play-offs and after beating Hendon 3-1 at Longmead Stadium, and sit in seventh-place in the table with a league playing record of 13 wins, 5 draws and eight defeats.

Tonbridge Angels are only a couple of points behind fifth-placed Dulwich Hamlet going into Tuesday night’s home game against Burgess Hill Town.

Chairman Steve Churcher told www.tonbridgeangelsonline.co.uk yesterday that he is delighted to keep McKimm at the club.

“This was an unanimous decision by the board and we are delighted to have a manager of Steve’s undoubted quality with us next season.”

McKimm added: Obviously I’m very pleased that the board have shown their faith in me.  Both myself and my family have a great affection for this club and the people who run in.

“This now allows me to start thinking about next season irrespective of where we might be playing.”