A crowd of 2,268 saw Steve McKimm’s side seal the victory courtesy of attacker Chinedue McKenzie’s 12th goal of the season and a last-gasp penalty from the outstanding wideman Joe Turner, who notched his 17th goal of the campaign. 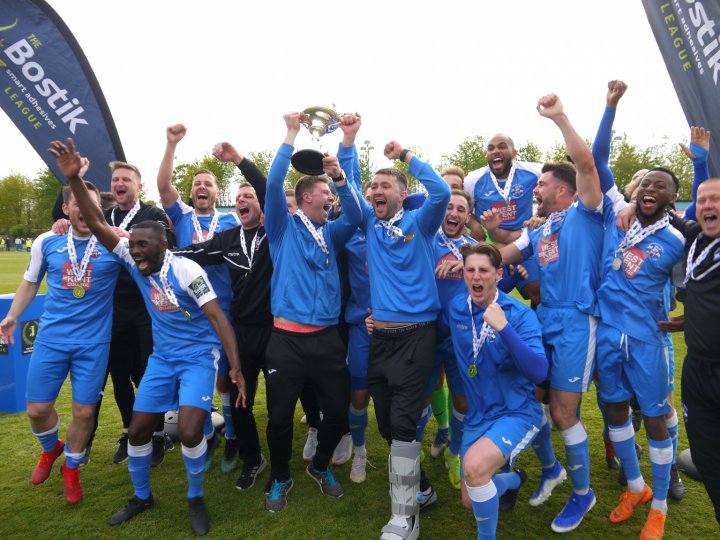 Tonbridge Angels celebrate winning the Bostik Premier Division Play-Off Final - but they will only win promotion into the National League South with a win at Metropolitan Police in the Super Play-Off Final next Saturday.
Photo: Isthmian League

Both sides were reduced to 10 men with just four minutes of the first half remaining as centre-halves Ollie Cook (Merstham) and Sonny Miles (Tonbridge Angels) were both red-carded by referee Michael Ryan following a flash-point inside the Tonbridge Angels box.

McKimm’s men now travel to Metropolitan Police on Saturday 11 May (15:00) to contest the one-off Super Play-Off Final at Imber Court in East Molesey with the winners celebrating promotion into the National League South.

There were contrasting styles at Longmead Stadium this afternoon with the Angels playing a direct style of football, while Hayden Bird’s men kept the ball on the deck and sprayed the ball around with central midfielder Kenny Beaney pulling all the strings in a 4-2-3-1 formation.

Tonbridge Angels started the game on the front foot but it was Merstham that created the first chance inside the opening nine minutes.

Merstham left-back Ben Harrison linked up with winger Fabio Saraiva down the left and Kershaney Samuels fed the ball into Saraiva, who flashed a first time right-footed drive just past the foot of the near post from 18-yards.

Tonbridge Angels went route-one to create their first opening within a couple of minutes.

Goalkeeper Jonathan Henly launched a big kick up field, which was flicked on by striker Tom Derry for McKenzie to hook his shot into the keeper’s hands from a central position a couple of yards inside the Merstham box.

Merstham weathered the storm after 15 minutes and they should have done better when a long ball put them through.

Merstham’s central midfielder clipped a diagonal cross which sailed over the head of Tonbridge Angels’ right-back James Folkes but Merstham’s 19-goal striker Walter Figueira swept his shot into the side netting from a tight angle just 10-yards from goal.

Tonbridge Angels grabbed the lead with 33 minutes and 33 seconds on the clock and it came from a mistake from Beaney inside the Tonbridge half of the pitch.

Beaney’s attempted pass forward along the deck was intercepted by Craig Stone, who drove over the halfway line before slipping the ball into D’Sean Theobalds, who strode forward before sweeping the ball out to Turner on the left.

Turner’s low cross flashed across the near post and Merstham centre-half Cook stabbed the ball clear and an untracked McKenzie latched onto the loose ball to drill his right-footed shot past goalkeeper Amadou Tangara from 12-yards.

Beaney swung a free-kick into the Tonbridge Angels penalty area which was flicked behind by Miles and before Merstham could take the resulting corner from the left, Cook and Miles got in a tangle and Cook was seen shoving Miles, who retaliated by allegedly kicking out at his opponent.

Referee Mr Ryan brandished straight red-cards for Cook and Miles and both managers had to re-adjust their line-ups.

Stone slotted in beside Arthur Lee in the heart of the Tonbridge Angels back four, while Samuels slotted in as Merstham’s right-back while Ryan Cooper moved from right-back to left-centre-half.

Merstham’s football was a joy to watch and they kept possession for a lengthy time inside at the start of the second half and waited patiently to find their moment.

Holding midfielder Kavanagh played the ball into Figueira, who stroked a right-footed drive on the turn from 25-yards, which was comfortably saved by Henly, stepping to his left to deny Merstham an equaliser with 184 seconds on the clock.

Tonbridge Angels produced a slick three-man passing move along the deck and went agonisingly close to double their lead in the 66th minute.

Merstham lost possession inside the Tonbridge half and Theobalds broke down the right before releasing McKenzie speeding down the right channel. He sprayed a fine pass over to an unmarked Turner on the other side of the pitch but he dragged his first time left-footed angled flashing across the keeper and agonisingly past the foot of the far post from 16-yards.

Bird brought on a new left-back in the shape of Michael Abnett in the 57th minute but it appeared that he was struggling to provide the quality and the balls forward for Merstham’s diminutive forward line of Figuira, Samuels, Ghassimu Sow and the disappointing Saraiva.

Tonbridge Angels’ substitute Joe Healy swung in a left-footed free-kick from the right-channel which was cleared out to Adem Ramadan, but the unmarked winger hit a right-footed half-volley over the crossbar from a central position from 25-yards.

Merstham kept passing the ball on the deck and they remained patient to find the decisive final ball.

With Tonbridge Angels’ substitute striker Alex Read down with a knock on the edge of the Merstham penalty area, play continued and Merstham’s substitute left-winger Roman Michael-Percil cut in from the touchline and cut along the edge of the penalty area to tee up Cooper, who sliced his right-footed shot past the far post from 22-yards.

Samuels played a crossfield pass from right-to-left over to Michael-Percil, who cut in from the wing and space opened up in front of him and his right-footed drive from 25-yards was comfortably held by Henly, low to his right in the 38th minute of the half.

Tonbridge Angels’ left-back Parter slalomed his way past four Merstham players on a subline 30-yard run and cut into the Merstham penalty area but was denied a goal as Tangara rushed off his line to smother the shot.

Tonbridge Angels sealed their passage to their winner-takes-all showdown in Surrey, with Turner capping off an outstanding game by smashing in a penalty, just four seconds into stoppage time.

Samuels was booked for sending Theobalds to the deck and Turner stepped up and rifled his right-footed shot straight down the middle as the keeper dived to his right.

The Police hold home advantage because their points-per-game average (1.857) was higher than Tonbridge Angels (1.666).