BECKENHAM TOWN have been granted planning permission by Bromley Council to replace their existing floodlights.  Club secretary Peter Palmer is hopeful that the new lights will be in place at Eden Park Avenue for the early part of next season.  “The existing floodlights were installed 20 years ago and are now showing their age,” Mr Palmer told the club website.

CHATHAM TOWN have re-signed striker Ade Yusuff, 22, on contract.  He originally left the club to sign for then League Two side Dagenham & Redbridge for an undisclosed transfer fee in September 2014.  He made 19 appearances, scoring twice for the Daggers and was sent out on loan to non-league sides St Albans City, Leatherhead, East Thurrock United and Welling United last season.

ENGLAND Seniors were crowned World Cup winners after a 1-0 win over hosts Thailand last Saturday, which followed a 3-0 win over Scotland in the semi-finals.

The squad included former Gillingham players Ian Cox, Andy Hessenthaler and Nicky Southall, who are pictured with the trophy below (photo Twitter) 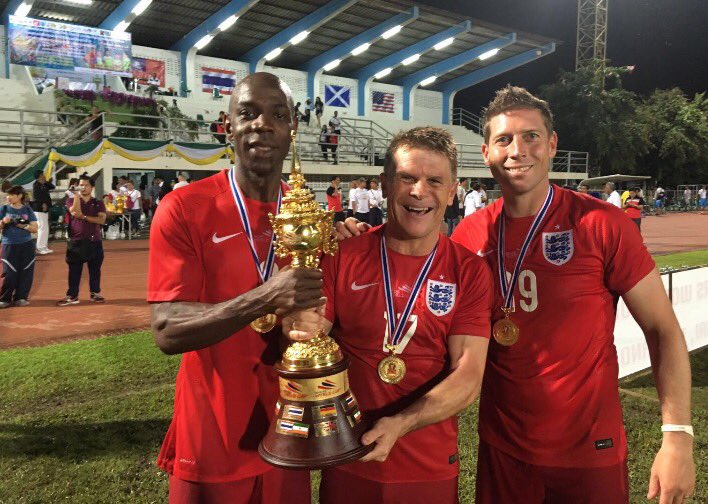 Southall, 44, was ruled out of the Final through a hamstring injury, but the now Maidstone United assistant manager said: “Amazing day for us, special feeling winning the World Seniors Cup in Thailand. It was a real team effort.”

EBBSFLEET UNITED manager Daryl McMahon has made former York City central defender and vice-captain Dave Winfield, 28, his first summer signing and the Vanarama National League South side have announced that winger Sam Shields, 24, has re-signed for the club.

ERITH & BELVEDERE begin the search for a goalkeeper coach to work for the Southern Counties East Football League Premier Division club on a voluntary basis.

ERITH TOWN begin the search for a reserve team manager to take charge of their Suburban League Southern Division side.

The candidate should have experience of coaching at this level, or step six upwards.  Anyone interested should email their details, including relevant experience to secretary@erithtown.co.uk.

GILLINGHAM have voted against the introduction of Premier League B Teams in the rebranded EFL Trophy next season.

It was announced that next season would pilot a new format for the EFL Trophy  as part of the League’s ongoing commitment to creating more and better home ground players.

The one season trial will include 64 teams made up of EFL League One and Two clubs, plus an additional 16 category 1 Premier League Academy/under 21 sides.

Central to the competition will be the introduction of a new group stage format with 16 regional groups of four teams.  The top two teams will progress to the knockout stages of the competition with the final staged at Wembley Stadium in April 2017.

The Gills issued the following statement today on www.gillinghamfootballclub.com:

“Gillingham Football Club voted against the introduction of Premier League B teams.

“Although Gillingham Football Club are yet to win the EFL Trophy, formerly known as the Johnstone’s Paint Trophy, that the competition offers teams the chance to play a cup final at Wembley Stadium means it’s one the majority of clubs take seriously.

“However, we do not believe the introduction of Premier League Academy and under 21 teams and development squads will incentivise more fans to attend matches, nor do we feel the trophy’s worth will be increased by these changes (even if it is currently only a one season trial).

“Removing any historical sponsorship deals, the competition is the Football League Trophy; by default, it should only be open to Football League clubs (or EFL, as it is now known).

HYTHE TOWN’S pre-season friendly against Folkestone Invicta on Saturday 6 August 2016 will be a testimonial for long-serving defender John Walker.

Walker joined the club from Invicta back in August 2006 and has gone on to make 354 appearances scoring three goals for the Reachfields Stadium outfit.

MAIDSTONE UNITED goalkeeper Lee Worgan has been named in the Vanarama National League South Team of the Season.

Managers from the 22 clubs were asked to pick an XI, not including their own, from the players they have seen during last season.

It's the second year running that the Stones keeper has received that accolade after Ryman Premier managers picked him out the previous season.

National League South champions Sutton United had five players in the Team of the Year.

Bull told www.margate-fc.co.uk: “Danny was in the process of building a really good career when he got his move from Histon to Luton but he was really unlucky with an injury.

“Danny has worked hard to get back to full fitness and is the type of player that we want now at Margate FC, young, hungry and passionate to do well.”

Margate have also announced that Football Community Officer Joe Rowland has signed a non-contract with the first team after impressing during a trial with the club last season.

Rowland, 19, plays in midfield and will form part of Margate’s squad ahead of the new season as well as securing further ties in the local community during the week.

“Scott Whibley will be signing Ryman forms with us but only if I need him and if Glebe don’t have a game, so yes he has signed but only in a case of emergencies.”

SEVENOAKS TOWN are looking for highly-motivated coaches where there are opportunities to coach the clubs junior and youth players and opportunities to manage in the Greatness Park outfit’s youth ranks.

“We are a FA Charter Community Club running well over 50 teams. We have recently introduced our Player Pathway which focuses on helping our players develop technically and personally both on and off the pitch.  You would be responsible for the development of each player you coach in order to help them achieve their full potential.”

To apply, please email your CV to Paul Landsdale at paul@stjfc.org.uk.

TONBRIDGE ANGELS have confirmed that a testimonial match for club stalwart Jon Heath will take place when former boss Tommy Warrilow brings his Thamesmead Town side to Longmead Stadium on 30 July.

“The ever popular and friendly defender was a one-club player who turned out for his home town club from the age of five,” said a Tonbridge Angels statement, posted on www.tonbridgeangelsonline.co.uk.

“With over 200 first team appearances he build a reputation for his reliability and complete loyalty.

“Unfortunately for Jon, he didn’t have much luck on the injury front and undoubtedly would have made many more appearances for his club.

“Please come along and show your appreciation for a player who will always be close to the hearts of the Angels supporters.”