NATIONAL LEAGUE clubs have voted to change the existing format of play-offs from four clubs to six, meaning that those clubs finishing second to seventh in each of the three Leagues will contest the end of season play-offs.

The matches will now be decided on a one leg basis as opposed to two legs, with advantage of being at home to those who finish higher in the table.

In basic terms this means the format will be as follows:

The two winners will then play in their respective Final on the terms of their designated League as current relations for those Promotion Finals.

Meanwhile, Jim Parmenter (Dover Athletic) and Oliver Ash (Maidstone United) are among eight chairmen to join the National League Board.

CROCKENHILL were the first Kent club to report back for pre-season training ahead of the 2017-18 football season when manager Christopher Sundborg’s side trained at Hall Place yesterday, looking to improve on their second-from-bottom finish in the Southern Counties East Football League First Division last time out.

Sundborg said: “A great turnout on Saturday but we are still on the lookout for players in all positions.  Really looking to push on this season.”

EBBSFLEET UNITED’S matchday programme has been voted the Vanarama National League South programme of the year for the second season running.

Announced at the National League’s AGM at Celtic Manor, Newport, on Saturday, the award is voted for by the other clubs in the division. Peter Danzey picked up the award on behalf of the club.

Fleet’s vice chairman Peter Varney told www.ebbsfleetunited.co.uk: “To win the Programme of the Year award for the second-year running is a fitting acknowledgement of the hard work and commitment of Ed Miller in producing such an informative, well-written and readable publication and even in weeks where we have to produce two programmes he never drops his high standards. Ed fully deserves this accolade.”

ENGLAND celebrated retaining the Seniors World Cup after beating Iran 2-0 in Thailand yesterday.  The Three Lions were captained by Andy Hessenthaler (who is seen below lifting up the silverware, photo Twitter).

Meanwhile, England's under 20’s won the World Cup after beating Venezuela 1-0, courtesy of a goal from Everton striker Dominic Calvert-Lewin and a second-half penalty save from Freddie Woodman. 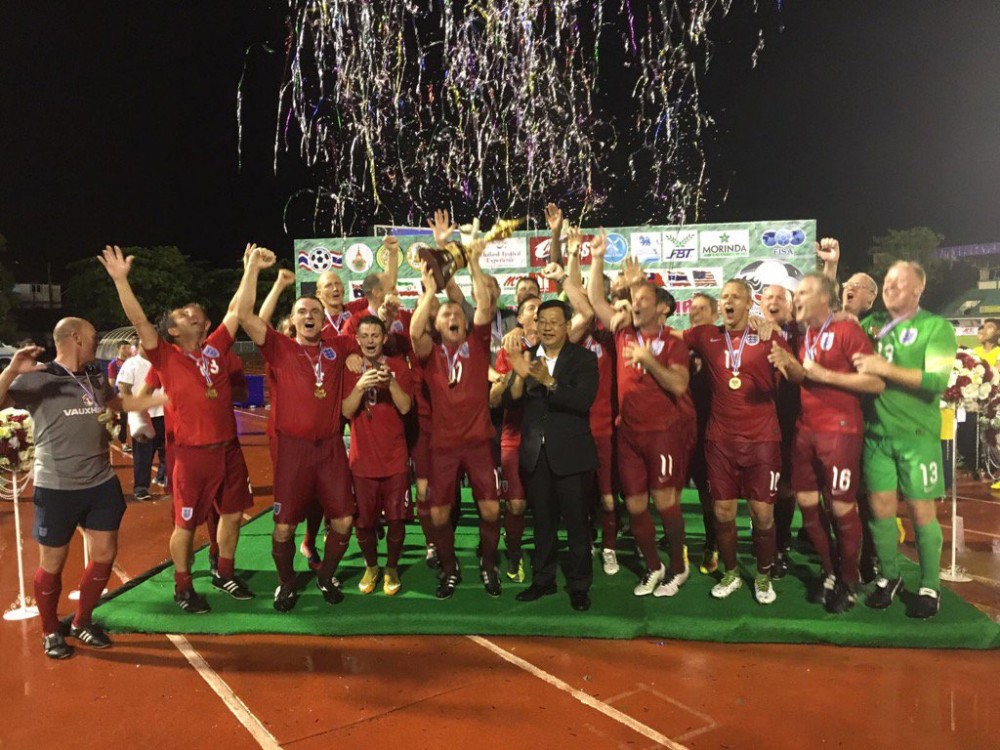 “With the recent ground development at K Sports we have some of the best playing facilities in the county and with the promise of future investment from the owners Marpaul Construction this is a very exciting time for the club,” said a club statement.

“We feel the board members selected all have a wealth of business and football experience which will be invaluable in growing the club.”

The statement from the Aylesford based outfit added: “Kris Browning and his team did an excellent job last season keeping us in contention for promotion for so long and we felt it was important for us to show Kris our support and help him be in contention again this season.”

Foley was diagnosed with a brain stem cell tumour in September 2012 and had six weeks of intensive radiotherapy, followed by two full courses of chemotherapy. Sadly, his condition has deteriorated to the point of severely limited mobility.

Central defender Foley played a massive role in both club’s and this game is an opportunity for fans of both sides to come along and support him, while catching up with some of the players from that time.

Admission is a minimum of £5 (adults), Children aged 11 and under are free. All proceeds will go to assist Foley with his care and equipment.

“I am really pleased to get Johan on board,” Saunders told www.maidstoneunited.co.uk.

“He’s someone I’ve liked since his Folkestone days and those three years at Hull will have improved his game even more.

“He has plenty of pace, is a good finisher and gives me different options to the frontmen we’ve already got.  It’s an exciting frontline with pace, power and hopefully plenty of goals.”

Ter Horst, who scored 26 goals for Folkestone Invicta to help Neil Cugley’s side reach the Ryman League Division One South play-offs in the 2013-14 season, added: “I see this move as a very good opportunity for me. Maidstone is a club definitely on the up and I hope that I can be a part of that, play a big part next season and score goals for the club.  I am really looking forward to it.”

Ter Horst is currently recovering from a shoulder operation and should be available for selection towards the end of August.

MARGATE have paid an undisclosed transfer fee to sign winger/striker Alex Flisher, 25, from National League side Maidstone United, where he made 275 first team appearances for the club since making his debut in 2009, having progressed through the Stones’ youth and reserve team ranks for his home-town club.

TONBRIDGE ANGELS are recruiting a head coach to run their under 18 youth side that will compete in the Kent Youth League.

The successful applicant will be asked to take forward the nucleus of last season’s under 16 side and at the same time liaise closely with their under 21 development team manager with a view to progress players through the youth ranks.

To apply, please email Sdtonbridgeangels@gmail.com before the 17:00 deadline on 15 June.