Snodland Town chairman Dave Jeal: The management committee have worked tirelessly over the past eight years to get us to where we are today, the progress made at the ground and as a club has been fantastic

SNODLAND TOWN are pleased and proud to announce that their own brand-new changing rooms are now open. 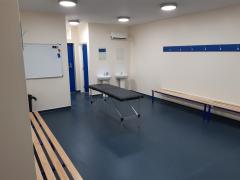 This is the completion of the first phase of a two-phase project for new clubhouse facilities at the club’s home, Potyns Sportsground. The second phase, which is already underway, is for a hospitality suite.

The changing room complex consists of a home and away team dressing room plus main and secondary officials’ dressing rooms.

Building work started back in July 2019 but was beset from the outset firstly by atrocious wet weather problems and then the Covid-19 pandemic. It is a testament to the endeavours of the project management team that they have managed to get phase one completed by this time with the problems that were encountered.

The facilities exceed the guidelines stated by the Football Association for changing room sizes and could arguably be classed as the best facilities in the Southern Counties Football League and possibly in higher leagues.

The whole project was the brainchild of club development director and former chairman, Mel Rayfield, who was also the driving force of amalgamating the several football clubs within Snodland into one club in 2012.

“With the undertaking of such an ambitious project and with the many problems that were out of our control along the way, it has been a steep learning curve for everyone involved in the construction of the building,” said Rayfield.

“However, we would not have been able to complete the project had it not been for the fantastic financial donations and support from so many people associated with the club, the great help of a grant from the FA Football Foundation and the support of the Snodland Partnership.”

Club chairman Dave Jeal added: “The management committee have worked tirelessly over the past eight years to get us to where we are today, the progress made at the ground and as a club has been fantastic.

“The new changing rooms are a result of all this hard work and I am very proud we have a facility that will be there for many years to come for our teams to use and enjoy.

“The changing rooms have been completed to a very high standard and anybody that has seen them has been very impressed.

“My thanks must go to our development director Mel Rayfield who has project managed the build from scratch, closely supported by Alan Totham in recent months.

“There have been many people involved from the committee, club members and local businesses who have supported us financially all of which has been greatly received.

“Our attention now turns to the clubhouse and raising further funds to get this completed. Once this is complete it will be open all weekend for our youth and adult teams to have toilets and refreshments while keeping warm! “

Snodland Town Football Club will have a great matchday facility which will include a meeting place, bar and refreshment facilities and also spectator toilets.