CHARLIE SHARMAN says he wants to get his career back on track.

The 25-year-old has decided to leave Kent Invicta League side Rusthall after his father Gary lost his job as first team manager at Jockey Farm. 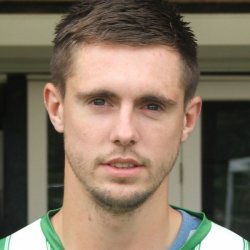 ON THE MOVE: Charlie Sharman has decided to leave Rusthall and says he wants to earn promotion with his new club next season.
Photo: Rusthall FC


The Orpington based attacking midfielder/striker is a carpenter by trade but after tearing his anterior cruciate ligament back in 2001, the player is looking to fulfil his potential.

“I went back to Tonbridge Angels reserves at the end of 2012 to finish the season.

“My dad got the Rusthall job in 2013 and he said come down and get games to get back my match fitness and go from there.

“I had an injury free season and was top scorer for the club that season and last season I enjoyed getting back into it after a few hard seasons before of not enjoying football.

“I had a great time at Croydon Athletic playing at Ryman South level and wished it had worked out better there but obviously what happened with the chairman, it didn’t go as planned.

“I feel I have overcome my injuries.  If I have a decent pre-season I feel I can push to a higher level and I want to prove myself again – after a few good years at Tonbridge and Croydon Athletic.

“I don’t mind staying in the Kent Invicta League but would really like to either help a club get promoted or even try it again at a higher level.”

JF16 is the name given to the project that will totally transform Jockey Farm and give the club facilities that will be the envy of many.

A club statement said: “Following Tunbridge Wells Borough Council granting planning permission for the club to erect floodlights at Jockey Farm the clubs management committee have been working hard to make this happen.

“They feel that this is the ideal time to also have the main pitch levelled and also have new drainage installed to prevent the waterlogging that has led to so many postponements in recent seasons.

“This is a huge project and to make it happen we will be looking for funding from various sources, for which we will have to find 30% of the total cost, which is expected to total around £130,000.

Chris Hollyoak is now Rusthall’s manager going into next season after Gary Sharman completed the campaign in the bottom four.

The club report back to pre-season training on Saturday 27 June at Jockey Farm at 10:00 and will train twice a week during pre-season.

The new Kent Invicta League campaign gets underway on Saturday 8 August and the club will train on Wednesday evenings at Hayesbrook School in Tonbridge during the season.