Seniors World Cup 2016: We would love to give the boys back home a lift by winning this event, says England star Nicky Southall

ENGLAND manager Roy Hodgson bids to end 50 years’ of hurt this month as The Three Lions bid to win the European Championships in France.

England kick-off their campaign with a Group B clash against Russia in Marseille on Saturday as Hodgson bids to replicate Alf Ramsey’s World Cup winning side of 1966. 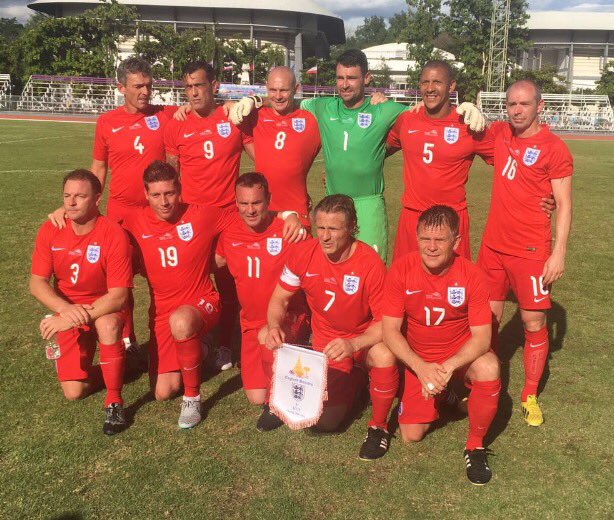 Kent based footballer Nicky Southall is also gunning for glory in Thailand as he joins his close friend Andy Hessenthaler (now the manager of League Two side Leyton Orient) to represent England in the 11th Seniors World Cup.

Midfield ace Southall is one of very few footballers that have played in every level of football from the Premier League (Bolton Wanderers) and the Ryman League Division One South when he was Whitstable Town’s player-manager.

He is now the assistant manager to Jay Saunders at Maidstone United, who will be playing National League football (the top flight of non-league football or the fifth tier of English football) next season after winning back-to-back promotions.

The Three Lions got their Seniors World Cup campaign off to a flying start by thrashing Taiwan 6-0, before Southall scored a trademark free-kick as England defeated USA 2-0 to progress through to the Semi-Finals with a game to spare.

England suffered a 2-1 defeat to holders Iran in their final group game but Southall is relishing the clash against Scotland on Friday (11:00 UK time) for a place in the Seniors World Cup Final against Iran or hosts Thailand.

The match is being screened live on You Tube on Friday morning and Southall reflected on his experience so far.

“This whole week has brought back the player in me and the boys,” said a proud Southall.

“As soon as you put the England strip on the adrenalin and will to win, whatever you want to call it, comes flooding back through your body.

“I’m seven thousand miles from home with a group of ex-pros trying to win this Seniors World Cup and it’s been tough for everyone playing four games in five days in near 40c heat, which is crazy, but it’s the way they run the tournament so you just have to get on with it but it’s like nothing I’ve ever played in! The Asian teams have the advantage in that department.

“We are one game away from the Final. Yes, the Euros 2016 are only a day or so away but we would love to try to give the boys back home a lift by winning this event.

“We have players here such as Peter Beagrie, Andy Hessenthaler, Gareth Ainsworth, myself, Jason Price, Dean Barrick, Barry Hayles, Ian Cox, Ged Brannon, Kenny Irons, Dan O’Shea, along with some non-league boys who are representing that side, who are very good indeed, so it’s a diverse group of players from all different playing backgrounds from all parts of England.

“We are now one huge game away from reaching the Final.  The only obstacle is the Scotland team who are out here like ourselves representing and playing well for their country.

“It’s going to be one hell of a game, miles from the shores of Britain in Chiang Mae, Thailand, a battle for a place in the Final of the Seniors World Cup 2016.”

Nicky Southall, the whole of England is with you!