For us the target from day one was always promotion, says Merstham manager Hayden Bird

The Surrey side finished in fourth-place in the Ryman League Division One South table with a club record haul of 93 points from their 46 league outings.

Burgess Hill (with only three league defeats) claimed the sole promotion spot finishing champions on an impressive 109 points and can look forward to playing Ryman Premier League football next season.

Former Bromley manager Bird takes his side to Faversham Town for a Play-Off Semi-Final clash at Salters Lane, looking to maintain the club’s impressive away form. 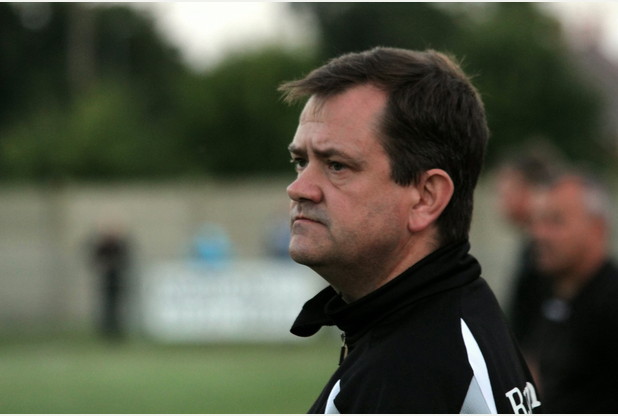 PROMOTION: Hayden Bird says Merstham's objective is to get promotion and they will have to beat Faversham Town on Tuesday night followed by either Folkestone Invicta or Whyteleafe at the weekend.
Photo: Merstham FC

“I think that the team have achieved their objectives,” said Bird.

“I think there has been four outstanding sides in the league, all of which have got 90 points and over and in different circumstances Merstham, Folkestone and Faversham would have perhaps been a lot closer to winning the league but Burgess Hill have been exceptional.  They have ripped up the rule books a little, haven’t they?

“For us the target was always from day one promotion and the Surrey Cup and here we are with ten days to go we’ve still got those objectives at the forefront of our mind so we’ve got to be pleased.

“I think if you average a ratio of two points per game you’ve done very well across the league season so to beat that is not only exceptional but if you don’t win things you give your opponents credit, who have done even better.

“I think Merstham have had a really good season and the team have done exceptionally well from start to finish.

“Whatever happens they’ve broken every single club record this season. How can you not say it’s not been a success when you’ve got 93 points and reached the Cup Final?”

Merstham really impressed when they travelled to Faversham for a league game back in December in a 1-1 draw.

Bird said: “I think it will be the same. I think that there’s two teams with very contrasting styles. We have our way of working, they have Ray (Turner) and Clive (Walker), their own way, which works for them.  Both very different.

The winners of Tuesday’s game will play either second-placed Folkestone Invicta or Whyteleafe in Saturday’s Final.

If Folkestone Invicta beat last season’s Southern Counties East Football League champions then the Final will be played at Cheriton Road because the highest placed side get home advantage.

“Whyteleafe have been the surprise package and fair play to John (Fowler) and Dean (Davenport) and everybody at Whyteleafe Football Club,” said Bird.

“I don’t think they expected to be in the position they are and it’s a credit to their football club that they’re sitting in the play-offs as well.

“That’s going to be a tall order going to Folkestone for them but you know they’ve beaten Burgess Hill twice and they’ve beaten Faversham so they’re the surprise package of the four with nothing to lose because like us they’ve achieved their objectives for the season but who knows?

“I think Folkestone are the favourites in the game but that doesn’t say the winners of our game will go to Folkestone. Football’s not that easy and it’s not that straightforward.”

When asked about the mood in the camp at Weldon Way, Bird replied: “Really good. Perfect. Players are fit and ready.

“If you look at the last eight games we’ve won seven and drawn one away so playing away from home in the play-offs doesn’t faze us.  I’ve done it before at Carshalton and Mick’s (Sullivan) done it at Leatherhead.

Meanwhile, Faversham Town have confirmed that normal ticket pricing will be in place for this game.

The game will be settled on the night with extra-time and penalties if needed.