PAUL McDONAGH says the popularity of Women’s Football in Kent is increasing.

McDonagh is a coach at two clubs that in the men’s game will be competing in the rebranded Vanarama National League South next season – Dartford and Maidstone United. 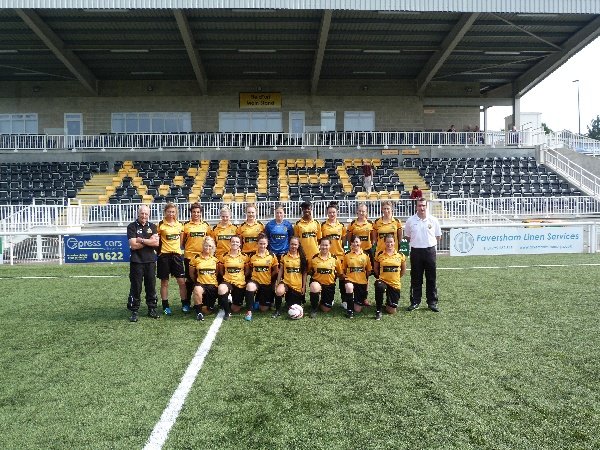 He coaches the Dartford’s Under 13 Girls’ side that finished runners-up in the Kent Girls and Ladies Football League Under 13 Division Two this afternoon.

“We drew 2-2, which meant that (our opponents) Anchorian Angels won the League by one point – but we beat them in the Cup,” said McDonagh.

“It was a good game, mostly enjoyable, good for the girls.

“We finished runners-up but we got promoted as well so it was a good, successful season for the girls. We won the Tina Marshall Cup, came second and got promoted to the next division.

“They’ve done well because it’s their first season as a team because we’ve just set-up a girls side of things at Dartford.  It’s very pleasing for them.”

McDonagh said that there is no conflict of interest coaching at both Kent clubs.

He said: “The under 13 girls is something myself and Phil Murray set-up a few years back. We got the ball rolling on that.

“My Sunday’s comprise of normally a girls’ game for Dartford under 13s and then I’ll shoot straight off to my afternoon game which will be Maidstone Ladies in the afternoon.

“There’s no real conflict of interest there at all because they’re not competing directly against each other because Dartford don’t have a Women’s team. It shouldn’t have any conflict and both clubs are happy with the situations.”

McDonagh took charge of Maidstone United’s Ladies side in February and led them to a fifth-placed finish in the London & South East Regional Women’s Premier Division.

There are 12 clubs in the division, which was won by Old Actionians and have clubs such as Carshalton Athletic, AFC Wimbledon and Eastbourne Town competing alongside the Stones.

“I basically joined in February. I took over as manager because the previous manager walked out for whatever reason,” said McDonagh.

“I know Peter Spragg, who oversees the Women’s and Girls’ section and he asked me if I could finish the season off.

“Due to my new work commitments I’m no longer available on a Saturday any more so it made sense for me to continue my love of the game so I joined up.”

Women’s Football in the county is rapidly increasing popularity with clubs such as Millwall, Charlton Athletic, Gillingham, Bromley, Maidstone United, Margate and Herne Bay all fielding Women’s sides at various levels of the pyramid structure.

And with the Women’s World Cup kicking off in Canada on Saturday, then McDonagh is confident Maidstone United will bear the fruit of new players flocking through the doors to play football for the club next season.

“Definitely, not just Kent, I would certainly say it’s taking off full stop all over the country,” he said.

“The FA is taking it more seriously and putting more money into it, which is great!

“It’s a great route for coaches. There’s more serious coaches getting into the game. You’ve got Julian Dicks at West Ham haven’t you?

“It’s taking off really well.  I think at Maidstone with the facilities and the club on the up generally, I think it’s a good opportunity for the Women’s team to progress up the leagues.

“I’m looking to basically come in and make the whole set up a little bit more professional, making sure the training is right and the fitness levels are good because they weren’t up to par when I joined.

“Basically, I’m looking to strengthen to put Maidstone on the Women’s football map.

“Now that Gillingham have been relegated there’s one division between us, so I think as a club they’re challenging for the biggest Women’s club in Kent with Gillingham.

“We play our matches on a Sunday at The Gallagher and train there as well. It’s great facilities for Women’s football, certainly in Kent anyway.”

When asked what his aspirations are for next season, McDonagh insisted: “Promotion! 100 per cent. We’re looking to challenge for that title and get promoted to where Gillingham are.

“We’ve got a good nucleus of 10-12 players that I’ve re-signed for next year that played last year and we’re looking for some new blood to fill the gaps, good quality and we can challenge for promotion.”

McDonagh, who is a UEFA A coach, and is scout for Tony Burman at Dartford, has previously been involved with men’s football at Thamesmead Town and Rusthall.

McDonagh said: “I know The FA have done a lot of work on girls’ football and they certainly encouraged Dartford to set up a girls’ side. I think there was access to funding routes to set that up.

“The World Cup should encourage more players with it being televised and I think England should do quite well.

“When I started at Maidstone in February it gave me responsibility to actually start to look at the Women’s game more. As you know I’ve been in the men’s game for a while now.  I’ve been to watch lots of different games as well, in the Super League, a few Gillingham and Charlton games just to get the measure of the level and the interest and I was quite surprised!

“I went to watch Liverpool play Chelsea in the Super League and there was 1,500 people there and there were TV cameras – it really surprised me how it’s taken off!

“I’m looking forward to get some new faces in the club and generally Women’s football is progressing nicely and be a good route for coaches as well, just not considered something secondary now.

“As you know, I’ve been involved with Dartford as a first team scout for a little while now, travelling the country to places like Grimsby, which was nice.

“My job situation changed so that put me in a situation that I couldn’t really continue in the men’s game on a Saturday. I had to earn a living, I’m afraid.  Unfortunately football doesn’t pay enough unless you’re at the top end of football.

“I started with a new job and I had to consider what I had to do – it left me with Sunday’s available.

“Having seen all the hype about Women’s football I approached Peter Spragg and said if he needed any help – this was just before the season started – and in February he got back to me.

“I’m looking forward to pushing on with the Women’s game and doing the best I can and the results last year when we got seven wins in a row, if we can start the season in that sort of form, we’ve got a real chance to win promotion.

“My ambition for Maidstone really, with their facilities, is the short-term aim is to get promoted into the Women’s Premier League and then from there, who knows? Super League – that is definatley what I’d like.

“Short-term, get them promoted, long-term, go as high as possible.

“The club are fully behind it.  The chairman knows what we’re trying to do.  Hopefully good times for Maidstone generally, men and women.”

McDonagh is looking for fully committed players who will be available to train two evenings per week.