Equality in football: Lewes to pay their women footballers the same as men

LEWES have become the first professional or semi-professional club to pay its women’s team the same as it’s men’s team, as part of its Equality FC campaign.

The announcement comes as part of the launch of the club’s campaign, Equality FC, to raise awareness about gender inequality in football.  The campaign also aims to encourage more support for women’s and girls’ football across the UK and across the world. 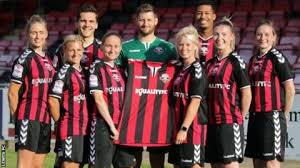 The first tranche of funding for the campaign has been approved by the board of the Bostik South club and has established pay parity between the two teams.

The club will continue to raise funds to achieve these aims through donors and sponsors, as well as by encouraging more people to become owners of the club.

Director Jacquie Agnew told www.lewesfc.com: “At Lewes FC we believe that there should be a level playing field for women in football.  By committing to paying our women’s and men’s teams equally and providing equal resource for coaching, training and facilities, we hope to spark a change across the UK that will help put an end to the excuses for why such a deep pay disparity has persisted in our sport.

“Together with our owners, donors and sponsors, Lewes FC can show that equal pay can be implemented to the benefit of both women and men in sport and beyond.”

John Donoghue, who manages Lewes’ women’s side, said: “I am proud that Lewes FC has stepped up to launch the Equality FC campaign.

“Every day I see the passion and commitment our players have for the game and I am sure this is mirrored across the country in women’s football.

“For female players to have the same rewards as their male counterparts for doing the same job is a fantastic leap forward for women’s football.

“This sends a powerful signal to not only our players and our club, but to the whole UK football community that women’s football deserves an equal voice and support to men’s.”

Darren Freeman, who manages the men at The Dripping Pan, added: “We use the same pitch, the same facilities, the same ball. As football fans we all want out team to win regardless of gender.  Parity means giving everyone the same opportunity and getting the same rewards.”