I’m currently sat at home, itching to work. I’m sure I can help someone in some way, says coach Hugo Langton

TALENTED and hardworking coach Hugo Langton says he is ready to win more medals at his next club. 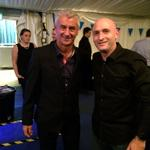 
The club fought tooth and nail with Eastleigh for the Conference South title in Langton’s first season at Hayes Lane, the Ravens having to settle for their highest placed finish of third in 2014.

The Kent club finished on 80 points from their 42 league games, finishing a gut-wrenching six points behind champions Eastleigh and one point behind bitter rivals Sutton United.

But The Ravens claimed their first league title in 54 years a year later winning the Conference South title on 77 points from 40 games, claiming the title with a game spare, a comfortable 3-0 win over Weston-super-Mare at Hayes Lane on 18 April 2015.

Bromley decided to switch to full-time training in the mornings three times a week so they can come to grips with life in the Vanarama National League and go into next Saturday’s FA Cup Fourth Qualifying Round tie at home to Eastleigh sitting in sixth-place in the table.

Langton resigned from his full-time job at Thamesmead Town’s Academy in June to continue his coaching role at Hayes Lane, but the club dispensed of his services a couple of days before the opening league game of the season, a memorable 3-1 home win over Wrexham.

“I had a fantastic two years at Bromley, I’m so proud of what we achieved,” said Langton, 41, a UEFA A licenced coach.

“The scenes at the final whistle the day we won the league will live with me forever. My children still talk about it now, a fantastic climax to two season’s hard work.

“I’ve had an enforced break.  I’ve spent time with my family and now I’m ready to work.

“I’ve been to games at all levels. I’ve been spending time with other coaches and managers and looking at their way of working.

“It’s important you use your time wisely when you’re out of the game, it’s a great opportunity to better yourself ready for the next job.

“I’ve been also expanding my opposition scouting network around the country, which is part of what my football services company does.

“I’ve affiliated my company to the Kent FA and I’m looking at starting up sessions perhaps in the daytime for players without clubs and with the affiliation I’ve scope to arrange games to get players match fit for when their chance comes around again.

“My phone has rung. I think many people who are perhaps interested in me think I was on big money at Bromley, which wasn’t the case.  I’m not motivated by money. I’m motivated by doing my best to win more medals.  Football isn’t a hobby for me, along with my family, it’s my life.

“I’m currently sat at home, itching to work. I’m sure I can help someone in some way.

“There’s teams out there struggling, I can help them.  I’m not arrogant, far from it, but I believe in myself and I know my work ethic and attention to detail can help a manager or a club.

“I like to think I have good experience now. I’ve worked out I’ve got around 400 games behind me. I’m looking forward to the next 400 plus.”