I believe that Harry Smith's got a real chance of making it at Millwall, says Folkestone Invicta boss Neil Cugley

MILLWALL have completed the signing of Folkestone Invicta striker Harry Smith for an undisclosed fee.

Smith (pictured) has been on trial with the League One club since the middle of July and impressed Neil Harris enough in pre-season friendlies against Dulwich Hamlet, Dover Athletic and Greenwich Borough to sign for the Lions. 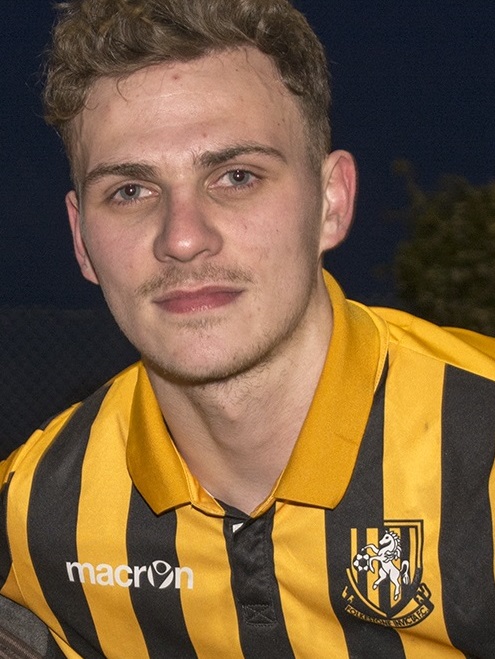 Harris, who has signed the six foot five tall striker on a two-year deal, told www.millwallfc.co.uk: “We are delighted to get Harry on board. He was flagged up by our recruitment department and has done well since he came to us during pre-season.

“Harry has the attributes to be a very good footballer but there is still a lot that he has to improve on as a player.  Physically he is a good size but his technical abilities are clear for all to see as well, so the potential is there.

“But potential is only one thing in football and it takes time to fulfil it.  He will have to work hard with us and at the same time we will have to be patient with him as he looks for chances to get into our first team.”

“The initial payment is somewhat less than we had hoped for, but with the add-ons this looks every bit as good an overall deal as Johan Ter Horst’s transfer to Hull City a couple of years’ ago,” Cugley told www.folkestoneinvictafc.co.uk.

“Sittingbourne insisted on a clause regarding any sell-on when we signed him last December and they get 15 per cent of the fee, but I believe that Harry’s got a real chance of making it at Millwall.”

The deal with the Lions also includes a sell-on clause and bonuses for appearances.

“If he works hard at it, I really believe that this could be the making of him,” added Cugley, who has been in charge of Folkestone Invicta for 1,001 games.

“And who wouldn’t jump at the chance of becoming a full-time footballer?

“For a lad of six foot six his aerial presence is not all it could be, but I’m sure that they will work on that.

“His finishing and his touch are both excellent as we well know and quite naturally we wish him the very best of luck for the future.  If he puts his mind to it I can see no reason why he won’t go a long way in the game.

“We’ve always said that we wouldn’t stand in the way of any good young player if this kind of opportunity came along.

“That was also the case when Johan went to Hull, of course. He’s been involved in their first team pre-season games and I saw some pictures of their recent trip to Austria which made me very envious! The facilities look superb over there.”

Part of Smith’s deal will see a full-strength Millwall says visiting Folkestone Invicta next pre-season, which should please Invicta chairman Paul Morgan, who is also an avid Millwall supporter.