We’re currently going through a tough period with a few bad results and performances hasn’t been up to standards expected, says Greenwich Borough boss Gary Alexander

GREENWICH BOROUGH boss Gary Alexander calls upon his side to increase their standards to keep their promotion bid alive in the New Year.

Last season’s Southern Counties East Football League champions are in the top four in the Ryman League Division One South table at Christmas with a playing record of 47 points from 25 games. 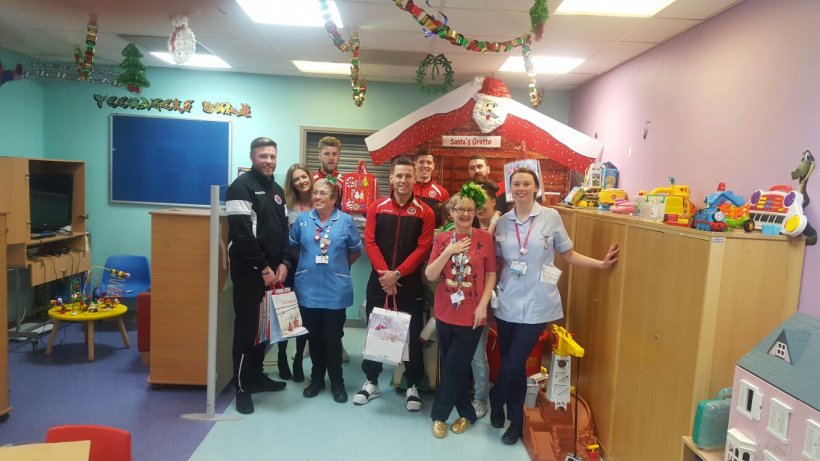 LIONHEARTED: Greenwich Borough manager Gary Alexander (left) and members of his playing staff distribute Christmas presents to children and staff at Queen Elizabeth Hospital, Woolwich.  The club donated books and CDs after raising £618 at their games over the past couple of months to bring Christmas cheer to kids staying in The Tiger and Safari Ward at the hospital.
Photo: Greenwich Borough FC

The Borough are seven points adrift of league leaders Dorking Wanderers and are battling it out with Tooting & Mitcham United, Corinthian-Casuals and Carshalton Athletic to consolidate their play-off place, although sixth-placed Hythe Town have closed the gap to a couple of points on Alexander’s men.

“We’re currently going through a tough period with a few bad results and performances hasn’t been up to standards expected - and the boys know that so I’m expecting a reaction over the Christmas period.

“We’re still in touch which is the main thing. As we’ve seen everyone beats everyone in this league so consistency is the key and hoping that can be us who put another run together but everyone are fighting for different things and it all looks good for an interesting run in.

“Our standards need to be better to make sure we keep the pressure up on the teams above.”