The owner of the Chislehurst-based club has decided to part company with manager Simon Copley and his assistant manager Ian Varley despite there being three games left of the season to play.

Bearsted claimed the league title following their 2-0 win at FC Elmstead last weekend and Sheppey United are four points behind on 84 points, Sutton Athletic in third on 79 points with two games left while Glebe are fourth on 79 points.

Next Tuesday, the club travel to Enfield to play Tooting Bec in the London Senior Trophy, before playing Sutton Athletic in the Kent Invicta League Challenge Trophy Final at Sheppey United on 7 May.

“Following a meeting yesterday morning, it was mutually agreed that Simon Copley and Ian Varley will leave Glebe FC after the Invicta League Cup Final on 7th May,” said Mr McMillan in a statement.

“Peter Dale will continue his role at the club as head goalkeeping coach and first team fixture’s secretary.

“I would like to take this opportunity on behalf of the club’s management to thank Simon and Ian for their hard work during their time with us and wish them every success in the future.”

Glebe were joint-favourites with Sheppey United to fight it out for the league title but have come up short.

Copley took to Twitter to say he accepts the decision.

“My boys have been a dream to work with and we all aim to leave on a high,” said the Arsenal Academy coach. 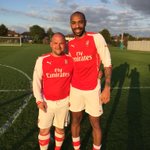 Simon Copley, pictured with Thierry Henry, has been told he will not be in charge of Kent Invicta League club Glebe next season after failing to get the Chislhurst-based club promoted.
Photo: Twitter

“No hard feelings and wish them well for next season. Two managers and a heck of a squad for sale.

“Final bit of business is two cups and we can walk away with heads held high.”