The Deres are struggling for form and are heavily involved in the relegation dog-fight in the Southern Counties East Football League Premier Division, having lost their last five games and suffered a 6-0 humiliation away to Deal Town last weekend in Wilfort's last game in charge. 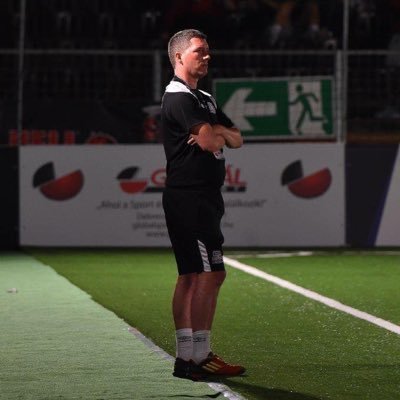 FIRST JOB: Coach Jamie Leggett takes charge of a club for the first time on Saturday after being appointed Erith & Belvedere's manager for Saturday's home game against Corinthian.
Photo: Twitter

Erith & Belvedere host tenth-placed Corinthian on Saturday in the bottom three having won five and drawn five of their 27 games and the new manager has 11 games to save the club from the drop.

They are only a point clear Beckenham Town and two above Fisher, who currently occupy the relegation zone.

Wilfort posted on his Twitter account: “Thanks Erith & Belvedere for accepting my resignation and thanks for the opportunity I have had there.  I wish you all the best for the future.”

“We can confirm that both John Wilfort and Paul Springett have resigned with immediate effect.  Thank you both for your service to the club.

“We will be releasing a statement with more details shortly.”

The Park View Road outfit did issue a statement on their club website later on.

“We would like to thank John and Paul for all their efforts and we wish them both the best on their future endeavours.

“We can confirm that Deres coach Jamie Leggett will take the reins for the Deres League fixture on Saturday against Corinthian.

The club has not confirmed how long Leggett will be in charge for or whether they are looking for someone else to take charge for the remainder of the season.