East Thurrock United 3-1 Dulwich Hamlet - So many people had their high hopes for this game and we didn't turn up, admits Dulwich Hamlet boss Gavin Rose

A record crowd of 1,661 crammed into Rookery Hill in Corringham to witness East Thurrock United win promotion into the National League South for the first time in the club’s 47-year-history.

John Coventry’s side played a direct style of football and on a windy day in Essex and on a bobbly pitch and they scored three goals from corners inside the opening 35 minutes to stun much-fancied Dulwich Hamlet.

George Craddock opened the scoring with only his second goal of the season as his in-swinging corner bounced past goalkeeper Preston Edwards, who was playing his last game while on loan from Ebbsfleet United.

Rickie Hayles then headed in two goals from another two corners – the central defender has saved all of his goals for the play-off games - to give Dulwich Hamlet a mountain to climb.

Ashley Carew’s penalty was brilliantly saved but winger Jordan Hibbert hooked in the rebound but the damage had already been done as all four goals were scored during the first half.

“Talking about the game, obviously disappointment, the manner that we lost the three goals were poor, were soft,” Rose admitted afterwards.

“So many people had their high hopes for this game and we didn’t turn up and you’re (beaten by) three similar, by the same similar goals, just defending a set-piece.

“With 35 minutes you’re 3-0 down in a Play-Off Final.  It literally takes your life away really to be honest with you.  Disappointed. It is what it is. It’s gone now, what more can we do?”

Dulwich Hamlet started the game in a positive manner but Joe Ellul and Hayles had the Rocks’ resilient back-four well marshalled.

His second rocket launcher was met by Ellul’s towering header and Edwards caught the ball on his by-line, only for a goal-kick to be awarded.

Edwards was at fault for gifting East Thurrock the lead as he used his chest to direct Craddock’s in-swinging free-kick behind for a corner, when he should have either caught the ball or allowed it to bounce behind for a goal-kick.

East Thurrock United were celebrating taking the lead with their second corner of the game, timed at 10 minutes and 24 seconds.

Dulwich Hamlet put Hibbert on the near post and their right-back Mitchell Nelson allowed Sam Higgins to start his run from behind him, cut across him and tried to flick his right-foot at the ball at the near post.

The 45-goal striker failed to get a touch as the ball bounced across Edwards at his near post and nestled into the far corner of the net.

East Thurrock United doubled their lead with their next attempt on goal, timed at 18 minutes and 30 seconds.

This time central midfielder Ben Wood swung in a corner from the left and Hayles showed more desire than Matt Drage to glance his towering header into the far corner from five-yards.

Rose added: “Yes, we obviously knew what their threats would be. Hayles’ would’ve been one of them as well.  For him to nod a ball in sort of five or six yards away from goal is ridiculous really for a team who are trying to win a play-off final to be honest with you.”

When asked how he was feeling after being hit by East Thurrock United’s sucker punches, Rose replied: “I’m quite disappointed in our approach, in our mentality to actually stand up and fight.”

East Thurrock United’s left-back Sammy Knott was stretchered off the pitch, the second player to have his game cut short after striker Kye Ruel suffered a broken leg during the Tonbridge Angels game on Thursday night.

East Thurrock United were celebrating promotion as early as the 35th minute when they scored their third goal.

Wood swung in their fifth corner with his right-foot from the left and this time Hayles showed more desire than Nelson to get to the ball first to plant his header into the top right-hand corner from six-yards.

Rose said: “Mitchell put his hand up. He said he lost the flight of the ball. It happens, it hasn’t happened much this season but it happens.”

Dulwich Hamlet accepted a lifeline when they pulled a goal back with 36:32 on the clock.

Striker Roman Michael-Percil was fouled in the box by Sammons and referee Alan Dale pointed to the spot.

Nineteen-goal central midfielder Carew stepped up and his right-footed penalty was brilliantly saved by Lukas Lidakevicius, who dived full length to his left to make the save.

The home fans were celebrating the save but Hibbert silenced those cheers by hooking his right-footed shot in off the underside of the crossbar to score his second goal of the season.

When asked about the lifeline being taken, Rose quickly lambasted his side’s lack of attacking threat, which is very unlike Dulwich Hamlet.

He said: “That’s a lifeline. I thought we’re very wasteful with the ball up front today. We didn’t look after it. We didn’t cross the ball at the right time. We didn’t shoot when we had the opportunity to have a shot.

“Basically at the end of the day you don’t cross you don’t ask any questions. I just thought we turned down every question that we could’ve asked and we turned it down which is disappointing.”

Rose added: “Even back to our goal, if it was a penalty then the guy was the last man so I’ll question as to why he wasn’t even yellow carded or red carded!”

A big kick down the pitch by Lidakevicious was headed clear by Nelson and Wood cracked his dipping volley narrowly over the Dulwich Hamlet crossbar from 30-yards – a rare first half chance from open play.

Dulwich Hamlet just failed miserably to get to grips with the conditions and the occasion and their chance at the end of the first half summed up their poor day.

Carew swung in their third corner from the right, the ball was flicked on by Ethan Pinnock and Matt Drage belted his volley from inside the penalty area high up into the air and over the corner flag.

When asked his thoughts at the interval, Rose replied: “We didn’t want to harp on the disappointment of the first half, so we spoke about it briefly and went on about what we could do to be more positive.

“I thought we all knew the pitch wasn’t going to be a great playing pitch and even what we wanted to do we found it hard to do because of how the pitch played but at the end of the day they played well. We give them credit for how they attacked their corners so credit to them.”

East Thurrock United’s first chance of the second half was another free-kick from Craddock from the right, which was grabbed by Edwards after 102 seconds.

Now with the wind in their favour, Dulwich Hamlet created a great chance to pull a goal back in the 65th minute.

Carew floated in their sixth corner form the right towards the near post but Drage planted his free-header towards goal, which was tipped over the bar by the goalkeeper’s outstretched hand.

Rose added: “Sort of a reminiscent of our chances. We huffed and puffed, nothing really clear so yes it was a half chance really.”

Dulwich Hamlet had penalty appeals turned down from the resulting corner.

Carew’s corner from the right was met by Pinnock’s downward header at the far post and it appeared that Craddock had used his left arm to control the ball as he hooked the ball away towards safety.

“I thought it was possibly a handball,” said Rose, who added: “We’re splitting hairs here at the end of the day.  The best team won because they defended their box better than we did and they attacked the ball better than we did in our box.”

Craddock’s deliveries from corners were a major threat and Pinnock headed the ball away.  Wood played the ball back into the Dulwich box for Higgins to stroke his shot on the turn straight at Edwards from the left-hand side of the penalty area.

Dulwich Hamlet, who failed to show their normal attacking flair and relied heavily on Carew’s corners, should have pulled a second goal back following their tenth and final corner.

Carew floated the ball in from the right and Lidakevicius stretched to palm the ball away. Jack Dixon clipped the ball back into the penalty area from the corner of the box towards the far post but substitute striker Ryan Ross planted his header over the bar from six-yards.

Poor control by East Thurrock substitute striker Harry Honesty received a lucky break as the ball landed at Higgins’ feet and his right-footed drive flashed harmlessly past the left-hand post from 25-yards.

Dulwich Hamlet created a chance towards the end of the game when Damian Scannell’s cross from the right was met by Moss’s downward header which bounced past the far post.

While East Thurrock United celebrated their greatest ever day, Dulwich Hamlet suffered play-off despair at the end of Rose’s seventh season in charge.

Rose admitted his side should have claimed the league title and will be going all out to win the Ryman Premier League title next season.

He said: “Listen, it’s not anyone else’s celebrations that gives me desire to be honest with you, they’ve got every right to celebrate. They’re in front of their home support and they’ve just won a game to take them up to the National League South, why shouldn’t they celebrate? Hats off to them.

“That doesn’t give me extra desire to be honest with you. I’ve got my own desire and that sort of drives me on to continue to try to achieve.”

Dulwich Hamlet have had the largest support in the Ryman Premier League this season and their vocal support and number of support here today was immense.

The club seem ready to play National League South football for the first time but the players simply couldn’t cope with East Thurrock United’s desire to get past Tonbridge Angels and Dulwich Hamlet.

“On a whole we’ve not done well enough this season,” admitted Rose.

“I thought we’ve had a squad good enough to compete for the actual title and we’ve underperformed doing that so there’s a lot of disappointment on my side and the management team’s side, I’m pretty sure on the players side as well in terms of how we’ve performed.

“If I’m still at the club in the summer going forward then that’s what we’ll be looking forward to. 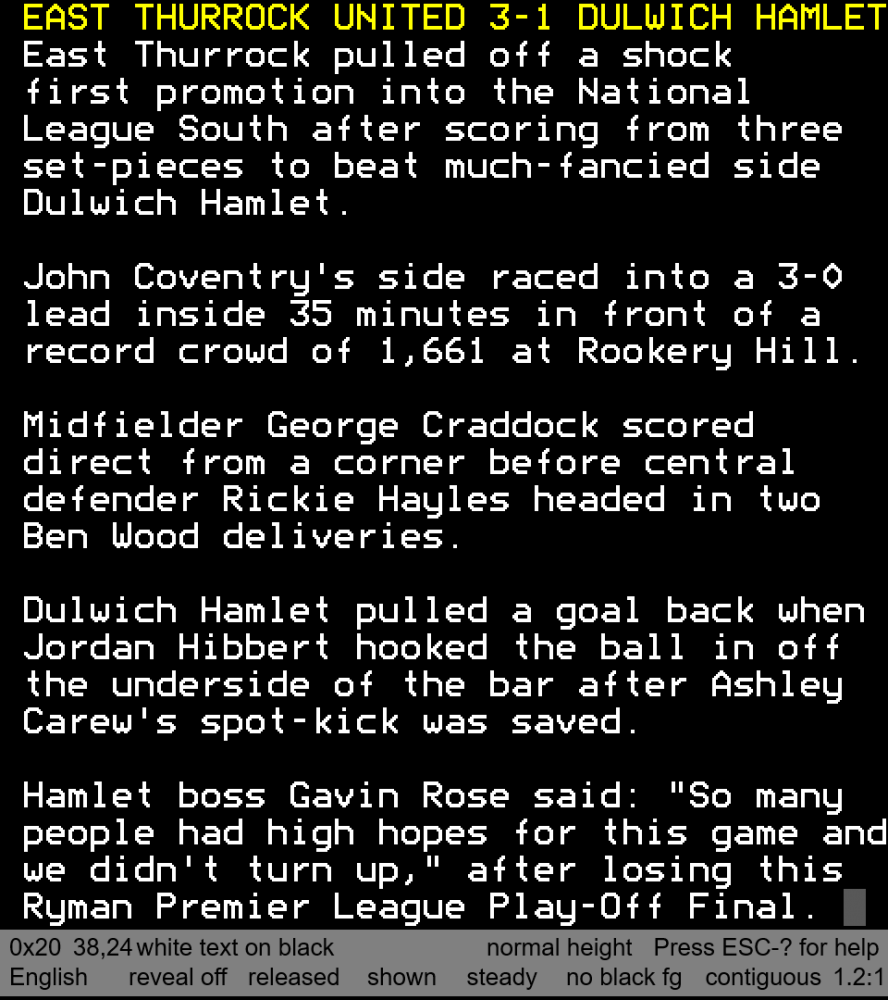