I'm over the moon to be called up to the Gibraltar national team, says Dartford goalkeeper Deren Ibrahim

DARTFORD goalkeeper Deren Ibrahim says he’s feeling over the moon to be called up by Gibraltar for their World Cup Qualifiers against Estonia and Belgium in October.

The 25-year-old, Sidcup born, Welling resident, plays his football in the Vanrama National League South – the sixth level of English football - and is one of four goalkeeper’s that have been called up battling it out for the goalkeeper’s jersey. 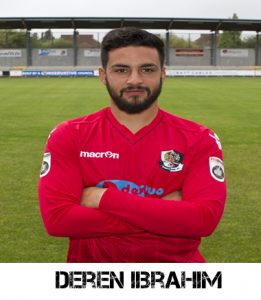 “I’m over the moon to be called up to the national team, however, I’ve got two important games before I meet up with the squad, so I’m fully focused on them,” said Ibrahim (pictured above, photo courtesy of Dartford FC).

“I’m expecting high intensity levels from the training sessions and everyone will be trying to impress the manager to hopefully get a start in the World Cup qualifying games.”

Ibrahim was quick to thank Dartford manager Tony Burman and all the coaching staff at Princes Park.

Ibrahim made his Dartford debut in September 2008 and has also had loan spells at Maidstone United, Margate and Leatherhead. He is a coach at Dartford’s Academy.

He said: “Of course, Tony has played a massive part in my development along with my goalkeeper coaches along the way.”

Dartford are in tenth-place in the table, having won four, drawn five and lost two of their games and they host bottom-of-the-table Concord Rangers to Princes Park tomorrow.

The Canvey Island based club are managed by former Dartford defender Adam Flanagan, who has seen his side win one and drawn three of their 11 league games.

Thamesmead Town boss Tommy Warrilow revealed after his side’s 4-2 after extra time win over Hanwell Town in The FA Cup Second Qualifying Round Replay on Tuesday night that winger Cristian Nanetti had played his last game for him as he has accepted a deal from Concord Rangers.

“The season has started to pick up and we’re starting to pick some wins together now, which is great and hopefully we can keep building the momentum,” added Ibrahim,

“The season so far has been good to me. I’ve kept to high standards so hopefully If I keep doing that, would be great.

“I just want to play as many games as I can and help Dartford climb up the league.”

A club statement added: “Tony Burman and everyone at the club are very pleased to see Deren given the opportunity and we all wish him well and good luck.”