The Vanarama National League club reported back for pre-season training at Hayes Lane this morning and Smith unveiled the signing of former Cray Wanderers and Welling United winger/striker George Porter, 23. 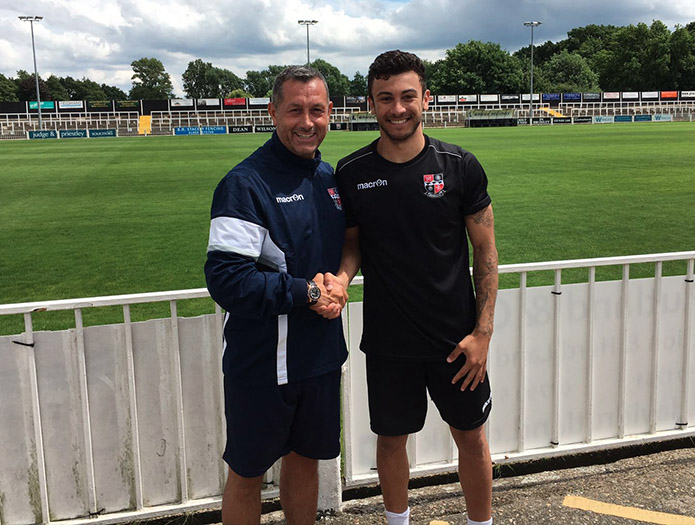 Porter began his career at Cray Wanderers in 2009, scoring seven goals in 35 games and following a number of impressive displays attracted interest from several Football League clubs before signing for Leyton Orient in 2010.

Porter played against Bromley in The FA Cup First Round tie at Leyton Orient in 2011, where he scored his debut goal for Orient, while being on the end of stick from the vast travelling support at Brisbane Road.

Porter then signed for Burnley in 2012 and following his release two years later he had spells at Rochdale and Dagenham & Redbridge, before signing for Welling United and suffered relegation after finishing bottom for the Wings last season where he scored only three goals in all competitions.

Porter was one of four players to be retained by Welling manager Mark Goldberg at the end of last season but full-back Barney Williams left to sign for National League side Braintree Town on a free-transfer, before Smith unveiled Porter as his second summer signing after former Ebbsfleet United right-back Joe Howe’s arrival.

Smith told www.bromleyfc.net/tv: “George is a young versatile player who can play as a winger or striker.

“He has had a taste of League football and wants to get back there. I am delighted he has joined our club.”

Porter added: “Great to be here. I’ve met the staff and players at training today. It’s a great set-up and the club is clearly going places in a big way, the training ground is superb and I cannot wait to get started.

Ajakaiye has scored 24 goals since joining the Academy and scored five goals in the recent tour of Belgium.

“Ajakaiye is known for his incredible pace, eye for goal and fantastic attitude. His efforts were rewarded last season when he made his first team debut at Guiseley coming on as a substitute in the 79th minute.

“Following a pre-season with Bromley, Daniel will join Grays Athletic on a dual-registration basis in order to continue his development,” added the club statement.

Bromley have 18 players on their books ahead of their second National League campaign and Moses Emmanuel, who scored 37 goals for the club during his two seasons at the club, has departed.

The Ravens kick-off their pre-season campaign with a trip to Ryman Premier League side Dulwich Hamlet on Saturday, 9 July (12:00).