It is everything for the fans and people who have been associated with the club for a very long time - days like this is what people dream about in football, says Bromley hero Chris Bush

“Raymond with the cross, Jaakkola can’t gather, is this the equaliser? IT IS! Bromley have scored, Chris Bush has turned it in! Delirium for their fans behind the goal and you have to say they deserve it! It’s Bristol Rovers 1 Bromley 1.”

Those were the words from BBC Radio Bristol when centre-half Chris Bush scored Bromley’s most memorable FA Cup goal in 74 years, at the Memorial Ground in Bristol on Sunday 10 November 2019. 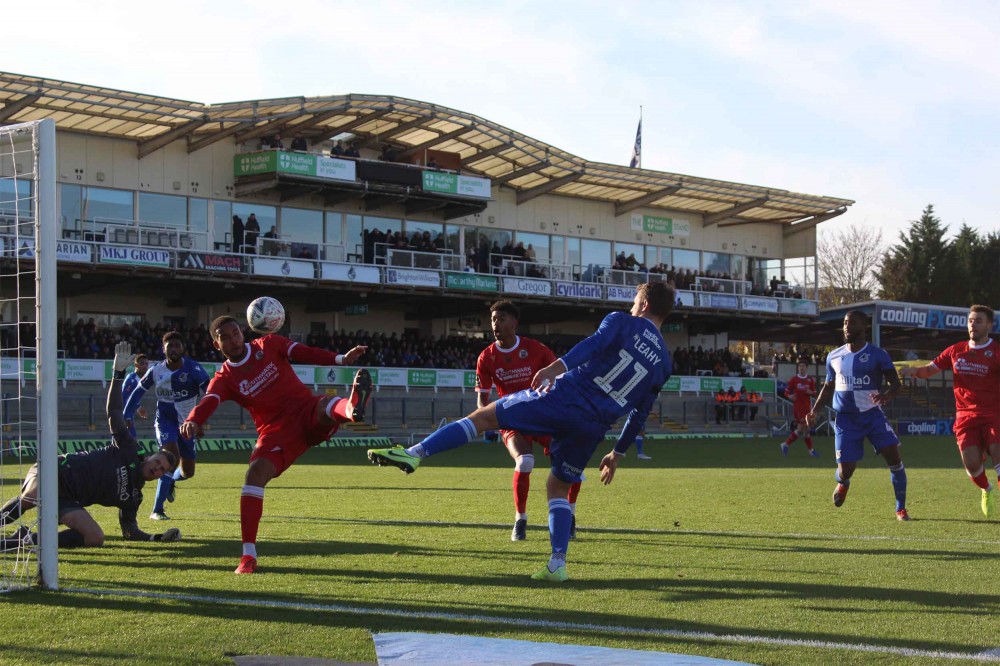 Chris Bush hooks in THAT goal at Bristol Rovers to bring them back to Hayes Lane for Tuesday night's ALL-TICKET BT Sport FA Cup First Round Replay.
Photo: Ryan Tanner

League One Bristol Rovers grabbed an undeserved lead through Luke Leahy’s tap-in in the 77th minute after Bromley keeper Ryan Huddart had parried Liam Sercombe’s angled drive, which was the home side’s only two shots on target during the entire game.

Bush’s hooked goal – just seven minutes from time – will go down as Bromley’s most watched goal online in their entire history as Neil Smith’s men earnt a lucrative televised replay at Hayes Lane on Tuesday night.

The National League club have made the game ALL-TICKET with at least 2,500 tickets already sold and the game is being screened live on BT Sport with five thousand fans dreaming of FA Cup glory.

Reflecting on that memorable day in Bristol, Bush told www.bromleyfc.tv: “I thought we went into the game with the right mentality. We approached it the right way as we always do every game and we gave a good account of ourselves and I’m glad we came away with at least a draw because I felt like we deserved it.”

Smith lost substitute Adrian Clifton to a knee injury and the former Maidenhead United striker will be out for a long time as Bromley finished the game with 10 men having made all three substitutions, having already lost Luke Coulson and Rarmani Edmonds-Green to injuries.

Bush, who has been consistent at centre-half all season alongside Marc-Anthony Okoye or Jack Holland this season, said: “We were unfortunate with the injuries that we got going down to 10 men for the best part of half-hour but credit to all the boys.

“It was a good day out and I’m glad all the supporters were there to enjoy it.

“Even during playing the game, I felt we looked comfortable and we didn’t really look under pressure or under the cosh really.

“I felt we held our own against a good team who are doing well in their league and we gave a good account of ourselves and also for the League as well.”

Bromley took 521 fans to Bristol for a Sunday 12:45pm kick-off and they felt heartbroken as soon as Graham Coughlan’s men grabbed an undeserved lead.

“It was very unfortunate going 1- 0 down, I didn’t feel like we should,” added Bush.

“They were a bit fortunate to get the rebound and score but credit to all the boys, we know what we’re capable of with all the throws and the set-pieces and the free-kicks and we managed to take advantage of one of them.”

Bromley’s holding midfielder Frankie Raymond’s deliveries are David Beckham-Esque and his right-hand side corner had Bristol Rovers’ goalkeeper Anssi Jaakkola flapping before a composed Bush hooked in the equaliser, before striker Michael Cheek could stab it over the line.

Five hundred and twenty one travelling fans went mental behind the goal, some breaking through perimeter fencing to join in with the players’ celebrations, and three of us sitting in the press box high in the East Stand enjoyed the moment too.

“I was just trying to hook it across the box,” revealed Bush.

“It was only because of the angle that I saw it had gone in before Cheeky had touched it but looking at the videos it could have been Cheeky’s goal from where he was.

“But we always try to keep the ball alive in the box and we’re always a danger at set-pieces so just being able to have been in there and have people amongst it, I know I scored but take another look we’ve probably got about four players inside the six-yard box which says something and we’ve kept it alive and got something from it.”

Bristol Rovers – now tenth in League One – will not fancy coming to Hayes Lane on a Tuesday night, on the 3G playing surface and an expectant packed stadium.

The support behind the goal at the away end at Bristol Rovers was immense and fans are being asked to continue that at Hayes Lane on Tuesday night to give BT Sport exactly what they are coming for – a FA Cup giant-killing act!

Bromley lost top spot in the Vanarama National League after fighting back from being 3-0 down to play-off chasing Harrogate Town at Hayes Lane yesterday, before fighting back with Reeco Hackett-Fairchild scoring before Bush scored twice after half-time.

Barrow came away from Notts County with a 3-0 win yesterday to leapfrog over Bromley at the summit with 37 points from 20 games, level on points with Bromley, who have slipped down a place into second.

That is the fighting spirit that the Hayes Lane faithful want to see on Tuesday night as Bromley aim to reach the Second Round for the first time since playing Watford over two games back in 1945.

It’s going to be one special night at Hayes Lane on Tuesday night as Smith aims to bring long-awaited FA Cup glory to his home-town club to set up a home clash against League Two side Plymouth Argyle in the Second Round on Sunday 1 December 2019 (14:00).

Bromley now has the team that can make this happen and Bush is keen to pull off Bromley’s first-ever FA Cup win over Football League opposition.

“It’s everything, it is everything for the fans and people who have been associated with the club for a very long time,” said Bush.

“Days like this is what people dream about in football.  You want a bigger team coming to your home ground and feeling what it’s like to be in a non-league ground again and we’re just giving ourselves every possibility.

“I know we’re looking at it as a game where we’re looking to get into the next round but we want to win each game as it comes and make sure we have the right application going into the game and the rest will take care of itself.

“The boys have been working extremely hard over the last couple of days to get ourselves ready and we’ll be ready on Tuesday and up for it as we were last Sunday.

“It’s having the right application and approaching every game the same way and trying to get a good result.”