BROMLEY have pulled off a coup by appointing Steve Lovell as their assistant manager.

Lovell joins the Vanarama National League club after being axed by Gillingham manager Justin Edinburgh in May. 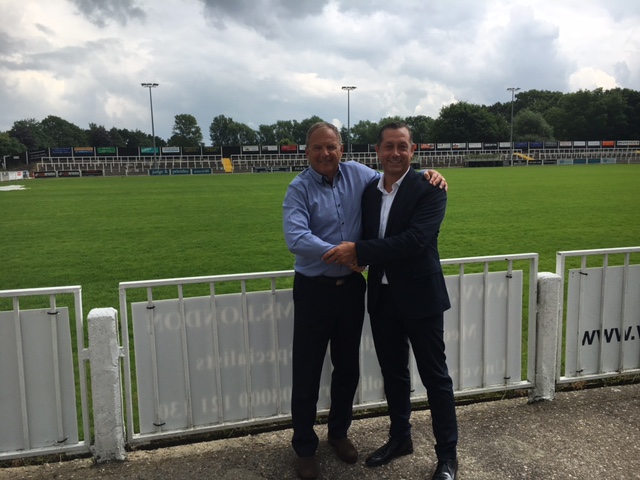 FRIENDS REUNITED: Steve Lovell (left) is welcomed to Bromley by manager Neil Smith.  Lovell was a player, coach, community officer, under 18 coach, under 17 coach and manager during his 20-year love affair at Gillingham.
Photo: Bromley FC

He was at Priestfield Stadium for three seasons, including the position of caretaker manager alongside Andy Hessenthaler when Peter Taylor was sacked in 2014.  He scored 104 goals in 275 matches for Gillingham as a player.

Lovell, 55, began his playing career at Crystal Palace in the late seventies and earned over 70 caps for The Eagles.  Following his departure in 1983 he went on to enjoy spells at both Millwall and Gillingham, while also achieving six international caps for Wales between 1981 and 1986.

Bromley manager Neil Smith told www.bromleyfc.tv: “It is fantastic news to have Steve Lovell join the coaching staff.  His experience will be invaluable this season.

“I have known Steve for over 20 years as both player and a coach.  I cannot wait to start working with him ahead of pre-season.”

Mark Hammond remains a part of the first team coaching staff in addition to his new role as Academy director.

Meanwhile, The Ravens, who finished in fourteenth-place on their National League debut last season, have cancelled Ali Fuseini’s contract by mutual consent.

Holding midfielder Fuseini, 27, has been signed by Vanarama National League side Margate on a free transfer.

Smith said: “I would like to thank Ali Fuseini for his services to the club and he will always be welcome as a member of the championship winning side.  We wish him the best of luck at his future club.”

Fuseini tweeted: “Thank you to Bromley FC, especially the fans, for the memories, support and good times.  Best of luck for next season.  Delighted to start a new chapter of my career at Margate FC and continuing my journey.”

Meanwhile, Margate, who escaped relegation by the skin of their teeth last season, have confirmed that they will not be completing the signing of Mike Fandop Talum from Billericay Town.

A statement, which was posted on www.margate-fc.co.uk, said: “The player was represented as a free agent and Margate Football Club only entered into negotiations with the player on the basis that he was available on a free transfer.

“Information was provided to us before talks began that an agreement was in place between the player, his representative and Billericay Football Club whereby the player was allowed to leave on a free transfer.

“Billericay Town Football Club have made it clear that in their opinion no such agreement exists with the player and that they are due compensation for the player.

“Margate Football Club will not be held to ransom for a fee that they believe is not due and have decided not to go ahead with the signing of the player.”