Howe, 28, was one of eight players to be released by Ebbsfleet United following their failed promotion bid from the Vanarama National League South after losing at home to Kent rivals Maidstone United on penalties in a dramatic promotion final at the end of last season. 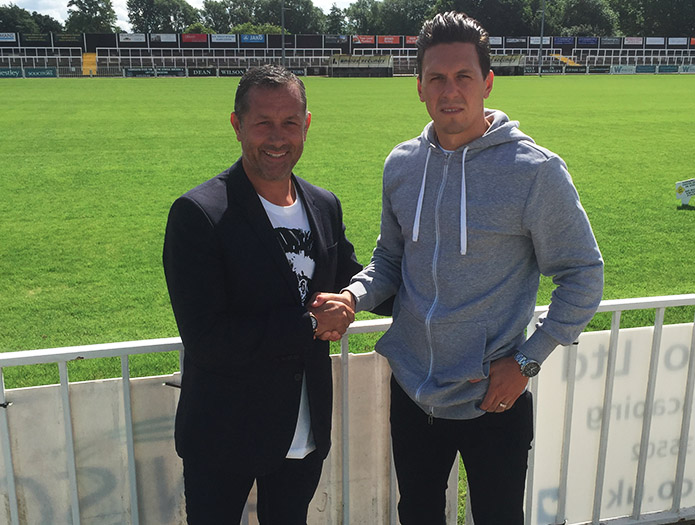 Howe, has put pen to paper on a deal to sign for Bromley, who finished a respectable fourteenth-place in their debut Vanarama National League campaign last time out.

Smith told www.bromleyfc.tv: “I am really pleased, we have been taking to a few players since the end of the season and it’s fantastic that Joe has agreed to come on board.

“He is a right-back that I’ve admired for a few years’ now and he will be a great addition to the squad.

“He comes with experience, he is 28, so he is at a good age.  He has played Conference National level with Ebbsfleet and has been at that club trying to get back to that level. He knows what it’s like to play under pressure.

“He likes to get forward, he has great delivery and is both left and right footed, so he brings us cover on that side as well.”

Howe, who will join up with his new team mates at the end of June for the first pre-season training session at Hayes Lane, made over 200 appearances for The Fleet after joining the Stonebridge Road club in 2010.

Howe added: “Delighted to have signed for Bromley and begin a new challenge. Neil Smith is a manager I’ve worked with in the past and I’m looking forward to working with him again.  His enthusiasm is infectious and he’s a manager that you want to give your best for.”

Smith revealed that former Newport County midfielder Max Porter, 28, is working hard to get back to fitness after a frustrating season.

Porter lit up Hayes Lane with some eye-catching performances last September when Bromley’s attacking flair play caught the eye but had to settle for a coaching role with the club’s Academy when he was on the sidelines through a long-term injury.

Smith said: “It was a frustrating season for Max.  People forget that he was unlucky with his appendicitis early on in the season before picking up an injury upon his return.

“A few weeks ago Max underwent a very successful operation which discovered a hidden trapped nerve as a result of his appendix removal.

“He’s been coming in during the off-season for regular training sessions with the physio and his attitude has been great.  To welcome back a fit Max Porter along with Louis Dennis for pre-season will be a massive boost to the team.”

But Smith hinted that star-striker Moses Emmanuel, 26, who has scored 37 goals for the Ravens during the past couple of seasons, may have left the club.

“There could still be one or two leaving us but we are talking with a few attacking players both wingers and forwards ahead of pre-season and I hope we’ll be in a position to announce further signings very soon,” added Smith.

Smith, meanwhile, is set to announce a new addition to his coaching team shortly and is keen to continue to blood Academy produced players into the first team squad.

“Thomas O’Connor will be one of two or three who will link up with the squad again as they continue to gain experience with the club.”

Bromley kick-off their eight-match pre-season campaign with a trip to their traditional rivals Dulwich Hamlet on Saturday 9 July (12:00pm).

Gavin Rose’s side were defeated by East Thurrock United in the Ryman Premier League Play-Off Final last season after finishing in fifth-place in the table.