The 52-year-old former Newcastle United, England and Tottenham Hotspur great staged An Evening with Paul Gascoigne at Hayes Lane on Thursday and the club were delighted to welcome Gascoigne back to the club on Friday morning, following an invite from manager Neil Smith and he spent time with the first team at training meeting the players and staff. 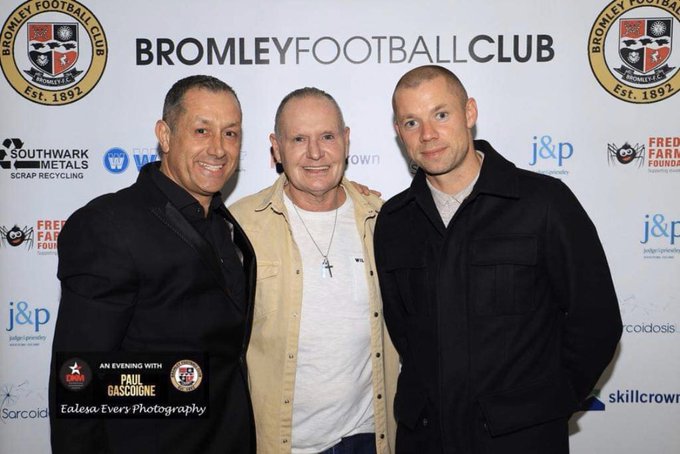 Paul Gascogine will be attending Bromley's Vanarama National League clash against Solihull Moors today. He is pictured in between Bromley's management team of Neil Smith (left) and coach Alan Dunne and (below) meets the Bromley squad after training.
Photos: Bromley FC

Smith, a former team-mate of Gascoigne at White Hart Lane, is delighted to welcome the legendary player to watch his first Bromley game, to inspire the players’ back to winning ways following a slump in form.

Bromley have slipped down the Vanarama National League table after losing four straight league games and are in seventh-place in the table on 50 points with 13 games left to play, which is the last play-off berth.

Opponents Solihull Moors sit in ninth-place with 47 points on the board but with a game in hand and a win for the managerless club, who recently parted company with former Southampton and Blackburn Rovers goalkeeper Tim Flowers, will take them above Bromley on goal-difference.

“Gazza has said he will be coming to our home game against Solihill at Hayes Lane. He has been brilliant and wants to get behind the players.” Said Smith on his Twitter account.

“It was great having Gazza at Bromley FC on Thursday night and then coming to say hi to all the players and staff on Friday morning at the ground. He was looking really well and in fantastic form.”