I’m feeling quite emotional that it’s all over in terms of playing, says striker Adam Birchall

ADAM BIRCHALL has announced he has retired from playing football, at the age of just 31.

The Maidstone born striker started his career in the youth ranks at Premier League giants Arsenal back in 1994, before departing in 2005 without making a first team appearance.

He dropped down to the Football League to play for Wycombe Wanderers, Mansfield Town and Barnet before becoming a hit for Dover Athletic.

He smashed the Conference South goalscoring record scoring 45 goals in 49 appearances during the 2010-11 season and was the leading goalscorer in The FA Cup as Dover Athletic reached the Third Round under Martin Hayes.

A move to Gillingham followed on a three-year contract but injury restricted him to 17 appearances at Priestfield Stadium, winning the League Two title in 2013.

He signed for Dartford scoring three goals in 29 appearances during two Conference campaigns.

He signed for Bromley on a two-year contract where he scored a couple of goals but most of his appearances were as a second half substitute during their Conference South title winning campaign in 2014-15 (pictured below, Photo Twitter). 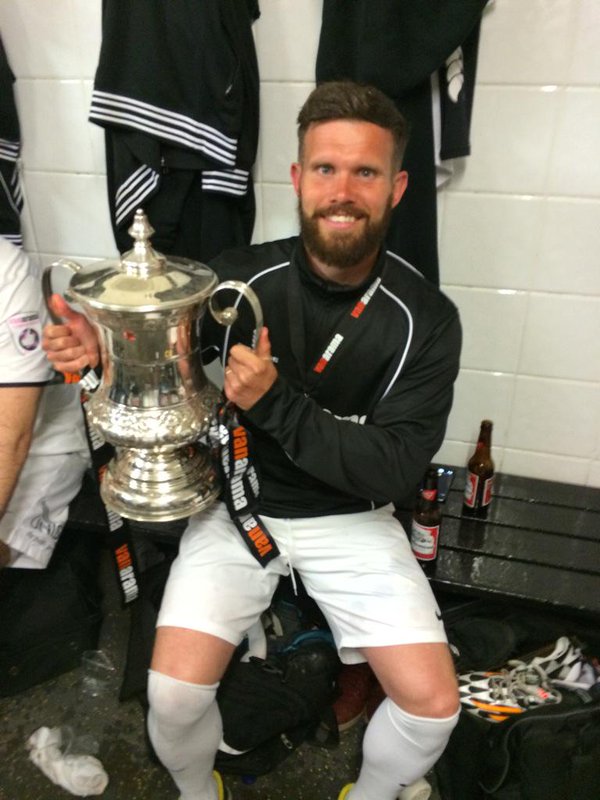 He was sent out on loan to his home-town club Maidstone United last season, scoring a couple of goals in 15 League appearances and was presented with a promotion winning medal after the club defeated Ebbsfleet United on penalties at Stonebridge Road in a dramatic Promotion Final in May.

Birchall has decided to hang up his boots today to concentrate on his coaching career, where he has a lot to offer.

He thanked fans’ for their messages that he has received over Twitter since he announced his decision this morning.

“I feel very blessed and overwhelmed by the support and love shown by fans from all the teams I’ve played for in the news that I’ve retired,” said Birchall.

“I’m so lucky to have achieved my boyhood dream of being a professional footballer and want to thank all the fans, team mates, managers, coaches, family and friends who made it all possible.

“I’ve got some amazing memories that I’ll take forward with me into life and I’m feeling quite emotional that it’s all over in terms of playing.

“My decision is based upon the last few years and the performances I’ve shown which have been quite frustrating at times. Having said that, I’ve always given my best and have thoroughly enjoyed playing for every single team I’ve represented.

“I’m so lucky that I’ve achieved three promotions in my career as some people go through their time playing never achieving things and obviously breaking the Conference South goalscoring record, which is an achievement I’m truly proud of.

“One big memory for me is winning League Two with a fantastic squad and a support that was inspirational and I’ll never forget celebrating in front of the Rainham End.

“The future for me will certainly be involved with football and I am very passionate about coaching, watch this space.

“I want to thank the press and in particular the Kent press who have always been supportive of me and shed an honest and positive picture of me.