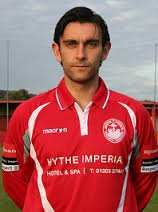 Lloyd Blackman, pictured during his time at Hythe Town, admits his players' let themselves down.
Photo: www.hythetownfc.co.uk


Paul Chambers’ side missed out on a trip to Ascot United in the last sixteen on 7 February after being outclassed by the Thurlow Nunn Eastern Counties League leaders, who raced into a 4-0 lead at the break.

Goalkeeper Joe Mant put in his worst performance for Ashford and he was lucky to stay on the pitch after giving away a tenth-minute penalty, which was tucked away by Matthew Daniels, who completed the rout in the final ten minutes on the breakaway.

Paul Cook doubled Norwich United’s lead after twenty minutes, before Matthew Blake scored two goals in four minutes to send the Kent side crashing out of the Fourth Round for the second successive season.

“They had a few good players, there’s no question about it. They’re a good side. They’re not top of their league for no reason but generally, everything that they did they just performed better than us and I think the best way of saying we underperformed against their over performance and it just led to a performance that was immensely disappointing.”

Ashford United could have delayed the inevitable had they scored with only 49 seconds on the clock.

Gary Mickelborough was released down the right and Norwich United keeper Duncan McAnally came out to the corner of his box to collect the ball.  However, the keeper failed to keep hold of the ball and the winger cut the ball back to striker Stuart Zanone, who swept a first time shot towards goal from sixteen-yards which was cleared off the line by recovering right-back Jamie Speller.

But Norwich United opened the floodgates inside the opening ten minutes when Daniels played the ball into Blake, who cut the ball across the penalty area to Adam Hipperson, who was brought down by Mant after he cut past the keeper.

Despite being in a central position, referee David Spain brandished Mant a yellow card and Daniels stepped up to plant his right-footed penalty into the left-corner past Mant’s despairing dive.

“There was a couple of questionably decisions from where we was standing,” claimed Blackman.

When asked whether his goalkeeper was lucky to stay on the pitch, Blackman replied: “I question the penalty anyway, so I don’t think so. I think the lad’s going away from goal and I think a yellow card was justified.  I question whether he was offside (in the build-up to the foul) in the first place.”

Norwich United, who arrived in Kent sitting six points clear of Godmanchester Rovers, dominated for the rest of the half.

Skipper Andrew Eastaugh clipped a long ball out of defence to release impressive striker Blake, who cut in from the left and drilled his shot into the foot of the side netting.

But Norwich United killed the game off as early as the 20th minute.

The visitors’ clearly done their homework on Ashford United, with central defenders Pat Kingwell and Danny Lye clearly to blame for allowing Cook too much space inside the penalty area.

Hipperson found Cook with a defence splitting pass and the striker had time and space to pick his spot – drilling his right-footed shot into the bottom far corner.

Blackman said: “They play the ball into the channel.  They’re quick, they’re lively, they’re direct at times and they’re powerful and it’s disappointing.

“We knew what their strengths were, the ball over the top of the back.  I don’t think we dealt with that very well. I don’t think we got pressure down going through the midfield.  The service to the front players wasn’t good enough.”

Mant was having a nightmare. A poor kick went straight to Cook on the edge of his penalty area but Ben Thompson was offside by the time he swept his shot into the bottom left-hand corner.

Norwich United’s other central defender, Greg Crane, clipped a long ball out of defence and Hipperson directed his free header wide from sixteen-yards.

Ashford United called visiting keeper McAnally into making a comfortable save in the 28th minute.

Gary Clarke’s diagonal pass found Mickelborough on the right, who drilled his right-footed shot towards goal which deflected into the keeper’s hands off left-back Cusack.

Liam Whiting cut into the Norwich United box and his low drive was pushed behind for a corner by McAnally, diving full-length, low to his right.

Marsden swung in the resulting corner towards the near post and Lye came up from the back and saw his header headed off the line by Cusack.

Eastaugh clipped another long ball over the top of a slow Ashford back-four to put Blake through on goal, who drilled his low shot into the bottom left-hand corner with only Mant to beat in the 38th minute.

Blackman, now sounding like a broken record, said: “Again, they were direct and we didn’t deal with it.  That’s not one or two, it’s three, four or five chances that they had from that.

“It’s exactly the report I had on them, three boys up front, clinical. We just didn’t deal with it.

“We told them (our players) numerous things and we were just unable as a collective team to be able to deal with their strengths and unable to expose their weaknesses.”

Cusack swung in a corner from the right and Mant failed to gather the ball, which deflected through a crowd of players and Blake was on hand to stab the ball over the line from close range at the far post.

“I mean, I’m not going to dig anyone out. It’s far from it. Everyone will look at their performance tonight and think they could have done better,” said Blackman.

“Everyone’s going to go on at Manty but he’s a young lad and he’s going to improve but generally we can talk about protection on him, maybe we exposed him a bit too much.

“But generally everyone’s performance wasn’t up to scratch and unfortunately as a goalkeeper he’s going to be isolated but he was no worse than anybody else.”

The hosts created the last chance of the first half when Kingwell directed his downward header into McAnally’s hands following Mickelborough’s free-kick from the left.

Chambers made one change at the break and Andy Irvine came on for left-back Luke Cuthbert.

“The feeling behind the change was we’ve got to try something. We’ve got to do something,” said Blackman.

“We shifted it around purely to be able to have a target man up there. The pressure was high on us and keeping the ball going up front and we had someone up there who could physically deal with that situation.

“Our service up to the front men second half wasn’t good enough so we were 4-0 down at that stage.

“We were prepared to lose seven or eight, just as long as we’ve given ourselves a chance and that’s how we turned up towards the end. I think we played pretty much four or five up top. We had four strikers up there. The game was, it didn’t matter if we’d lost 10-0 second half because we were 4-0 down at half-time and we had to go and try something.”

Ashford had to play for pride during the second half and Kieran Byrne went close with a curling free-kick from 35-yards, which flashed agonisingly past the foot of the far post with the keeper struggling to get across, after only 82 seconds.

Ashford’s best chance on a miserable night, however, arrived in the 51st minute.

Marsden cut a short corner back to Byrne, who played the ball inside to Whiting, who cracked a powerful left-footed drive towards the top left-hand corner from 30-yards, which forced McAnally to use both his hands to parry the ball away towards safety.

Blackman added: “We were chasing the game by then. It was pretty gung-ho for us, stick the ball up there and hope for something to change because really we weren’t at the races to be able to break them down.

“It was pretty much desperation by that stage. I’d call them half-chances. I don’t think we had any real chances today and to be perfectly honest I can’t remember us creating anything that was worthwhile!”

Mant made a morale-boosting save when he rushed off his line to thwart Daniels, who stole the ball from Whiting and strode forward into the box.

Daniels cracked an angled right-footed half-volley sailing past the far post from 25-yards, before Byrne whipped a free-kick into McAnally’s gloves from 35-yards, the Norwich keeper collecting at the second attempt.

Ashford United went into this game unbeaten in six games, but a group of young fans chanted “We lose every week, you’re nothing special,” before Chambers went for it and threw bodies forward for the final fifteen minutes in search for a consolation.

Substitute Irvine – who was Tunbridge Wells’ goal-machine all the way to the 2013 FA Vase Final at Wembley Stadium – knocked the ball down to Kingwell who looped his right-footed volley just wide of the right-hand post from 25-yards.

Crane clipped another long ball down the right channel for Thompson to latch onto and once he reached the by-line he went for goal himself. Mant dived full-length to his right and got a slight touch and the ball rolled behind beside the corner flag.

But Mant was picking the ball out of his net for a fifth time in the final ten minutes when Daniels glided past Lye and slotted his shot into the bottom right-hand corner.

“We’ve got a lot of men forward trying to maybe salvage something but by then you’re over-committed and we were always sceptical to a breakaway at the end.  The fifth goal was inevitable really, unless we managed to get back into the game, by then the game was pretty much dead.”

Ashford substitute Michael Smissen steered his shot towards the bottom corner, which was gobbled up by McAnally, before Whiting clipped the ball up from the half-way line and target-man Kingwell’s looping header was saved.

Zanone was released down the left channel but Eastaugh slid in and the quiet striker blasted his left-footed drive over the top of the near post.

Norwich United went close to scoring goal number six but Speller curled his free-kick around the far post from 20-yards but by then most Ashford United fans were heading home bitterly disappointed.

Ashford United travel to 12-placed Holmesdale on Saturday sitting in sixth-place in the Southern Counties East Football League table with 37 points from 19 games.

Blackman said: “We’ve got to regroup. That’s done now.  We’ve just said to the lads we’ve wiped the slate clean. That’s it. We’ve told them what we thought.

“Strong words (were said to the players). I’m not going to dig them out. It’s not a witch hunt but the players are wise enough and clever enough to know what they’ve done weren’t good enough.

“I’ve said to them that (Norwich United) are a benchmark. If they were in our league I think they’d be right up there and I said if you want to be competing at the higher levels or levels above then you’ve got to perform and use them as a benchmark.

“There’s positives to look at from tonight and that is the simple fact that we probably couldn’t play that worse again – and if that opens up a few of the boys’ eyes, then that’s a good thing.

“It was nothing to do with the fact our players aren’t capable of putting in a performance like we did.

“Individually and collectively we let ourselves down today and that’s the thing. If we had a good go, we can take getting beaten, that’s never in doubt.