I think good times are ahead for APM now, says manager Kris Browning

KRIS BROWNING says it’s a good time to be the manager of APM Contrast after receiving confirmation of their promotion into the Kent Invicta League.

The Aylesford based club have secured Step Six status by the controversial method of finishing in one of the top five slots in the Kent County League Premier Division. 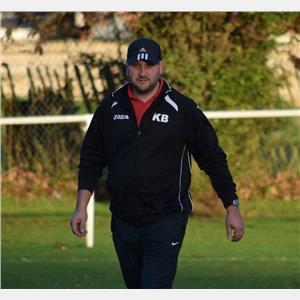 PROMOTED: APM Contrast manager Kris Browning is relishing the chance of managing in the Kent Invicta League next season after winning promotion via the controversial method of finishing in the top five slots in the Kent County League.
Photo: APM Contrast FC

Metrogas, who sealed back-to-back titles under Roy Davies (who is now the  manager of Kent Invicta League side Kent Football United), were unable to win promotion as their ground in New Eltham stages cricket in the summer.

APM chairman Phil Hudson has only been at the helm for one season but the Paperboys will be competing against former landlords Bearsted in the Kent Invicta League.

“I was quite pleased with a fourth placed finish if I’m honest. It was another tough league, another tough season,” said Bristol born Browning.

“I lost a few players in pre-season again to higher clubs, which happens to us so we had to rebuild in certain areas.

“Considering we were fourth-from-bottom in October, losing four on the bounce, I was quite pleased really.”

Browning has been waiting patiently for the Paperboys to clinch promotion.

He said: “Absolutely delighted with that!  Obviously the last two season’s narrowly missing out by three points to Sheppey, who had a player budget and money and everything else, losing out to them devastated us really.

“The season before that we lost out to Fleet Leisure, who are called Gravesham now. We lost out to them as well so to do it this time around is really good.

“The chairman’s not giving us no set in stone objectives in that league. We just have to go out there and compete and do the best we can. It’s new territory for us so we need to strengthen the squad, that’s for sure.”

But Browning admitted the club will be entering the Kent Invicta League without floodlights at their ground.

They play at Cobdown Sports & Social Club – the venue they share with Vanarama National League South Ebbsfleet United, who use the facility for daytime training.

Browning said: “We haven’t got lights yet but there’s some new owners that have taken the compound, the sports club and all the grounds and everything else who our chairman is talking to at the moment.

“The plans there with regards to lights will happen and that will happen. The facilities are good at the moment but the things they’ve got planned are superb!

“The chairman is in with them really at the moment but he’s not giving too much away, but he just said to me the plans that they’ve got there are amazing and we’re fully involved in it.”

Browning revealed he will strengthen his squad as he targets a top eight finish in the Kent Invicta League.

“We’re planning for next season. I’ve targeted a group of players who I want to attract to the club,” he said.

“We are going to strengthen in most areas. We’re going up to another standard, it’s another level. I’m hoping to keep the original squad I’ve got and then add to it.

“Well, I’d hope to finish in the top half. I think that’s a realistic objective. I think a top half finish for the first season would be ok.

“There hasn’t been no pressure put on me as manager but we’ll be looking to compete. I think realistically a top half finish would be good.”

Reflecting on his previous seasons at the club, Browning added: “I’ve just finished my seventh season. I took over in 2008 as player-manager. I took them over when we was in Division Three East. I finished up playing at Faversham Town and it was just by chance a mate asked me to come round and help out and I saw the potential there.

“Every season my problem is we had a good season -  we’ve never finished below the top five – and club’s come in and take my players every pre-season.

“It just can’t maintain continuity within the side. I look through the Ryman and Kent Leagues (Southern Counties East Football League) and there’s 20 players playing in that standard now who were with me!”

Browning was full of praise for new chairman Hudson.

He said: “Our new chairman, Phil Hudson, in his first season has got both teams promoted. If it wasn’t for him, we wouldn’t be where we are now.  The work he’s done has been absolutely amazing!

“The chairman, as driven as he is, I think good times are ahead for APM now.

“I enjoyed the time cutting my teeth at the Kent County level. It’s been a good learning curve for me at that level and I’ll be testing myself at a higher level.

“When Maidstone are away, hopefully we’ll try to attract a few more fans down to come and watch us.  We’re the next team underneath Maidstone with Bearsted as well.

Meanwhile, Browning is inviting potential new players down to Cobdown Sports Ground for pre-season training on Thursday 2 July (19:15) and on Saturday 4 July (12:30).