AFC CROYDON Athletic have been notified by The Football Association that they will be playing in the Southern Counties East Football League next season.

The Thornton Heath based outfit finished runners-up to Farleigh Rovers in Division One (Step Six) of the Combined Counties League last season and their reward is promotion and a switch across to play in the artist formerly known as the Kent League. 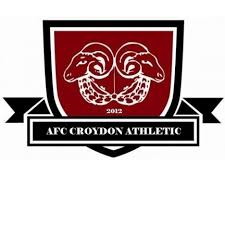 “The Rams leave behind the Combined Counties League who were very welcoming after we had reformed in 2012,” said a club statement posted on their website.

“On behalf of the club we wish the many friends we have made well and look forward to seeing them again in the event our paths cross.

“We also look forward to joining some near neighbours in the former Kent League.

“Although we will plan for the longer trips to play the likes of Deal Town, Ashford United and Canterbury City, we will also see some local derbies.  Fisher, Holmesdale and Beckenham Town all played in that league last season as well as the likes of Cray Valley PM, Erith Town and Erith & Belvedere with whom we have clashed in Cups in recent times.

“It also means that the Rams join the Trams.  Croydon finished 19th in the league last season so bragging rights will be at stake too.”

The League have lost champions Phoenix Sports, who were promoted to Ryman League Division One North, Woodstock Sports (folded) and Surrey-based Lingfield have transferred to the Southern Combination League at Step Six.

Kent Invicta League champions Hollands & Blair have received official confirmation that they have been promoted into the division.

Rochester United, who finished at the foot of the table last season, maintain their Southern Counties East Football League status.

That means the League will consist of 19 clubs next season, one less than last season.