We wish to be a blue print for other non-league and grassroots clubs that want to progress through the National League System, says AC London boss Prince Choudary, 20

ACADEMIC CLUB LONDON chairman/manager Prince Choudary says he wants to make his club a force in the Kent Invicta League next season.

The unknown quantity were accepted into the Step Six league last Wednesday, bringing the division up to 20 clubs for the first time. 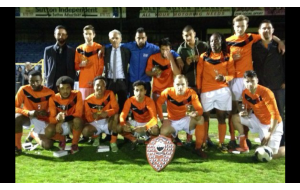 APM Contrast, FC Elmstead, Forest Hill Park and Phoenix Sports Reserves are the new sides that will compete in the league, which kicks off on Saturday 8 August 2015.

Choudary will go into the record books as at the age of just 20 he will become the youngest manager and chairman in senior football.

The club will be playing at the biggest venue in the division – the 16,000 all-seater Crystal Palace Sports Arena.

“Believe it or not, but I was only 16 when I formed Academic Club (AC) London as a youth team in 2012, a non for profit club based in the south London remit,” said Choudary.

“It started off as a little kick about in the park with some mates. It progressed quickly and I didn’t waste any time in entering us into a local Saturday football league, a league in which the team proved to be quite successful in.

“A year later, I expanded the club and formed a first and reserves team as well as three junior teams, all very competitive in their respected leagues.

“My main aim was to work on my revolving academy squad and progress talented players to a higher level.

“The club also contracted former SP Benfica coach, Valdemar Afonso, an UEFA Pro Licence who has over 40 years of experience working in professional football leagues across the world.

“After two years of supplying players to higher leagues, the club was contacted by a playing member from the Conference League who wanted to join the club.

“This confirmed our previous aspirations that the club is ready to participate at a higher level.

“Therefore, last season the club did not play in any league as my main aim and desire was to get the club in to the National League System.

“In an unbelievable story, the club has made the transition from grassroots football to semi-professional football in only three years!

“AC London’s philosophy is to build a team that plays attractive football by implementing the Dutch Total Football philosophy, a football style that was created by Marinus Jacobus Hendricus Michels, an ex-Dutch football player and coach.

“Furthermore, the club aim to develop players into better human beings by teaching them ethics and morals through a rounded learning environment using Margaret Whitehead’s ideology of Physical Literacy at the forefront of all training sessions, by training in this way we hope to give players the tools and assets needed to be successful in life, on and off the football pitch.

“The clubs home ground gave goose bumps to everyone involved at AC London – the Crystal Palace National Sports Arena – the Wembley of non-league football, has an amazing 16,000 all-seated capacity.

“I personally consider it as one of the best grounds below Championship football and the best in non-league football!

“The pitch is currently being relayed and will be in immaculate condition for the start of the season.

“The clubs ambition over the next year is to develop a FA Charter Standard youth Academy which will consist of under 8’s all the way up to under 18s.

“The reasons for this is to ensure the club has a pool of talent we can turn to over the years as we progress through the footballing ladder and also give opportunities for youth in and around London an outlet to learn, grow and express themselves in a constructive environment.

“The long term goals and aspiration of AC London is to be a stable club in professional football as well as the primary driver of youth development in England.

“We wish to be a blue print for other non-league and grassroots clubs that want to progress through the National League System.

“Applying for Step Six football was an easy decision but it definitely wasn’t an easy process and it certainly came with its own barriers and difficulties.

“The main problem I would say was getting a ground as our ground failed inspection.

“Finding a team to ground share with was a big issue.  We must have contacted every single team within acceptable distance for the Kent Invicta League but got no luck. One club from the Ryman League reluctantly offered to share with us, only for £35,000!

“The deadline passed and it was looking all doom and gloom. However, following a final extension to the deadline, an 11th hour phone call was received confirming availability of our home ground in Crystal Palace.

“Like many youngsters I had a dream of playing professional football.  I was at Crystal Palace as a keeper when I was younger. I broke my arm twice and dislocated my finger on a few occasions, playing wasn’t going to be where my calling was and I thought football was never going to work out but I didn’t want to just give up my dream so I decided to set up my own football club whilst studying.

“I was recently told that I will become the youngest ever manager and chairman in non-league football!

“It is a surreal feeling but it is something I relish. I also work in the public sector full time so I’m not sure how I am still sane!

“There have been times I’ve got gloves on and played in goal for AC London due to being short on goalkeepers. I’m pretty sure there is no doubt that this approach has been influential in the clubs family based environment.

“Chairman is the most stressful role at any football club. The only perk of being chairman is that I can’t sack myself as the manager! But in all seriousness I hope my club will be a force in the Kent Invicta League and make our supporters proud.

AC London open their pre-season campaign with an away game against Essex Senior League outfit London Bari on Wednesday 15 July.

All games are being played away from Crystal Palace whilst the pitch is being prepared but other games are being lined up against CB Hounslow United (18 July) and West Ham United Academy, London Apsa, Farleigh Rovers and Banstead Athletic.