RICKY FREEMAN says he has signed for Whitstable Town to win trophies.

The 30-year-old striker suffered relegation with his home-town club Chatham Town in April and has decided to play his football in the Southern Counties East Football League with Whitstable Town instead when the new season gets underway on 5 August 2017. 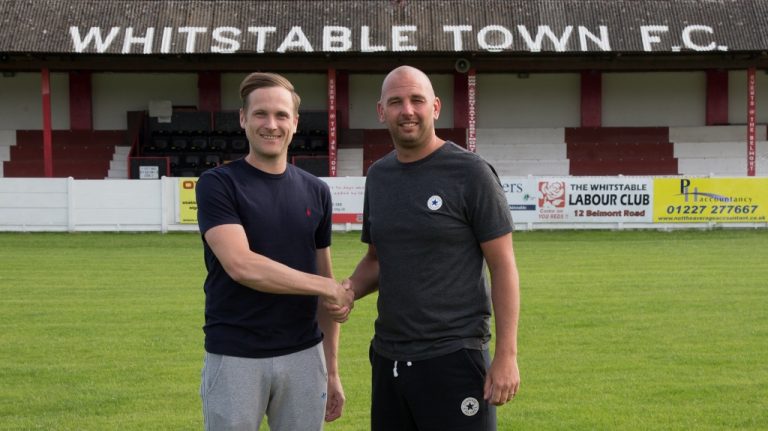 “I had an awful season! If I’m honest, one to forget,” admitted Freeman, a carpenter.

“I made some poor playing decisions. I shouldn’t have left AFC Hornchurch.  I started the season well for them.  I found the travelling difficult and had the chance to go back and play with my friends at Phoenix Sports, which is a lot closer to home.

“It just never worked out going back.  Phoenix is a great club and I wish them all the success in the coming season.

“I left Phoenix and went to Chatham to try and help an old friend Paul Piggott to get them out of trouble.  It was just a little too late.  It’s a shame as it’s a top club.

“Relegation was a horrible feeling, something that I don’t ever want to experience again.  I hope that Chatham can bounce back, I’m sure they will.”

Freeman revealed that he had offers from unnamed Isthmian League, Essex Senior and Southern Counties East Football League teams – but has opted to sign for Scott Porter’s Whitstable Town.

“It was a tough decision. I had to evaluate my options and what was the best deal for me,” said Freeman.

“Once I had met Scott and he told me his plans for the season and the players he was bringing in, it was an easy decision.

“As a manager at this level, Scott’s as good as you can get and his record speaks for itself.

“I signed for Whitstable to win trophies.  I believe with the squad we have got we will be successful.  I want to win the league, go on a run in The FA Vase and score plenty of goals.”

Freeman said that he suffered some niggly injuries at the end of last season “but they seem to be fine now.” He revealed that he started road running this week and “I can’t wait for the season to get underway.”

Freeman, meanwhile, faces stiff competition for his place in the forward line at Belmont Road, after Porter enticed striker Harry Goodger to sign for the club.

Goodger played for Hungerford Town in the Vanarama National League South last season but has decided to drop three levels to play for the Oysters next season.

“Harry is a massive signing for Whitstable Town,” hailed Porter.

“He’s returned to Kent and I’m pleased to have his signature on a one-year contract.

“Harry will bring strength, quality and experience to the front line.”