PHOENIX SPORTS’ defender Scott Whibley says he’s grateful to the board for taking the club from the Kent County League to Ryman League in seven years’.

The Barnehurst-based club lost their 33 match unbeaten record last Saturday when they lost 2-1 at home to an Ashford United side that played with ten men for 77 minutes. 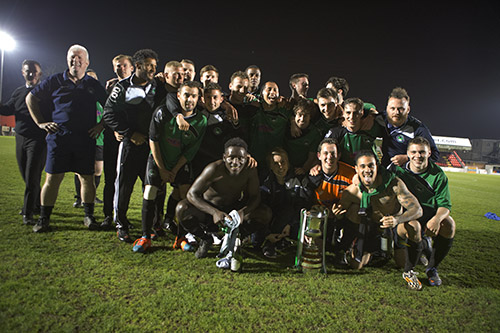 Aaron Jeffery scored the only goal of the game against third-placed Erith & Belvedere in the 31st minute, before getting sent off 40 minutes later for throwing a punch.

But Whibley and his team-mates held on to maintain their 28th clean sheet in 51 games to take the title with only one defeat in 35 league games.

It has been a great two years for the 25-year-old, who played at Wembley Stadium for Tunbridge Wells in The FA Vase Final.

“It’s amazing, you can’t describe the feeling. Wembley was different. It would have been even better if we won but tonight we’ve won it. We’ve done a job all year,” Whibley said at Park View Road on Wednesday night.

“We may not be the prettiest team to watch on the eye but we’re effective.

Whibley went close to scoring in the second half when his 65-yard clearance just sailed past the right-hand post.

He said: “I would love to say I looked up and saw him off his line and went for it, but it was just a clearance and it nearly went in!

“I would have loved it if that did go in because I would have got subbed off straight away!”

“It’s amazing! From day one against Greenwich at home something just clicked and it’s just carried on,” said Whibley.

“We had a little blip a few weeks’ ago but we’ve come through it.

“We had the disappointment (losing to Ashford) on Saturday but tonight, 1-0, local derby, you can’t ask for a better place to win it, can you?

“I think losing to Ashford helped in a way. It got it off our back and it gave us a kick up the backside that we needed because we weren’t working as hard as we can, so I think tonight we worked hard. We let them have the ball in their own half and we just picked them off, so it was a nice night tonight.”

Seven years’ ago, Phoenix Sports sealed the Kent County League Division One West title and two years’ ago this week they won the Kent Invicta League.

“It all stems from the board, the board are fantastic,” praised Whibley.

“It’s the best set-up that I’ve been involved in.  The credit has got to go to those guys because they’ve put in place everything behind the scenes.

“It’s a lovely little club as you know and we’ve just helped them along the way.

“I can’t thank those guys enough! I wouldn’t be stood here now talking about league championships so I’m really grateful to them. All the boys are.”

“We can just relax a little now, the pressure is off,” said Whibley.

“One defeat in 35 games. We can just go into the last three games and enjoy it, relax and see the season out.”

Whibley said he has committed himself to the club for next season’s Ryman League campaign.

“It stems from the managers. They set it off, hard work and they bring you all together.

“I’m just looking forward to being apart of it with Phoenix. It’s a great club.

“I won’t be going anywhere in the summer so I’m looking forward to playing at different grounds.

“I’ve been in the Kent League long enough. It will be nice to get out of it and see what the Ryman holds for us.”

For manager Steve O’Boyle, the likeable character deserves the accolades of guiding the club into the Ryman League.

“I’ll be honest with you, I go back to my Erith Town days,” said O’Boyle.

“I actually thought I had a really good side at Erith Town – I didn’t get the rewards for that.

“I did actually leave when we were top of the league and I put them in a very healthy position and I didn’t get the rewards for that at all.

It’s such a good club so I’ve made a good decision in the end.”

Phoenix Sports are such a friendly club and deserve their glorious rise up the leagues.

O’Boyle said: “I’ll be honest with you, unless you’re in the club, you don’t realise how big our club is.  I’ll tell you, it’s a big club.  People love Phoenix. You go in and you get the bug and I think that’s what a lot of our players do, they get the bug.

“People want to play for the badge. It’s not all about the money. It’s about the badge and that’s probably why we’ve done so well.”