The west Kent club climbed to the top of the Ryman Premier League table for the first time in their history.

But Worthing remain rooted to the foot, having leaked eleven goals in just 180 minutes of football, having lost 5-2 to Margate on Saturday.

There will be, however, rumblings in the Angels’ camp as to who scored the night’s first goal after 12 minutes.

Main used his pace to latch onto a through ball and delightfully lobbed the ball over the goalkeeper from the edge of the box.

But former Gravesend & Northfleet defender Scott Gooding was on hand to poke the ball over the line from close in, getting to the ball before Rebels’ defender Ben Andrews. 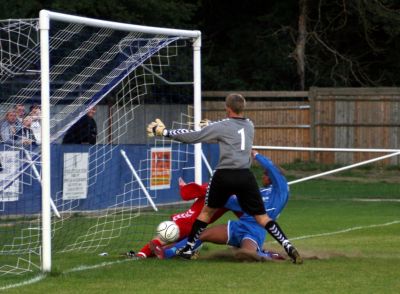 Scott Gooding (blue) claims he got a touch to Jon Main's 12th minute
opener as Tonbridge Angels went to the top of the Ryman Premier
League table following their enthralling 6-1 win over Worthing tonight.


Boss Tony Dolby, however, and club officials credited the goal to Main - but Gooding’s time to open his account for his new club came later on.

Tonbridge had shouts for a penalty turned down when Andrews’ escaped handball shouts before Jon Heath, who impressed at left-back, squared the ball to Robert Kember but the former Crawley Town midfielder blazed over.

But rampant Tonbridge had a goal ruled out for offside after 31 minutes.

Kember played a low pass to Main, who was offside, and the 25-year-old striker found the bottom right hand corner.

Striker Andy Martin, 26, went close to doubling the score when his right-footed 25-yarder dipped agonisingly over.

Worthing had their skipper Marc Cable to thank for preventing the second goal on the stroke of half-time, heading away Martin’s looping header from underneath his crossbar, following Fraser Logan’s whipped in left-footed corner.

If there were any hesitation in Main’s early strike, there wasn’t any when he doubled the Angels’ lead eight minutes into the second half.

Ray Powell, playing at right-back, played the ball down the right flank to Gooding, and his cross was cut back by Martin for Main to side-foot his 15-yard shot into the corner.

At this point, however, left-back Jon Heath was clearly the man-of-the-match with a solid display.

Heath, whose played for his home-town club since playing for the under sevens, and turns 21 in two weeks time, relished playing alongside Steve Aris, John Beales, who never puts a foot wrong and wins his far share of headers, and Powell at the back.

They were, however, assisted by Mark Knee, who got himself sent off for a deliberate handball on the line.

And Main sent goalkeeper Rikki Banks the wrong way from the penalty spot, but the match officials ordered a re-take.

But Banks guessed the right way this time, but couldn’t prevent Main from scoring his hat-trick with just 13 minutes remaining from the re-take.

Worthing did pull a goal back within a minute when much-travelled striker Stafford Browne opened his account for the new season.

Dolby and his assistant Mike Rutherford warned Kerr that Browne was going to take the 25-yard free kick quickly, but the former Gravesend & Northfleet goalkeeper didn’t take heed of the warnings and watched the ball slide into the net.

Main, who received a great ovation from the appreciative Longmead faithful when he was substituted, scored his fourth with nine minutes remaining.

He won the penalty himself when he left Cable in knots before he was brought down by the defender and coolly found the right corner from the spot.

Gooding made sure he did open his account for his new side, slamming home a shot in the 87th minute and substitute Adam O’Neil made it six three minutes later, curling a shot into the far corner following a lay-off from Luke Piscina.

“Firstly I’d like to dedicate tonight to my Mum who passed away during pre-season - rest in peace,” the four-goal hero told www.kentishfootball.co.uk after the game.

The 25-year-old revealed his goal targets for the season, adding: “I told Dobla I want to hit 30.”

And he is fully aware that his pace will cause many defences problems in this league.

“That’s exactly what Dobla said to me and I’ve worked really hard in pre-season and I feel sharper and faster than ever,” he warned.

Although Gooding claimed the first goal of the night, Angels’ player-manager Tony Dolby insists the goal should be credited to Main.

“I think quite comfortably you can say he’s got four goals tonight,” he said. “He was on fire, he took his first goal superbly. Two penalties, which we’re well earnt again and the other goal was a fantastic strike.

“He’s had a great start to the season and long may it continue!”

Dolby, whose side host Carshalton Athletic at the Betterview Longmead Stadium on Saturday, before they travel to Ramsgate on Bank Holiday Monday, was extremely pleased that they won their first home league game of the season in the impressive fashion they did,

“I couldn’t ask for anything more in our first home game to be fair,” he said. “We played some very good stuff, looked very solid defensively and all in all very happy with a professional performance.”

“I think the balance was there,” said Dolby. “We’ve been looking for that kind of thing. Andy holds the ball up very well, reads the game very well, and obviously flicks it on and Jon Main’s got the pace to hurt defenders and that’s how it’s worked over the last couple of games.”

* We bring you more reaction from this game later.