Tim Thorogood, the chairman and joint-manager of Ashford Town, insisted tonight that Anthony Allman is “committed” to his club.

The former Margate star, who played for Thorogood’s side during the first 65 minutes of their 2-1 defeat to Tonbridge Angels tonight, was all set to move to the Betterview Longmead Stadium, but Thorogood insists the midfielder will be playing for the Homelands club this season.

In an EXCLUSIVE INTERVIEW with www.kentishfootball.co.uk after the game, Thorogood explained Allman’s situation - and insisted he won’t be player coach at the Homelands club.

“I don’t make statements,” he said. “If Tonbridge make statements about Anthony Allman, I don’t know how many training sessions he’s been with them, but not too many from what I’ve seen.

“I’ve spoken to Anthony, as far as I’m concerned he’s committed to Ashford Town Football Club and not Tonbridge.

“I don’t know about all the talk, I’ve heard about it, one or two people have said about it but to be honest with you talks cheap.

“Whatever he does and chooses to do, Simon Glover’s here and committed to this football club, and as far as I know so is Anthony.”

Statements issued by Tonbridge Angels’ recently said Allman was going to Ashford Town as player-coach and that he’ll be making a decision on his destination “within two weeks.”

But Thorogood explained: “He’s not player-coach, he’s just a player!” He does some of the warm ups - he wants to get involved in some of the bits and pieces.

“He’s a great lad, very knowledgeable but he’s not a player-coach. He’s just here totally as a player.

“If players have got something to say, me and John (Cumberbatch) are not stupid enough to think we know everything, we’ll play the way we see fit but at the end of the day players' input is valid.”

Thorogood, meanwhile, was pleased with his side, despite going three pre-season games without a win - starting with a 1-1 draw against Folkestone Invicta before losing 2-0 to Windsor & Eton on Saturday.

The tall goalkeeper, who is expected to be understudy to Simon Overland when the Ryman League season kick’s off at Kingstonian on 19th August, dropped a cross from the flank and Luke Piscina gratefully accepted the gift, tapping the ball into an empty net from ten yards. 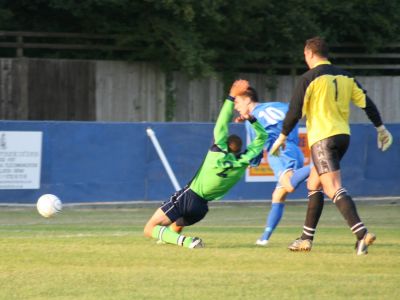 BLUNDER:  Ashford Town goalkeeper Dave Wietecha can only watch as
Tonbridge Angels' striker Luke Piscina taps the ball into an empty net
despite the efforts of Marc Cumberbatch (number 2).

Lively Piscina brought a fine save out from the former Bromley, Dover Athletic and Folkestone Invicta goalkeeper earlier in the game, denying the Tonbridge based striker from a shot from the edge of the box.

Piscina got behind the Ashford defence again but this time his low centre was met by Scott Kinch, but the shot from the summer signing from Tooting & Mitcham, took a deflection before hitting the side netting.

Ashford, meanwhile, created a couple of half chances through Joby Thorogood and former Lyon striker Goran Jerkovic, without troubling Aaron Kerr, whose signed from Gravesend & Northfleet.

But their best chance of the game came just past the hour mark through talented Simon Glover - whose set to return to Ashford from Heybridge Swifts.

After weaving through the Tonbridge defence, the left-footed 20-yarder from the former Folkestone Invicta star sailed past the far post.

Ashford striker Richard Sinden had a goal ruled out for offside, when he rifled home from eight-yards before Tonbridge went up the other end moments later to double their lead.

Jon Main, whose mother sadly passed away two weeks ago, crossed low from the left and fans’ favourite Ray Powell steered the ball into the bottom far corner. 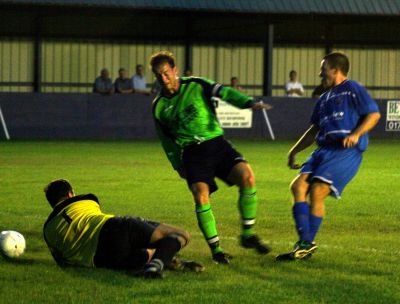 
Main somehow blazed high over from close range before Sinden’s effort was ruled out.

But Glover’s goal with 15 minutes remaining - scoring from a left-footed effort from 25-yards - was the best goal of the night and both sides had chances to score in the early stages.

SCREAMER:  Simon Glover (out of picture) scored the best goal of the
night for Ashford Town. Angels’ player-manager Tony Dolby was pleased his side won their opening warm-up game.

He said: “It was a good work-out for the first friendly. We made a few changes here and there and lots of positives of the game were taken."

“We’ve had a few games against them and they’ve been quite tight actually last couple of years,” said Dolby.

“They’ll be up for it but we’ll be going there wanting to prove a point again.

“Everything’s going according to plan so far. The players are gelling nicely, we haven’t actually had much in the way of football before tonight’s game so we’ve been doing a lot of physical work to get the fitness levels as high as we possibly can.

“We can have a look at it and we’ve obviously got Saturday as well and I think after those two games we’ll be getting quite bit of training, tactics and formation etc - I’m more than pleased at the moment.”

Tonbridge kick-off their Ryman Premier League campaign with a trip to Hendon on 19th August.

But Dolby admitted he’s not looking at their trip to north London at the moment.

“Far too far away. There’s a lot of pressing issues between now and then that need to be resolved and I just think that we’re on course and that’s obviously what’s it’s all about, being on course for that game,” he said.

“The league’s going to be very tough, there’s some strong teams with big budgets and some very good players in there but I think we’ve got a good squad and I’m relishing the challenge.”

Ashford Town travel to another Ryman Premier League side on Saturday when they travel to Hartsdown Park to tackle Robin Trott’s Margate.