All the plans for the future development are in place, it’s just the funding that we need, says Snodland Town secretary Terry Reeves

SNODLAND TOWN secretary Terry Reeves says the club are in a catch 22 situation when it comes to trying to improve their facilities at Potyns Field.

The NRG Gym Kent County League Premier Division club have plans to improve facilities at their ground at Paddlesworth Road and have targeted to reach the Southern Counties East Football League in the medium term. 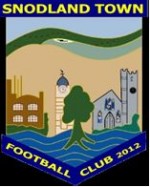 Snodland play on one of three full-sized pitches and their ground is pretty basic at present.

There is hard standing along the far side of the pitch, two dug-outs and a local company have donated the club pitch perimeter fencing around all four sides of the pitch which is more suitable to horse racing than football.

Kent Invicta League club Lewisham Borough have the same type of fencing alongside one side of their pitch at the Ladywell Arena.

The ground is fully enclosed by a green fence and the club use the changing room facilities at an adjacent community centre. There is a bar there, however, the football club are unable to use it at present and the match officials’ had to go without a pre-match hot drink ahead of Snodland’s  2-0 win over Staplehurst Monarchs United.

But the club have plans to build their own clubhouse and dressing rooms, install a 100-seater stand and floodlights, which will give them the chance to progress to the Kent Invicta League.

But in order to do that, Mr Reeves is searching for a rich benefactor to pump money into the club - or through grants.

“All the plans for the future development are in place, it’s just the funding that we need and that’s the silly thing about it,” he said.

“We can only apply for a £20,000 grant to get a stand to start with – you have to gain promotion before you can apply for the rest!

“The worst thing is you can’t actually start anything unless they grant you that grant then you’ve got to rush and get everything done within eight or nine months once you’ve gained promotion.

“Hopefully we can apply for a grant for a 100-seater stand that will go in this close season – that’s if we can get the grant. Unless we can find a rich benefactor who will give us the twenty grand!

“The bloke who I have been talking to hasn’t said he won’t be doing it so hopefully that will still go ahead.

“The water main will be going in in the next couple of weeks and we can start putting services in and things like that.

“We’ve got permission to do the floodlights but again it’s the funding!

“There’s companies about – telephone masts might be the cheaper option but we have to find the complete funding for that as well.”

Snodland Town play one level underneath the Kent Invicta League and Mr Reeves revealed that it would cost at least £220,000 to get the ground up to standard for that level of football.

Snodland’s players’ pay subs to play and the only match-day income that the club obtains is by selling a 12 page match day programme for £1 and through sponsorship.

“Obviously we need grants to do that.”

Mr Reeves wants support from the top level of the game, which is swimming in money thanks to a TV deal worth £5.135bn.

“The amount of money they’re getting out of TV rights now should be filtering down right to the bottom level because it gets down so far.

“Yes, they have their difficulties but there’s difficulties here at the grass roots level. Unless we find a rich benefactor or go through and we get our grants by the time it all goes through you might lose the players’ you’ve got.

“Metrogas (who have just won back-to-back Kent County League Premier Division titles) don’t want to go up yet as their grounds not good enough but the time they do get up they might not have the players.

“That’s the silly thing about it!

“What the solution is? I don’t know. It’s hard. It’s a difficult one if you see what I mean.”

When asked about the club’s medium to long-term aims, Mr Reeves replied: “We’ve got a chairman and a committee in place who are working on it.  If we can’t get grants we’re trying to get the funding elsewhere like sponsorship in place.

“Medium term, I wouldn’t say long-term, they want to progress at least with the facilities that we’ve got here the Kent Invicta League and maybe the Southern Counties East Football League. That is the medium term plan.

Mr Reeves, 59, started playing for his home-town club when he was seventeen.

“We’ve got a committee in place who want to take us further.

“With the kids’ their funding helps as well but they get upset that all the money is spent on the ground but we don’t take anything out of the kids’ football because that is theirs.”