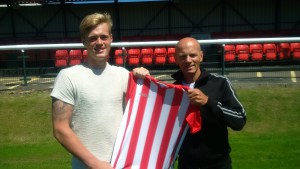 “This is a great signing for the club,” Batten told the club’s newly-created website www.sheppeyunitedfc.co.uk.

“Jordan really impressed when he played against us last season. He’s a big lad, very quick and very commanding.

“The management team and I sat down and had a good talk to Jordan about what we have achieved and ultimately where we want to be and our plans.

“We showed him around and he loved the set-up we have here.   He was equally excited at the ambition we have at the club and the way we play football.

“He remarked about our fans and how vocal they are and how much of a difference it makes.”

Cray Valley have found a replacement for Carey by bringing Rob French back to the club after he helped Sevenoaks Town finish in a club personal best of a top three finish and winning the Macron Southern Counties East Football League Challenge Cup for the first time.

“Ricky is another great addition to Whitstable.  I’ve been after Ricky for a little while now and now I’ve got his signature I’m over the moon,” said Porter.

“Ricky brings goals, pace and experience and he’s a winner.”

Pulman was part of the same Chelsea side as now Margate boss Steve Watt in a game at Charlton Athletic in the FA Academy Premier League Under 19s back in October 2001.

In goal for Charlton Athletic that day was Jack Delo, who Smith has brought to Canterbury City from Isthmian League Division One South side Herne Bay this summer.