I just want to say that the decision to step back from football for the time being is probably one of the hardest decisions to make, says Erith & Belvedere defender Rob Curtis

ROB CURTIS has explained why he has retired from playing football for Erith & Belvedere this season.

The Deres are preparing for life back in the Southern Counties East Football League Premier Division after a two-year absence but Curtis won’t be available.

“First of all, I just want to say that the decision to step back from football for the time being is probably one of the hardest decisions to make,” said Curtis, who is a London Taxi driver.

“At 26 years of age it’s a tough one but sometimes you have to prioritise.  I’ve got a few things going on this year with regards to work and what not and financially it just makes sense for me to put football to the side for the mean time and put other things and family first.”

Curtis admitted he had to make a tough phone call to Jones his manager to explain his reasons for hanging up his boots for the time being.

“Reflecting on the season just gone, what a season it was!

“Two out of three trophies and promotion, it couldn’t have gone much better.

“It was a hard phone call to make to the gaffer as I know he really wanted me to stay.

“However, it’s a great club and I know they won’t be short of players and will have a strong enough side to survive in the league.

“It’s where that could should be, so I’d like to thank Owen and the club for asking me to come down last year because it was the most enjoyable season I’ve ever had in football.”

Curtis will be keeping active during his football retirement and boxing fits perfectly with his family and work commitments.

“It’s something I’ve always loved and been around growing up,” added Curtis (left, photo: Twitter) 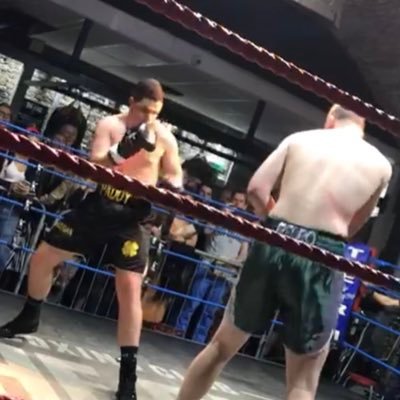 “I had my first fight last week and absolutely loved it! It’s quite different to football, everything is totally on you, no one can drag you through it like on the pitch.

“I like that, it pushes you to your absolute limit mentally and physically and if I’m being totally honest I just love getting in the ring and having a scrap!

“It’s a new thing being set up called Boxing 85 at the gym I train at The Ring Boxing Club.  It’s purely amateur but without the headguards and vests so it’s a bit more exciting and enjoyable.

“This isn’t why I’m knocking football on the head,  that’s purely for personal and work reasons as financially it makes sense for me to right now.

“But I’ll be having a couple of fights a year, that’s all. I need to do something else and stay fit and this is something I love and it’s for myself but it also feeds that competitive side in me too while I’m still young.

“It suits around work and family, also the training doesn’t take up a whole day or whole evening of my time so it works.

“I get to do something I love while maintaining work and family life balance as well, so it just makes sense.”

Curtis offered a message of support for Erith & Belvedere’s chairman John McFadden, who remains in hospital.

“I’d like to add a personal message to John.  I know he’s still fighting in hospital and I want to wish him a speedy recover.

“There’s a lot of opinions about John but from my experience this year, he’s been fantastic and I like him. He doesn’t mince his words and is openly brutally honest but he’s also very supportive and encouraging. He’s a strong man and I’m sure he’s going to get through this battle and so will his family, they’re right behind him.”