It's been a good month and long may it continue, says Bromley's award winning striker Moses Emmanuel

Bromley manager Mark Goldberg has collected the manager-of-the-month award for the Vanarama National League in their debut season. 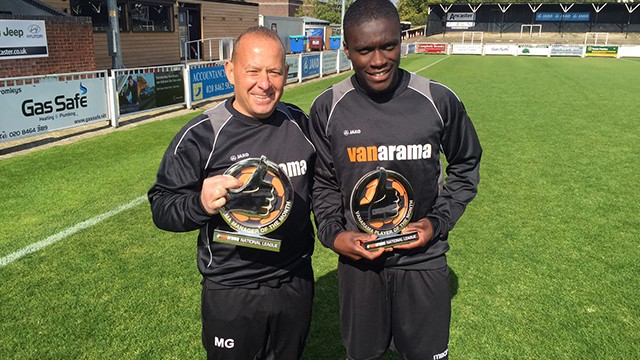 The Ravens travel to Tranmere Rovers tomorrow sitting in fourth-place in the table on 23 points from 13 games, five points adrift of leaders Forest Green Rovers.

Tranmere Rovers, who were playing League Two football last season, welcome Goldberg’s side sitting in sixth-place in the table with 23 points.

Bromley have won their last six league games and made it seven when goals from Bradley Goldberg and Pierre Joseph-Dubois knocked league rivals Dover Athletic out of the Kent Reliance Senior Cup on Tuesday night.

The 26-year-old, who is playing in the top-flight of non-league football for the first time in his career, despite previously winning three Conference South promotions, has scored 12 goals already this season, the best return in the top five divisions of English football.

Emmanuel told www.bromleyfc.tv/site:  “Really happy! It’s been a good month and long may it continue.

“It’s all about opportunity and now it’s about taking it. I’ve always known I could probably push on and it’s good to have a chance to prove myself to a lot of people who probably doubted me why I kept going back into Conference South.”

Bromley have reverted to full-time training, three times a week and have now adapted to life in the National League.

Emmanuel said: “There’s been a lot of changes and it’s probably showing now how good it’s working for us that we’ve kicked on and starting to pick up points and hopefully we can keep doing it.”

Looking ahead to the visit to Prenton Park tomorrow to play Tranmere Rovers for the first time, Emmanuel says Bromley will give their more illustrious rivals a good game.

He said: “There’s a lot of confidence in the camp right now. We know how we play. We know how to get at teams with our attacking style and hopefully we can get at them and give them a good game.”

McMahon, in his first season in the hot-seat, presided over five league wins out of five in September, to add to five in August, with his side scoring 12 goals in the calendar month.

McMahon told www.ebbsfleetunited.co.uk: “I’m delighted to receive this. Any award of this nature isn’t an individual thing.  It reflects on the staff, the players and the fans, it goes right though the club.

“I’m lucky, I have a great staff, a great bunch of guys in the dressing room and great support behind the scenes and on the terraces.

“What we’ve achieved this month and whatever we achieve for the rest of the season is down to all of us, not just a couple of individuals.

The Fleet boss was even able to make light of the famous curse of being manager of the month.

He said: “I think the judging panel decides earlier in the week so hopefully Tuesday night got the curse out of the way then.”

McMahon will receive his award before tomorrow’s home game against Maidstone United, who scooped the player-of-the-month award through  Lee Worgan’s impressive performances in goal for the newly-promoted side.