MARGATE have announced that a new planning application for stadium redevelopment including the East Stand, North Stand (Coffin End), a 120-bed hotel and further facilities have been submitted to Thanet District Council.

A club statement said: “The application has been developed in conjunction with our hotel partner IHG Hotels and the brand Holiday Inn Express to reflect the increased demand for hotel rooms in Thanet and to provide not only a first-class facility for all our teams but also a sporting hub for the community. 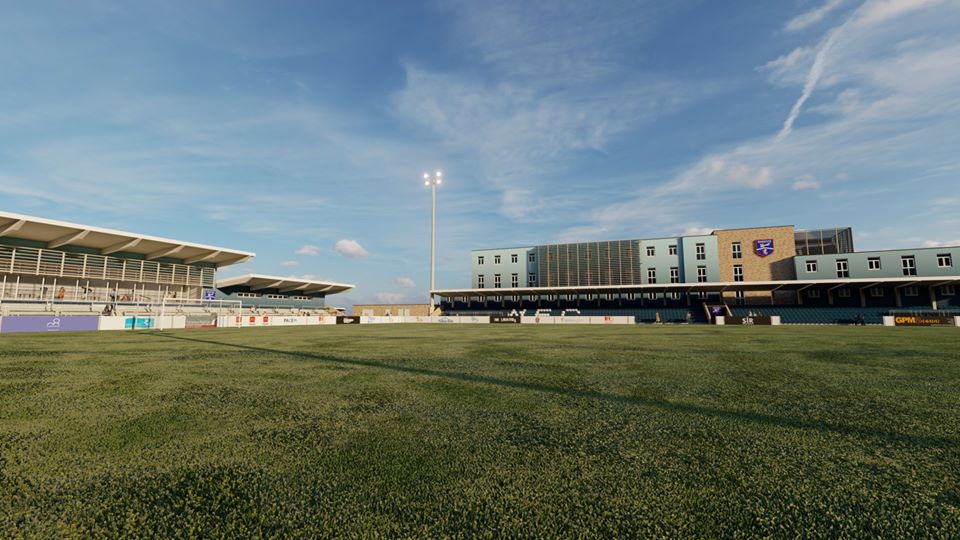 “In conjunction with the re-planning of the facilities, external experts have been engaged in preparing supporting documentation for archaeology, ecology, transportation and drainage .

“The application comprises two main elements including the East Stand and the North Stand. The East Block will comprise of a 120-bedroom hotel together with restaurant and bar facilities. The building will also include space for Margate Football Club offices and a club shop together with the stadium control room. The stand will be all-seater and have a capacity of 650.

“The North Stand will be a terrace with a capacity of 1,300 and behind this and integrated into it, there will also be space for first-team home and away changing facilities, together with ancillary spaces associated with the first team. Further on the ground floor, there will be several studio type spaces for various sports and associated activities. On the first floor, will be a café/bar facility which overlooks the pitch.

“The car park will be extended to provide 104 parking spaces and will provide access to all of the East Block offices, shop and hotel. The North End turnstiles will be renewed and relocated into the site to allow access into the ground from the car park.

“The application has been developed following pre-application meetings with Thanet District Council and Kent County Council which received a positive response and we hope we can rely on their ongoing support throughout the process.”

In a statement, chairman Terry Painter said: “This is an exciting step forward in the evolution of our plans to secure a long term, sustainable and exciting future for Margate Football Club.

“Lots of hard work has taken place to get us to this stage and I’m sure supporters and members of the local community will see these plans and be equally as excited as us.

“We hope our supporters can play their part in this by sending a letter of support or an email to the planning department at Thanet District Council indicating both their support and the need for this facility to allow Hartsdown Park to develop and grow.

“We will ensure we keep our supporters, partners and the local community fully up to date as we head to planning committee.

“The past few months have been extremely troubling and sad for many of us but hopefully this news will give everybody a bit of a boost.”

Manager Jay Saunders has added his full support for the plans, adding: “When I first spoke to the club about coming in as manager, I was shown these plans and really impressed with the vision.

“Having played for – and now managed – the club, I know how long this has been going on and I hope we can get across the line and the permission everyone at the club is hoping for.

“I’m sure in these difficult times it would give everyone at the club and our loyal supporters a massive lift and something to look forward to.”

The Isthmian League Premier Division club were hoping to have a presentation of the proposals for supporters and the local community prior to application, however, due to the current ongoing coronavirus situation, this has not been possible but as soon as it is, the club will endeavour to bring this forward.

The statement added: “In the meantime, we hope that the images and plans give you some flavour of the development and the desire to progress the club both on and off the pitch.

Once we have an application reference number, we will post on the website and social media pages so that comments of support for the proposals can be sent to Thanet District Council either by email or a letter.”