We want to improve. Play-off places have been extended, why not have a go at that, says Maidstone United boss Jay Saunders

MAIDSTONE UNITED manager Jay Saunders says his side are in a much better place going into a tougher Vanarama National League campaign.

The Stones finished in fourteenth-place in non-league’s top flight last season and says he wants to improve on that this time out. 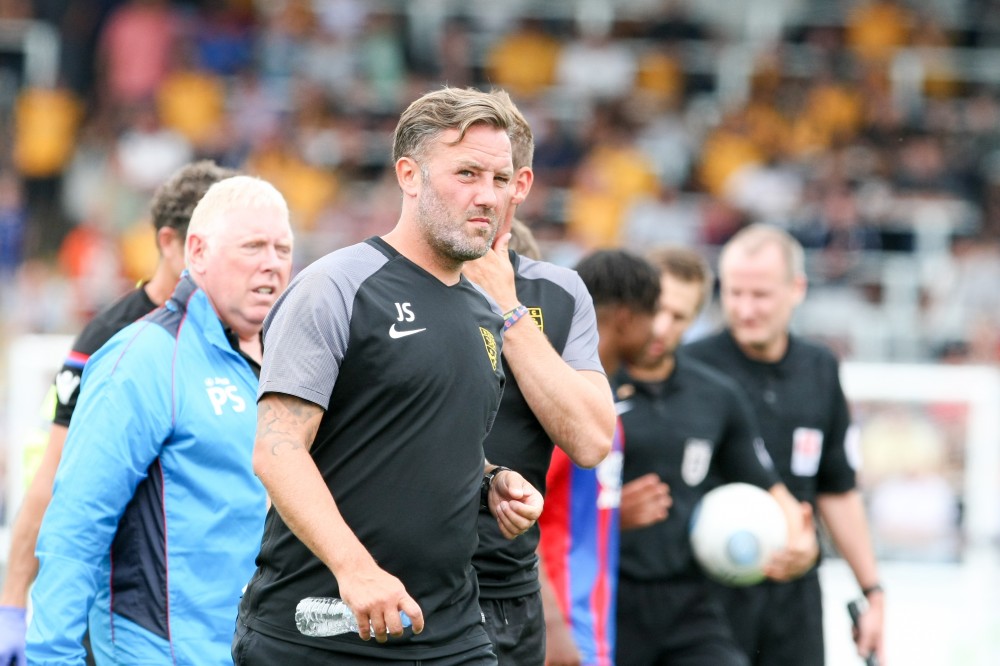 Maidstone United welcome newly-promoted Vanarama National League South champions Maidenhead United on Saturday, before travelling Ebbsfleet United, who finished a couple of points behind the Magpies in second-place and defeated Hampton & Richmond Borough and Chelmsford City in the play-offs to claim promotion.

Saunders then takes his side to Brisbane Road to play Leyton Orient on Saturday 12 August, a club that lost their Football League status after 112 years at the end of last season.

When asked about his side’s start, Saunders joked, “Nice and easy, not!

“But a home game is a good start for us. It’s tough against the side coming up. When we played York (on the opening day of last season), they were just coming into the League from League Two and you’re on a buzz from the season before (after winning promotion) and you come in and it’s all new, which can make it difficult.

“But it’s a home game, which is good for us, the crowd will be behind us and then Ebbsfleet away is a tough game.

“It’s a local derby, my old club. I had some good years there, obviously it adds a bit of spice having beaten them in the play-off final a couple of years back.  Local derbies are great, the pitch will be nice and then we play Orient, which is a great stadium to go and play at so there’s three good games to look forward to.

“As players, you’ve got to look forward to it.  I am as a manager and I think they’ll be buzzing once we get out there.”

The Stones finished in fourteenth-place in the Vanarama National League last season and Saunders is looking to improve on that and be one of the six sides that are vying for a play-off place.

“We want to improve.  Play-off places have been extended, why not have a go at that,” said the Bearsted resident.

“There’s no point in going ‘let’s just try and stay up again’, because you want to improve every year.

“Boreham Wood came up (with Bromley), struggled the first year and improved the second year.  We look to do that but why not aim to try to make the play-off’s?

“I’m not saying it’s going to happen but we’ll give it our best shot and that’s our aim.”

With club’s like Tranmere Rovers, Leyton Orient, Hartlepool United and Wrexham in the top-flight of non-league football, Saunders believes things are getting tougher.

He said: “Do you know what? It’s going to be so much tougher this year.  You look at the teams that have come into the League from League Two, Hartlepool and Leyton Orient, they’re big club’s and it’s getting tougher every year, hence why we’re training daytime.  We’re trying to be more professional in the way we look after the boys and the boys have taken it on board and if they don’t they’re in for a struggle.

“I am very pleased to get the chance and hope something comes out of it,” Dorling told www.maidstoneunited.co.uk.

“I’ve had a good first year at the Academy and taken a lot of advice from the coaches and players.  It’s been great training with the first team during pre-season and getting experience of men’s football ahead of this trial.”

Saunders also told the club website: “I’m delighted for Josh, he’s a good kid with a great future ahead of him.  To get the opportunity to trial at a Premier League club is an achievement in itself.  I am sure he’ll give it his all and we wish him every success.”