The hope is to progress and be a well-established Southern Counties East Football League club within the next three to five years with everything ran right from top to bottom, says Larkfield & New Hythe boss Kris Browning

LARKFIELD & New Hythe manager Kris Browning says he’s feeling over the moon with the news that the clubs floodlight application has been approved by Tonbridge & Malling Borough Council.

The New Hythe Lane outfit were sitting at the top of the Kent County League Division One Central & East table at the time of competition being halted due to Covid-19 restrictions and this news will help with the club’s main objective of sealing a place in the Southern Counties East Football League First Division. 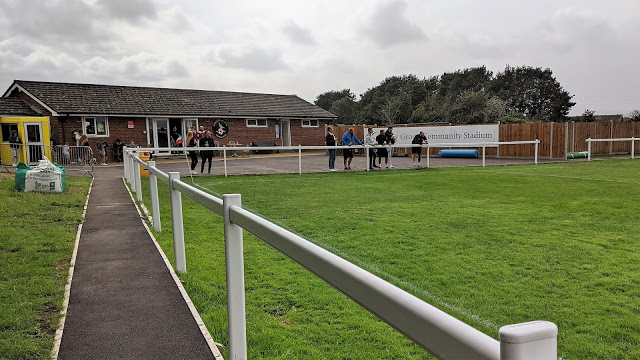 The Larks said in a statement: “Great news. Finally, the floodlights planning application has been fully approved by Tonbridge & Malling Borough Council.

“This required the agreement of a management plan which was the primary condition action from the original approval. We are now fully approved to install the floodlights.”

Browning was in charge of Aylesford Paper Mills (which went through various name changes due to sponsorship deals) in the Kent County League and was in the dug-out alongside Graham Martin when the club changed its name to K Sports and secured promotions into the ninth-tier of English football, the Southern Counties East Football League Premier Division.

The seeds have been sown to ensure ambitious Larkfield & New Hythe Wanderers follow in the same footsteps as the club on the other side of the M20 in neighbouring Aylesford.

“We are over the moon to get this application over the line,” said Browning.

“It’s a small community football club so to achieve this with the rest of the things we have done at the ground in the last year is remarkable, to say the least.

“Having joined the club just over a year ago, I always felt the club had massive potential to move up the football ladder. I have done it before and feel I can do it again.

“Obviously, this helps having the right people around me who know football and how a football club should run.

“The ground has gone from a piece of land where people fly- tipped and abused the facilities to a small community football stadium, which will hopefully continue to improve our club from the youth section through to the senior section.

“Before the pandemic, we were attracting crowds of around 150 spectators and we feel the people of Larkfield & New Hythe and surrounding areas will continue to support the club and hopefully buy into what we are trying to achieve for the community and football club.

“Lawrence Coopen, John Mitchell, Graham Martin, and Adam Handy, who are the board of directors, have been nothing but exceptional for the improvements they have made to this club in the last year.

“The hope is to progress and be a well-established Southern Counties East Football League club within the next three to five years with everything ran right from top to bottom.

“As we own the ground everything that comes in goes straight to the football club, gate takings, bar takings, sponsors donations, everything.

“This way we can continue to improve and invest in our club and facilities, the potential is massive.

“At the moment we are all stuck in the Covid-19 pandemic but it will end one day and when it does we will be ready to get this football club running again, hopefully like everyone else in life and in football.”

The Larks won seven of their eight league games and were seven points clear of Hollands & Blair’s Reserves at the time of the football suspension.

They last took to the field on Saturday 24 October 2020, going down to their only league defeat of the season, losing to a single goal to Rusthall Reserves at Jockey Farm.