We wish Kirsty Dowle every success and look forward to seeing her flourish on the international stage, says Kent FA

Kent referee Kirsty Dowle has been promoted to the international list of FIFA referees within the women’s game.

Dowle’s journey in the game started at the age of six when she played locally before finding it increasingly difficult to find a team that she was able to play within, due to a lack of female sides. 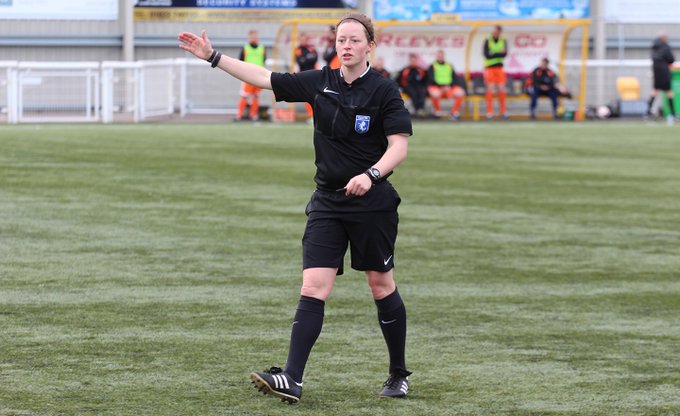 Kirsty Dowle: It's great to be a part of a league that is progressing at such a rapid rate.
Photo: Kent FA

Whilst at university researching for her PhD, which focused on psychological elements within refereeing, she was encouraged by those she interviewed to enroll onto a referees’ course.

“I started refereeing youth football in 2013," Dowle said in an interview with the Kent FA.

“I then began to enjoy the challenge of refereeing men’s open-age football. From then on I have progressed through the men’s leagues to where I am now – a Level 3 referee, overseeing semi-professional men’s football.”

Through attaining Level 3 status, Dowle has also been able to progress within the women’s game.

“I have enjoyed my time officiating women’s football,” she said.

“I am in my second year of refereeing in the Women’s Super League and it’s great to be part of a league that is progressing at such a rapid rate.

“In 2018, I was very fortunate to attend the UEFA Centre of Refereeing Excellence (CORE) in Switzerland, where we went to camps designed to prepare us for the expectations of international football.

“I took part in fitness testing, laws of the game tests, offside and body composition and injury prevention examinations.”

Recently, Dowle was appointed to the Women’s FA Cup Final in 2018, where she acted as assistant referee for the clash between Arsenal and Chelsea in front of a record 45,000 crowd at Wembley Stadium.

“This is something that, when I first started six years ago, I wasn’t even aware could be a possibility,” she said, of her name being added to the FIFA international list.

“It is only in recent times that it has become a dream of mind. I appreciate that I will need to work hard, but I will learn so much as an international official. I’m very grateful for the opportunity that I have been given and I can’t wait to represent the Kent FA and The FA on an international stage.”

He said: “This is a fantastic achievement for Kirsty, which epitomises hard work, dedication and commitment to reaching the very top level of the game.

“Everyone here at Kent FA is extremely proud of her FIFA appointment and it heightens the awareness of what you can achieve if you’re determined enough.

“We wish Kirsty every success and look forward to seeing her flourish on the international stage.”

For more information on refereeing in Kent, please contact Nick Dunn at nick.dunn@kentfa.com.