Justin Edinburgh: Tributes pour in from the mourning football family after the sad passing of Leyton Orient manager, aged 49

Tributes have been made by a mourning football family after hearing the sad news that Leyton Orient manager Justin Edinburgh has passed away, at the age of 49.

Edinburgh, who also managed Fisher Athletic and Gillingham, suffered a cardiac arrest last Monday and the news of his death has devastated the football family.

Edinburgh guided the O’s to the Vanarama National League title at the end of last season and lost 1-0 to their league rivals AFC Fylde in The Buildbase FA Trophy Final on the same day that Cray Valley (Paper Mills) lost 3-1 to Chertsey Town after extra time in The Buildbase FA Vase Final at Wembley Stadium.

Edinburgh interupted the press conference wanting to shake Anderson's hands for "his luck to rub off on him," before his Leyton Orient side graced the hallowed Wembley turf. 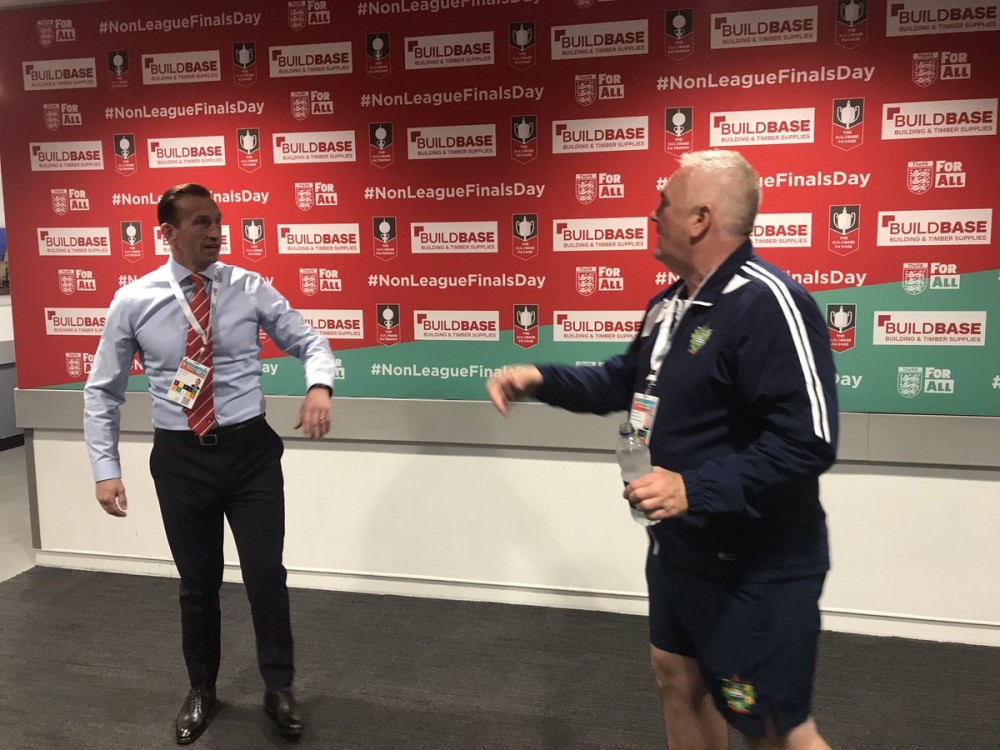 On this exchange, journalist Tim Fuell said: "This will be one of my abiding memories of Justin Edinburgh at Wembley last month on National Finals Day.  His boundless enthusiasm for the game, his huge respect and friendship for Dave Anderson, who had just won the Vase and his own aura that would light up a room.  RIP."

Leyton Orient chairman Nigel Travis said in a statement that was published on www.leytonorient.com: “We are completely heartbroken by this tragedy.

“All our thoughts and love are with the Edinburgh family and we know from the messages that have flooded into the club over the last week that the wider football world will share our sentiments.

“The success that Justin brought to Leyton Orient was incredible but more importantly the impact he had on us all as a winner and a wonderful, inspirational human being will be his legacy and will stay with us forever.”

Leyton Orient centre-half Josh Coulson, 30, said: "Heartbroken right now. Devastated. Gaffer you made me fall back in love with the game. And to be a champion with you will stay with me forever. Rest well up there."

Edinburgh joined the O’s as Head Coach in November 2017 and having secured a mid-table finish in his first season, went on to lead the club back into the Football League as National League champions in April 2019.

Having started his playing career at Southend United, where he made 37 appearances and helped the club win promotion from Division Four, he was transferred to Tottenham Hotspur in 1990 and went on to make 215 appearances, scoring once and being part of both FA Cup and League Cup winning sides during a decade at White Hart Lane.

Three years at Portsmouth followed before the Basildon-born full-back returned to Essex to end his playing career as player manager of Billericay Town between 2003 and 2006.

His next stop was Fisher Athletic, who he steered to promotion in his first season, before spells as assistant manager at Grays Athletic and Woking.

In February 2009 he was named manager at Rushden & Diamonds after originally joining the club as assistant but left for Newport County after the Diamonds went into administration.

Edinburgh led Newport to promotion from the Conference Premier via the play-offs and also to the final of the FA Trophy.

After Gillingham agreed terms with Newport for his services, he moved to Priestfield Stadium for two years before a brief spell at Northampton Town in 2017.

The Leyton Orient statement added:  “But it was at Orient, in what turned out to be his final managerial position, that Justin enjoyed his biggest success, winning 45 and drawing 21 of his 82 matches in charge of the club and securing the National League title and a return to Wembley for the FA Trophy Final.

“All our thoughts are with Justin’s wife Kerri and their children Charlie and Cydnie at this very sad time.”

A statement from Fisher Football Club said: “Horrible news this evening, Rest in Peace Justiin and thanks for everything you did for Fisher Athletic and the wider footballing community.”

Nick Davis, the current Ramsgate manager, was a centre-half for Fisher Athletic.

"So sad to hear the news of Justin, my old Fisher manager and a top bloke. Very sad. He was a genuine nice man. RIP Justin."

Chris Piper, a midfielder, now retired, who played under Edinburgh at Fisher Athletic, said: "Gutted with the news about Justin Edinburgh, former manager of mine. What a lovely man he was. RIP."

Bradley Dack, a midfielder now at Blackburn Rovers, played under Edinburgh at Gillingham.

"Devastated doesn't even cut it! What you did for me on and off the pitch made me who I am today and I will be forever grateful. You was more than just a manager to me, you was a great friend and the world is a much worse place without you. Love you mate. RIP Justin."

A statement from Champions League runners-up Tottenham Hotspur said: "We are deeply saddened and shocked to hear of the passing of Justin Edinburgh. Our heartfelt condolences and thoughts go out to his family and friends at this terribly difficult time as well as everyone that worked alongside Justin at Leyton Orient."

Neil Ruddock, a team mate at Tottenham Hotspur, said: "Absolutely devastated to hear that my friend, an ex team-mate Justin Edinburgh has passed away.  My thoughts and prayers are with Kerri, Charlie, Cyndie and family. Rest in Peace mate."

Chatham Town manager James Collins said:  "This Justin Edinburgh news is beyond sad. It’s amazing to read about the amount of lives he touched. His success in football will be remembered but the legacy he has left as a person, is the ultimate gift. Thoughts go out to his family and to all the people who’s lives he graced."

Jamie Day, the former manager of Welling United, who now manages the Bangladesh national team, said: "So sad to hear the news about Justin Edinburgh. He was a good guy and manager, who has been taken away far too early and will be deeply missed by everyone who knew him.  It makes you realisemake the most of your life and the moments with your family."